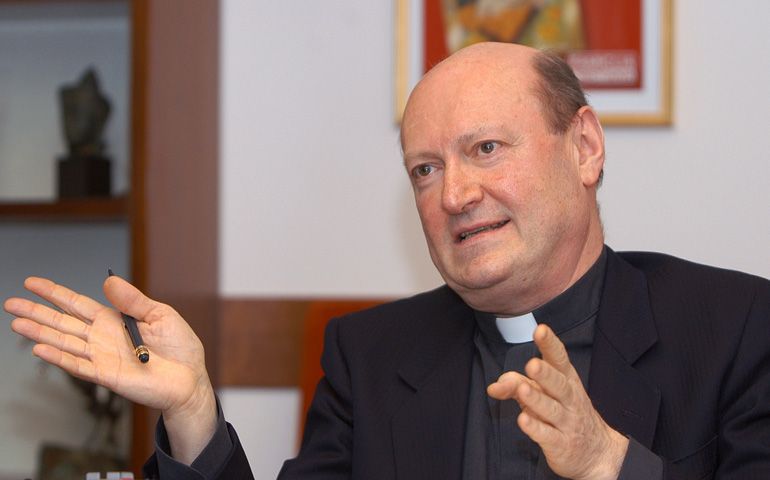 To date I haven’t included Italian Cardinal Gianfranco Ravasi in my daily sketches of papal contenders, largely because I published a profile of him on the first day of the Vatican’s Lenten Retreat, which was led by the 70-year-old President of the Pontifical Council for Culture.

That profile can be found here.

Suffice it to say that I’m sticking to my guns: In many ways, Ravasi really is “the most interesting man in the church.”

Ravasi drew good reviews for his meditations during the retreat, organized as a series of reflections on the Psalms. At the end, Pope Benedict XVI thanked him for his “brilliant” work – “brilliant” being a word that often tends to crop up in sentences about Ravasi.

In most media reports, the only line from the retreat that got much play was Ravasi’s reference to “divisions, dissent, careerism [and] jealousies”, which made a nice sound-bite amid the “Vatican gay lobby” furor touched off by the Italian media.

Those who sat through the entire week-long experience in the Vatican’s Redemptoris Mater chapel, however, seemed to have favorable impressions. One cardinal said halfway through the week that Ravasi was coming off as “extremely impressive.”

Here’s the logic for Ravasi as the next pope.

First, he’s clearly got the cerebral heft. Whenever Ravasi appears in public, he coughs up literary allusions the way two-pack-a-day smokers do phlegm – regularly, and without thinking about it. In December 2010, he offered an impromptu welcome for a lecture at the Vatican by a Cambridge cosmologist. In the course of fifteen minutes, Ravasi cited Nietzsche, Kant, Levi-Strauss, Stephen J. Gould, and Isaac Newton – a pace of one quotation every minute and a half.

For bonus points, Ravasi added that he’s read not only Newton’s best-known works, but also his obscure commentary on the Book of Revelations – which, Ravasi laughingly said, was “awful”. He’s able to range so widely in part because he only sleeps about four hours every night, and he generally fills that extra time with books.

Second, Ravasi also has a striking popular touch. Whenever he goes back to his native Milan to speak he draws overflow crowds, often composed of young Italians not otherwise beating down the church’s door.

From 2002 to 2007, Ravasi wrote a daily column in the Italian Catholic daily Avvenire. Called “Mattutino”, or “morning prayer”, it offered a short thought for the day, often accompanied by a quote drawn from an array of authors, and was highly popular.

Third, Ravasi is a Vatican insider, but one not associated with any recent crisis. Many cardinals want the next pope to clean house inside the Vatican, but they also want someone who knows the system. Those are two qualities tough to find together, since creatures of the bureaucracy often aren’t necessarily the right ones to reform it.

Ravasi, however, is that rare figure who’s seen as in the Vatican but not of it.

He clearly has the courage of his convictions. In 2009 he hosted a Vatican conference on evolution, inviting scientists and believers into dialogue – despite what he called the “terror” of some in the Vatican, who felt it might open doors better left closed. (Ravasi said that Benedict XVI backed him on the project “completely”.)

Fourth, Ravasi could strike some cardinals as the ideal candidate to be the church’s “Missionary-in-Chief.” He’s a man of Christian tradition fully at home in the post-modern world. He’s also media savvy, and has thought carefully about how the church ought to engage the new communications revolution – what it means to evangelize in the age of kindles and iPads, 4G mobile phones and netbooks.

“We can’t just say that in order to maintain the purity of our message, we’re going to keep on using the same categories,” Ravasi said in a 2010 interview with NCR. “The result of that is usually that people don’t understand anything we say. What you get is deafness, not communication.”

Fifth, Ravasi is an admirer of Benedict XVI who’s conventionally seen as fairly conservative in theological terms. (There was a minor kerfuffle back in 2002 when Ravasi published an article about Easter, in which he said that Jesus was not “risen” from the dead, but that he “arose.” Some thought the comment heterodox, and three years later that doubt may have cost Ravasi an appointment as the bishop of Assisi. Benedict XVI, however, removed all doubt by naming Ravasi to his Vatican post.) No one, however, thinks of Ravasi as an ideologue.

There are also some fairly serious reservations.

First and perhaps most consequentially, Ravasi has almost zero pastoral experience. He’s never led a diocese, and his only real administrative position was heading the Ambrosian Library in Milan. Typically, many cardinals believe that a good dose of in-the-trenches pastoral seasoning is a sine qua non.

Second, Ravasi faces a problem of electoral math. He’s never been part of any particular Italian faction or circle of influence, preferring to go his own way. That’s part of his charm, but it also means that he has no natural base of support, no bloc of fellow cardinals whose votes are already in his pocket.

One veteran Italian Vatican-watcher said today that Ravasi doesn’t have “one tenth” the support among the Italians as Cardinal Angelo Scola of Milan, for precisely this reason.

Third, some cardinals may see Ravasi as cut a bit too much from Benedict’s cloth – a scholarly personality who prefers the life of the mind to the nuts and bolts of running the church. In an atmosphere in which they want the next pope to take control of the reins of government a bit more firmly, that could be a drawback.

Fourth, even some cardinals based in Rome say they don’t know Ravasi well, aside from what they read in the papers. That’s a telling reaction to a man who’s worked in the Vatican since 2007, and who’s been part of the Italian church scene his entire life. Ironically, Ravasi may be more familiar to secular philosophers and academics than to many of his fellow cardinals.

Of course, in a race with no clear frontrunner, even longshot candidates may stand a better shot at breaking through. Perhaps those cardinals for whom Ravasi’s Lenten Retreat is still fresh may keep him in the back of their minds, especially if things get complicated and the candidates on today’s “A list” don’t seem capable of crossing that magic two-thirds threshold.

India is a rising Catholic power too