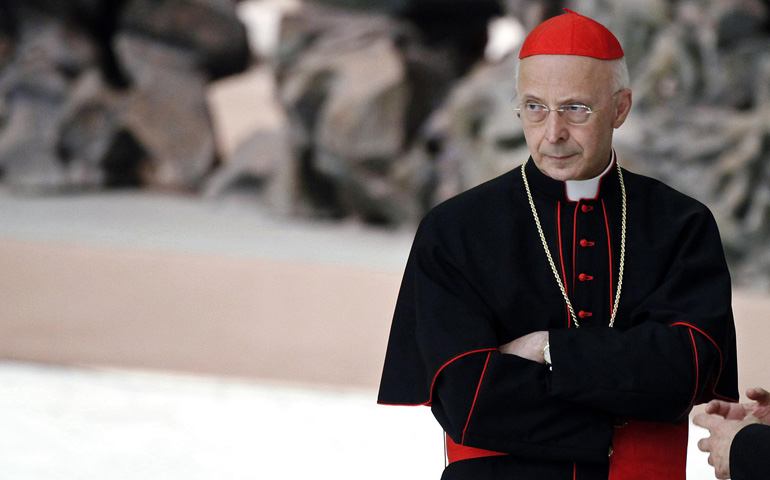 Back in 2000, former U.S. Ambassador to the Holy See Ray Flynn and writer Robin Moore published a novel called The Accidental Pope. Although they didn't have Cardinal Angelo Bagnasco in mind, if the 70-year-old Italian gets elected, there's a sense the title would fit him like a glove.

At one level, the contest was between moderates, who wanted Cardinal Dionigi Tettamanzi of Milan, and conservatives, who wanted someone like Cardinal Angelo Scola (then of Venice, now in Milan) or perhaps Cardinal Carlo Caffarra of Bologna.

In another sense, it pitted Cardinal Camillo Ruini, the über-powerful Vicar of Rome and president of CEI during the John Paul years, against Cardinal Tarcisio Bertone, Benedict's Secretary of State. That clash wasn't over ideology, but primacy. John Paul had let Ruini do the heavy lifting in Italy, but Bertone aspired to become the new point of reference. Neither wanted a third player in the game, so they settled on Bagnasco, who seemed sufficiently low-profile to stay out of the fray.

Bagnasco remained in his archdiocese of Genoa rather than coming to Rome, which at the time was read to mean he would keep the wheels of CEI grinding while Ruini and Bertone slugged it out.

The bottom line is that Bagnasco was thrust into the spotlight largely because he profiled as someone who wouldn't do much with it. Over the last six years, however, something unexpected happened: He grew into the role.

As it turns out, Bagnasco had been quietly preparing for his star turn all along.

The son of a baker, Bagnasco was born in the small town of Pontevico in Italy's Lombardy region. He grew up in Genoa, where he became a disciple of the port city's legendary Cardinal Giuseppe Siri. (Widely believed to have been a candidate for the papacy in 1958 and1963, as well as the two conclaves of 1978, Siri was a conservative lion. Journalist Benny Lai once published a biography of him titled The Pope Never Elected.)

As a young priest, Bagnasco studied metaphysics (he's a convinced Thomist) and contemporary atheism at the University of Genoa, and complemented those academic interests with deep pastoral experience, among other things working as a chaplain for the scouts and for a federation of Italian university students. Despite his ties to Siri, Bagnasco never came off as intransigent; people who remember him from those days say he struck them as smart and keenly pastoral, with a gift for mediation and holding people together.

In 2003, Bagnasco was named Archbishop of the Military Ordinariate in Italy, a complex job because the military is scattered all across the country and the world, but one that typically isn't seen as a political stepping stone because there's no local church to lead and no local media to pay attention. Yet in 2006, when Bertone left Genoa to work for Benedict XVI, Bagnasco was tapped to take the reins.

At CEI, Bagnasco has led the opposition to civil recognition of same-sex couples, once stirring controversy when he appeared to compare homosexuality to incest and pedophilia. (Amid the furor, an anonymous envelope arrived at Bagnasco's office containing a single bullet and a picture of the archbishop with a swastika carved into it.)

Bagnasco also upheld a strong line against euthanasia in the anguished 2008 right-to-die case of Eluana Englaro, a 37-year-old woman who entered a persistent vegetative state in January 1992 after a car accident. She'd been kept alive by a feeding tube, which her father wanted to remove on the grounds that Englaro did not wish to live that way. The case became a national cause célèbre, comparable to the American debate over Terri Schiavo in 2005.

The father's wish was eventually granted, and Englaro died in 2009.

In general, however, Bagnasco has tried to lead the bishops into the political center, embracing the moderate government of technocratic Prime Minister Mario Monti and distancing them from their de facto alliance with the flamboyant conservative Silvio Berlusconi. On matters of social justice, Bagnasco has insisted that people have a right to employment and has questioned a press from Italy's business community for greater workforce flexibility, generally seen by pro-labor groups as a pretext for watering down job security.

Though the Italian church has yet to live through a massive sexual abuse crisis analogous to the United States, Ireland and other parts of the world, Bagnasco has taken positions that could allow him to be seen as a reformer. In 2010, he acknowledged that bishops may have covered up abuse in the past, saying such silence "must be corrected and overcome," and also indicated he was willing to meet with abuse victims "at any time" and expected his brother bishops to do the same thing.

Bagnasco called the sexual exploitation of children a "heinous crime."

Now 82, Ruini has withdrawn from the public to-and-fro, seemingly content with the role of elder statesman; Bertone's political heft has been compromised by perceptions of disarray in the Vatican. Bagnasco has filled that vacuum, emerging as an articulate, well-reasoned, and smiling pitchman for the church's concerns.

The case for Bagnasco as pope boils down to four points.

First, he's seen as someone adept at navigating the shoals of Italian ecclesiastical politics, a figure with friends in all the different camps, who's kept CEI largely intact and avoided any major fractures or embarrassments. At a time when many cardinals want someone who can put the Vatican back in order, that résumé could seem appealing.

Second, Bagnasco's pedigree as a disciple of Siri makes him more than acceptable to the traditionalists in the College of Cardinals, but his profile as a pragmatic centrist also means he could draw support from moderates.

Third, Bagnasco's academic study of contemporary atheism and his capacity to project a reasonable voice for the church in public affairs, unwavering on substance yet gentle in tone, could strike some cardinals as the right fit in terms of engaging an increasingly secular world in the 21st century. He also speaks multiple languages, generally seen as a basic requirement of the job.

Fourth, Bagnasco's history of being a compromise solution to thorny political problems could come in handy. By consensus, there is no clear front-runner in the 2013 conclave, and it's entirely possible that votes in the early rounds could splinter among two or three strong candidates. If none seems positioned to reach a two-thirds majority, heads may begin turning towards a figure more or less palatable to everybody, even if he didn't start out as their first choice.

On the other hand, there are some compelling reasons why Bagnasco might not pass the smell test.

First, there's an anti-Italian humor among some cardinals who see the recent breakdowns in the Vatican as the product of internal Italian squabbles. Reform, in their mind, often means breaking the Italian stranglehold, which doesn't seem to bode well for an Italian pope.

Second, Bagnasco may be recognizable in Italy, but he's not well known anywhere else. Some cardinals may worry about rolling the dice on someone they don't know all that well, especially at a time when the church faces fresh scrutiny amid various scandals, either real or invented, swirling in the global media.

Third, despite Bagnasco's polish and intellectual depth, some cardinals may question how effective he is at moving the ball vis-à-vis the church's concerns. In the recent Italian elections, for instance, Bagnasco and CEI appeared to back Monti's re-election bid, yet the incumbent barely got 10 percent of the vote. If that's the best Bagnasco can do in his own backyard, some cardinals may wonder, what can we expect him to accomplish in other parts of the world?

Fourth, Bagnasco was a player in the surreal "Boffo case" in 2009 and 2010, when the editor of CEI's newspaper was accused of harassing a woman because he wanted to pursue an affair with her fiancé. When it emerged that some of the supposed police documents in the case were fake, conspiracy theories accused senior Vatican personnel, including Bertone and the editor of the Vatican newspaper, of being behind the plot. Bagnasco backed Boff throughout, and later named him director of the bishops' TV network.

Despite an avalanche of commentary and coverage, at the end of the day, the truth of the matter still seems murky. Though most cardinals outside Italy probably weren't paying much attention, there may still be some question marks about Bagnasco's handling of the situation.

Despite those drawbacks, nobody paying careful attention to pre-conclave dynamics would count Bagnasco out of the running. In a wide-open field, somebody with a reputation for smarts, being orthodox yet pragmatic, and generally managing to keep his nose clean might just stand a decent chance.