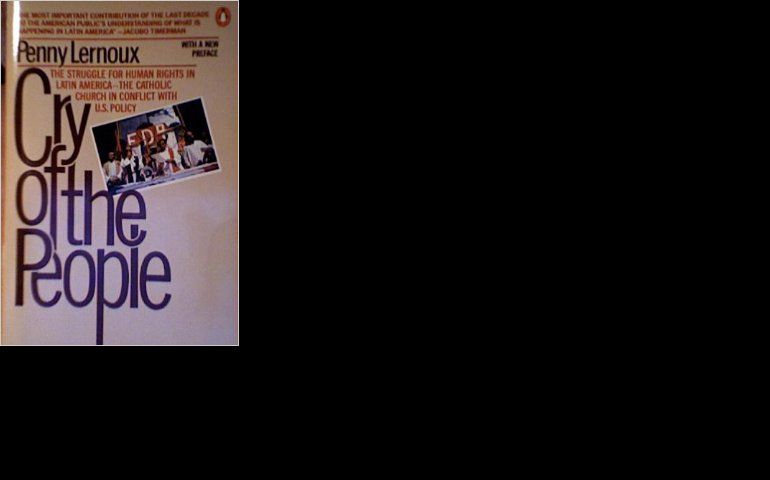 Were our church the more democratic, more lay open, People of God church we are meant to be, she would have been proclaimed a saint long ago.

Lernoux’s most notable book, Cry of the People (Doubleday), a book about the struggle for human rights in Latin America, was published in 1977. It detailed the emergence of the Latin American church “preferential option for the poor” following Vatican II.

NCR editor Arthur Jones brought Lernoux aboard the NCR ship as Latin American correspondent in the late 1970s. She continued in that capacity her death in 1989.

Quoting W.H. Auden, she concluded Cry of the Poor with these words:

To choose what is difficult

as if it were easy,

I later wrote that those words offered clues to an understanding of that special grace that glued together Lernoux's frenetic 49 years. If it wasn't a trip to Peru this week, it was off to Bolivia next. If it wasn't an NCR article this issue, it was to finish another book chapter by the end of the week.

It was on Sept. 7, 1989 she called me and shared the shocking news. A cancer diagnosis. That day she concluded the call with the words, "All we can do is trust in God." She repeated: "Trust in God."

The call remains: To choose what is difficult. To live the faith. We are called to that same option for the poor, in faith, of which she wrote so elegantly.

A quarter century after her death I continue to miss her sparkling journalism, her keen Latin American and church analysis, her personal and professional option for the poor. I miss her self-deprecating humor, her sharp wit, lust for life, generosity of spirit and the bold joy she brought to each endeavor.

Hers was a life grounded in faith but lived in hope. As if to say: "Yes, the poor, but God's plan's not finished yet."

Lernoux later focused on the clamping down on dissent in Latin America by John Paul and then Joseph Cardinal Ratzinger. This was the topic of her third book, People of God: The Struggle for World Catholicism, published in 1989.

Lernoux described Pope John Paul’s attempts to fortify an authoritarian model of church as an effort to restore preconciliar Roman Catholicism. The book documented the Vatican’s dismissal of scholars and theologians who questioned the direction of John Paul's papacy.

Those who questioned often advocated a different form of theology from that which carried the papal seal at the time: inductive theology, a theology coming out of experience, out of circumstance, the theology that formed the grid of liberation theology and feminist theology and eco-theology, and, ironically, the very theology now in re-discovery at the Synod on the Family.

Thank you, Penny, for all you gave to so many, for being a voice of the poor in Latin America.

The Times that Tries Some Catholic Souls

Ohio parishioner on new missal: 'If it ain't broke, don't fix it'

Martin Luther King and a 'Day of Service'