A pilgrim's reflection on the feast of the Assumption 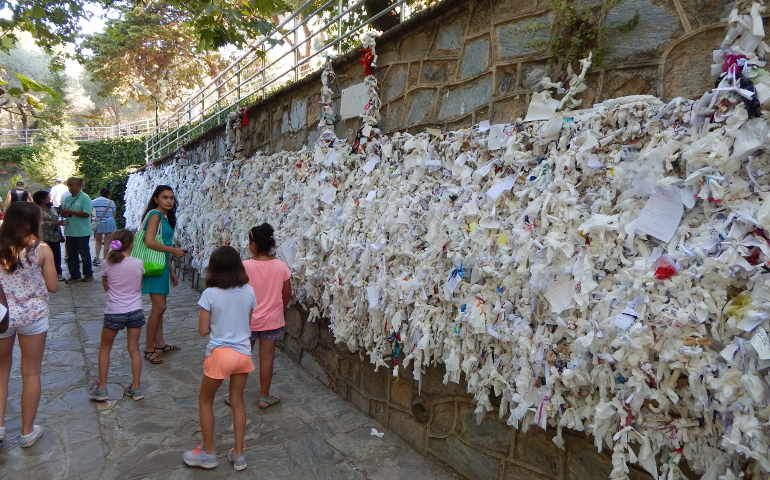 Pilgrims to the House of Mary write petitions on strips of paper and tie them in knots to the Meryemana Wishing Wall at the front of the house.

Ephesus, Turkey — Since at least the fourth century, August 15 has been commemorated in Catholic churches as the Feast of the Assumption, in the belief that the Virgin Mary was bodily "assumed" into heaven at her death. In the 1950s, Pope Pius XII defined the Assumption as dogma, one of the few times papal infallibility has ever been invoked.

The ancient feast is known as the Dormition of the Theotokos, or the Falling Asleep of the Blessed Virgin Mary among the Eastern and Orthodox churches, and in many countries, like the war-torn Syria, it is a national holiday.

On a recent trip to Ephesus to visit the low stone house revered by local custom as the home of the Blessed Virgin Mary, I found the pilgrim road eerily quiet as I reflected on the violence sweeping the Middle East. In the wake of the recent coup attempt in Ankara, heavily armed Turkish soldiers stood watch at the gate as pilgrims and tourists strolled past four fountains to the door of the house. Empty souvenir shops lining the roads nearby were a testament to the fearfulness of foreign visitors who just a year ago waited more than an hour to pay their respects in a place once visited by Pope Paul VI (1967), St. John Paul II (1979), and Pope Benedict XVI (2006).

According to the Acts of the Apostles, many of Jesus' disciples scattered abroad after the Roman Emperor Caligula visited Jerusalem and King Herod Agrippa beheaded John's brother James in 44 c.e., making him the first apostle to be martyred. The writings of Justin Martyr, and the apocryphal Acts of John, indicate that John traveled to Ephesus on the southwest coast of Asia Minor and began a ministry of conversion there. Because of the account in John's Gospel about Jesus' commending his mother to John's care, tradition holds that John took her with him to Ephesus.

Roman-era Ephesus was a remarkably sophisticated city, with long marble-paved streets that extended from the Roman baths high above the valley down to the Library of Celsus -- one of the three great libraries of that time. A large "pleasure house" recently excavated across the street was thought to have been connected to the library by a tunnel, for those male patrons who preferred to be perceived as bibliophiles rather than voluptuaries.

St. Paul, who arrived later and resided in Ephesus for almost two years, was thought to have earned a living making tents that were sold in the enormous marketplace below, when he wasn't holding court in the library or arguing with the other men in the elaborate and innovative public water closet. The Temple of Diana, one of the Seven Wonders of the Ancient World, was at the center of life there, and the movement toward Christianity significantly challenged the traditional openness of this Greek city to foreigners and new ways of thinking.

Tradition holds that amidst all the violence of that time, John retreated with Mary up the forested hills to the south, four and a half miles to a peak at 1,400-feet elevation called Solmisos-Aladag. There are competing stories about whether Mary died there and was subsequently raised from the dead before being assumed into heaven. Also, there is a competing school of thought (and another celebrated tourist attraction) in Jerusalem, where some traditional accounts place Mary at the foot of the Mount of Olives at the time of her death.

But a small Byzantine church was constructed above Ephesus in the 13th Century on the site, called the "Monastery with Three Gates." A group of French researchers rediscovered it in the 1890s, and a French nun named Marie de Mandat Grancey purchased the property and paid for repairs at that time. The future Pope John XXIII traveled there to commemorate the 1500th anniversary of the Council of Ephesus in 1931, but was unable to reach the House of Mary due to the wild condition of the paths to the summit. In 1950 the Turkish government built a road up the mountainside, making possible a true renovation that constructed the current three-arched stone house on the old Byzantine church's foundation.

The renewed interest may have been motivated by an extraordinary event in the life of the church, when Pope Pius XII declared as dogma that same year that the Virgin Mary "having completed the course of her earthly life, was assumed body and soul into heavenly glory," in his controversially "infallible" apostolic constitution Munificentissimus Deus.

As the world recovered from its greatest existential crisis, in the years following World War II, the church turned to a small place on a hillside in Turkey to find new inspiration for a higher vision of the bridge between the human and the divine.  This year a steady stream of both Muslims and Christians are traveling to revere this place, despite the danger of our own time, in search of Mary, the mother of Jesus.

[Patrick Whelan, a former NCR board member, is a physician with the Heritage Provider Network in Los Angeles, lectures at the Keck School of Medicine, and is on the Academic Advisory Board of the Institute for Advanced Catholic Studies at the University of Southern California.]

Editor’s Note: NCR has written about the House of Mary in Ephesus several times in recent years. The stories include:

A pilgrim's reflection on the feast of the Assumption

Sisters express sadness over the death of Sr. Letta Mosue

Solemnity of the Assumption of the Blessed Virgin Mary: A practical creed