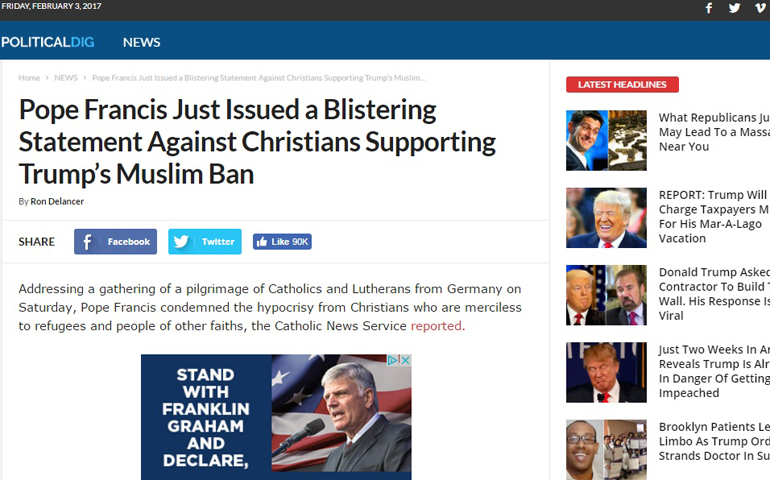 "Pope Francis Just Issued a Blistering Statement Against Christians Supporting Trump’s Muslim Ban" screams the headline. Only problem is that it is not true.

The story by Ron Delancer in politicaldig.com cites as its source a CNS story that ran in the Catholic Herald on Oct. 13, 2016. That's right October! Before Donald Trump was even elected president.

The CNS story clearly states that the pope was speaking to German pilgrims on Oct. 13, but the blogger blithely ignores the facts for the sake of a good headline. Nowhere in the CNS story is the name Trump or the words "executive order."

For a more up-to-date report on Pope Francis' views, CNS provided an excellent story yesterday (Feb. 2). Carol Glatz reports that when asked about Trump's recent actions on immigration, Archbishop Angelo Becciu, a top official in the Vatican Secretariat of State, responded, "Certainly there is concern. We are messengers of a different culture, that of openness."

Glatz notes that the pope, "himself the son of Italian immigrants who moved to Argentina in the 1920s, has long spoken of the need to protect the rights and dignity of migrants and refugees."

She then proceeds to give a sampling of his most forceful pronouncements:

Pope Francis is good enough in his own words without making up headlines.