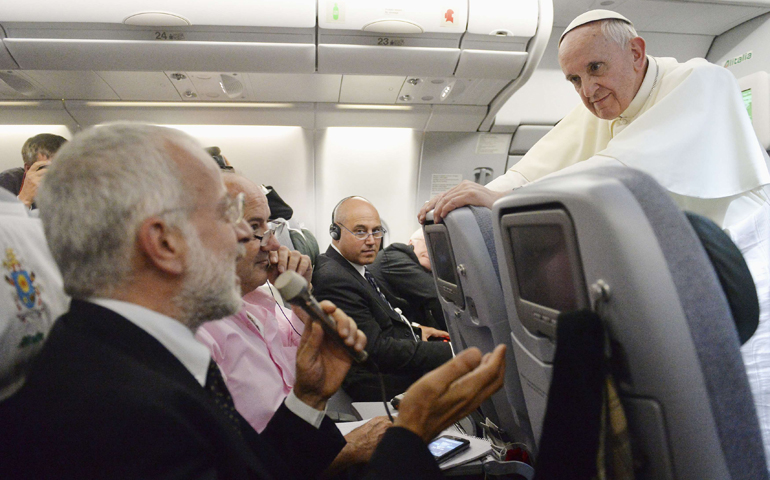 Pope Francis listens to a question from a journalist on his Monday flight back to Rome. The pope answered questions from 21 journalists over a period of 80 minutes on his return from Brazil. (CNS/pool via Reuters)

One way to tell that a pope is feeling good at the end of a long trip is when he comes back to the press compartment and does precisely what he said at the beginning of the journey he won't, or can't, do.

On the way to Rio de Janeiro on July 22, Pope Francis told reporters, "I don't give interviews." But at the end of his seven-day tour de force in Brazil, not only did the pope give an interview, he gave a whopper of one.

He took questions from reporters traveling aboard the papal plane for a full hour and 21 minutes with no filters or limits and nothing off the record. Francis stood for the entire time, answering without notes and never refusing to take a question. The final query was an especially delicate one about charges of homosexual conduct against his recently appointed delegate to reform the Vatican bank, and not only did Francis answer, but he actually thanked reporters for the question.

On background, officials said the decision to hold the news conference aboard the 12-hour flight from Rio de Janeiro to Rome was a personal decision by Francis and that aides at one point had counseled him against it.

Not since John Paul II, prior to the debilitating effects of his illness, has a pope engaged in such a free-wheeling and spontaneous exchange with the press. Francis spoke in Italian and Spanish, the languages in which his comfort level is the greatest.

Among other points, Pope Francis:

The following are highlights of that Q&A with the pope; a full transcript has been promised soon.

"I don't know yet how to fix the IOR [Institute for the Works of Religion, better known as the Vatican bank] ... some say it should be a sort of ethical bank, others that it should be an assistance fund, others want to close it altogether. I've heard all these voices, but I don't know. I will trust the work of the persons working on it, of the commission. [Note: Francis has established a five-member commission to investigate the Vatican bank.] ... What's important is transparency and honesty. It must be like this."

"The climate [in Rio de Janeiro] was spontaneous ... I could be close to the people, greet them, embrace them, without armored cars. During the entire time, there wasn't a single incident. I realize there's always a risk of a crazy person, but having a bishop behind bulletproof glass is crazy, too. Between the two, I prefer the first kind of craziness."

"Everyone has to live in their own way. The cardinals in the Curia, at least the ones I know, don't live like wealthy people. They have fairly modest apartments. But in a general sense, austerity is necessarily for all those who work in the service of the church."

"There are saints in the Roman Curia, among the cardinals, priests, religious, sisters and laity. They work hard, and also do things that are often hidden. I know some who concern themselves with feeding the poor or who give up their free time to work in a parish. As always, the ones who aren't saints make the most noise ... a single tree falling makes a sound, but a whole forest growing doesn't."

"If there's resistance [in the Vatican], I haven't seen it. It's true that I haven't done a lot yet, but so far I've found helpful, loyal people. I like it when someone says, 'I don't agree with you,' and I have found that. People will say, 'I'll say what I think, but you do what you want.' I've found that attitude in the Curia. That's better than those who say, 'That's great, that's great,' but then say the opposite later ... maybe people like that are there, but I haven't run into significant resistance."

"I can tell you that I'm going to Cagliari on Sept. 22, and to Assisi on Oct. 4. I'd like to be able to join Patriarch Bartholomew I [of Constantinople] in Jerusalem, who has invited me for the 50th anniversary of Paul VI [referring to a historic meeting between Pope Paul and the Patriarch of Constantinople in 1964].' The Israeli government has also invited me, and I believe the Palestinian Authorities has done the same. We're thinking about it, but I'm not sure yet. I think a trip to Asia can be done, especially because it's a continent Benedict XVI did not get to, though he wanted to ... maybe Sri Lanka, maybe the Philippines, I'm not sure."

"I wanted to go to Constantinople for the feast of St. Andrew, but it wasn't possible."

"We talked about the statistics regarding Pentecostals with the bishops on Brazil in a meeting yesterday. I'll tell you something about the Charismatic Movement ... at the end of the '70s and in the '80s, I wasn't a big fan. I used to say they confused the holy liturgy with a school of samba. I was converted when I got to know them better and saw the good they do. In this moment of the life of the church, the movements are necessary. They're a grace of the Spirit, and in general, they do much good for the church. The charismatic renewal movement isn't just about winning back a few Pentecostals, but it serves the church and its renewal."

Women in the church

"A church without women would be like the apostolic college without Mary. The Madonna is more important than the apostles, and the church herself is feminine, the spouse of Christ and a mother."

"On the ordination of women, the church has spoken and said no. John Paul II, in a definitive formulation, said that door is closed."

"I love Benedict XVI. He's a humble man of God and a man of prayer. When he resigned, it was a great example ... some say to me, how is it possible to have two popes in the Vatican? I heard a beautiful phrase that it's like having your grandpa at home, someone who's wise, venerated, loved and listened to. If I have a problem, something I don't understand, I can ask. On the Vatican leaks scandal, for example, he explained everything with simplicity and a spirit of service."

"This theme always comes up ... I believe this is a time of mercy, a change of epoch. It's a kairos moment for mercy ... In terms of Communion for those who have divorced and remarried, it has to be seen within the larger pastoral context of marriage. When the council of eight cardinals meets Oct. 1-3, one of the things they'll consider is how to move forward with the pastoral care of marriage. Also, just 15 days ago or so, I met the secretary of the Synod of Bishops, and maybe it will also focus on the pastoral care of marriage. It's complicated."

"John XXIII was the figure of a county priest who loves all of his faithful and knows how to take care of them. He was a great bishop, and also a great nuncio. When he was in Turkey, he was responsible for so many false baptisms in order to save Jews ... he was courageous. He had a great sense of humor and a great holiness. Some in the Vatican didn't like him, and when he would come in they would make him wait, but he would always pray his rosary or read his breviary. He truly cared about the poor ... once when Casaroli [the cardinal Secretary of State] returned from a mission in Eastern Europe, he reported to the pope, who asked him if he was still working with school kids. When he said yes, John XXIII told him never to abandon them. He called the council, and was extremely docile to the call of God."

"John Paul II was a great missionary of the church. He carried the Gospel everywhere. ... How many trips did he make? He felt the need to carry the words of the Lord, like St. Paul. He was great. Putting both together is a message to the church, that both were extremely good. Causes for both Paul VI and for Papa Luciani [John Paul I] are also underway."

"Dec. 8 had been talked about as the date [for the canonizations], but the problem is all the people who will want to come from Poland, not all of whom can fly. Many will take buses, and by December the roads are iced. We have to rethink the date. I've talked about it to Cardinal [Stanislaw] Dziwisz [of Krakow, Poland], who gave me a couple of possibilities. One is the feast of Christ the King this year [late November], and the other is the feast of Divine Mercy next year [shortly after Easter]. I have to talk to Cardinal [Angelo] Amato [prefect of the Congregation for the Causes of Saints] about it."

"I did what canon law requires, which is to conduct a preliminary investigation. We didn't find anything to confirm the things he was accused of, there was nothing. ... I'd like to add that many times we seem to seek out the sins of somebody's youth and publish them. We're not talking about crimes, which are something else. The abuse of minors, for instance, is a crime. But one can sin and then convert, and the Lord both forgives and forgets. We don't have the right to refuse to forget ... it's dangerous. The theology of sin is important. St. Peter committed one of the greatest sins, denying Christ, and yet they made him pope. Think about that."

"There's a lot of talk about the gay lobby, but I've never seen it on the Vatican ID card."

"When I meet a gay person, I have to distinguish between their being gay and being part of a lobby. If they accept the Lord and have goodwill, who am I to judge them? They shouldn't be marginalized. The tendency [to homosexuality] is not the problem ... they're our brothers."