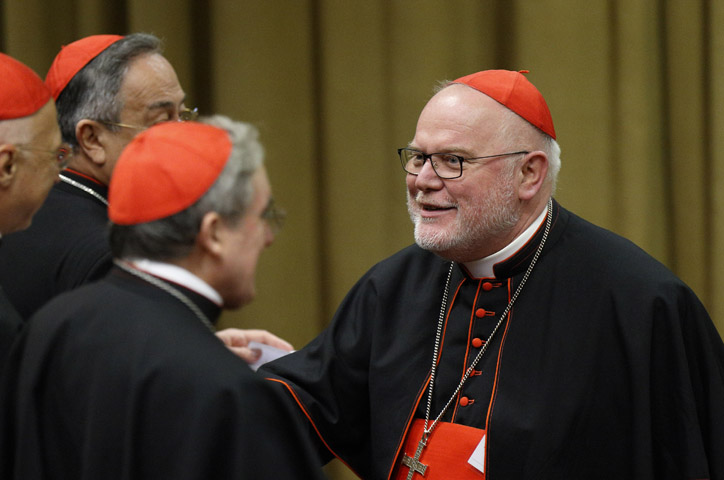 Cardinal Reinhard Marx of Munich-Freising, president of the German bishops' conference, arrives for a session of the Synod of Bishops on the family at the Vatican Oct. 23. (CNS/Paul Haring)

The pope's concept of a synodal church, which Francis outlined in his address on the 50th anniversary of the founding of the Synod of Bishops on Oct. 17, must be put into practice, Cardinal Reinhard Marx of Munich, the president of the German bishops' conference, has emphasized.

"In this striking address in the middle of the synod, Pope Francis made it quite clear that the church's future path could only be one of synodal cooperation," Marx said at a study day on "Salutary Decentralization -- What local structures does a missionary church need?" at St. Georgen Jesuit College at Frankfurt.

"A synodal church is a church which takes all levels -- the pope, the bishops and the faithful -- into account," Marx, who is also a member of the Council of Cardinals, explained.

There had always been "that search for more" in the history of evangelization, "that wish to reach more people and to missionize more countries," Marx said. "But that 'more' is not enough. Evangelization must go deeper."

In the light of Francis' apostolic exhortation Evangelii Gaudium, the church was open for change.

"The church's outer form can be changed," Marx said. "For some people that sounds ominous but I don't feel in any way threatened by that. Change can be very beneficial without traditions having to be given up. We were very much aware of such debates at the recent synod."

"We should remember that," he emphasized.

In the synodal church that Francis desired, such a network of local churches cooperating with the universal church was realized, Marx said. The selection and further education of bishops -- but also controlling bishops -- was of the utmost significance in this future church. Incorporating modern findings on good management and leadership would be essential.

"But one thing will be absolutely indispensable -- the future church can only be a church which combines unity and diversity on all levels," he said.