Pope on Syria: Violence not the path to peace 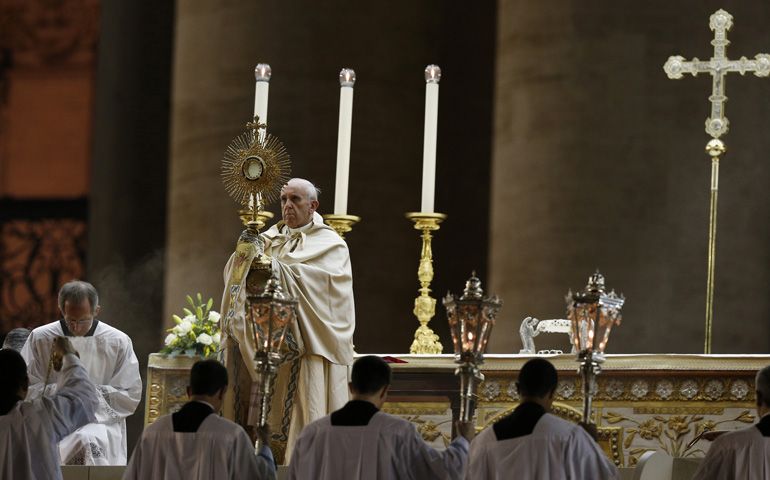 Pope Francis leads a blessing during a vigil to pray for peace Saturday in Syria in St. Peter's Square at the Vatican. (CNS/Paul Haring)

Before a crowd in St. Peter's Square estimated at 100,000 gathered to pray for peace in Syria, Pope Francis on Saturday forcefully declared that "violence and war are never the way to peace!"

Francis called for this special day of prayer and fasting as part of a full-court Vatican press against a military intervention in Syria, at the same moment that the United States and other Western nations are debating the idea of launching strikes in retaliation for the alleged use of chemical weapons by the regime of Syrian President Bashar Assad.

In addition to Saturday's four-hour service, presided over by Francis, the Vatican also held a special briefing Thursday for all ambassadors accredited to the Holy See to lay out the case against the use of force, a rare move that reflects the seriousness the Vatican attaches to the Syrian conflict. Francis has also repeatedly weighed in against a new round of violence in Syria, even using his Twitter feed to press the case.

Francis also wrote to Russian President Vladimir Putin ahead of the G-20 summit in St. Petersburg, Russia, to insist that an attempted military solution to the Syrian conflict would be "futile."

The Vatican has both a humanitarian agenda in Syria, worrying that a Western offensive could lead to a wider regional conflict and inflame Muslim extremism, and a pastoral concern that Syria's Christian minority could become the primary victims of whatever might follow regime change in Syria, similar to what happened after the fall of Saddam Hussein in Iraq. Estimated at 10 percent of Syria's population of 22.5 million, Christians already suffer from a rising tide of antagonism and violence, and the country's Christian leadership has been outspoken in its opposition to Western intervention.

On Saturday, Francis framed the case against expanding violence in Syria in broad spiritual and moral terms.

"How many conflicts, how many wars have marked our history," Francis said.

"Even today we continue this history of conflict between brothers, even today we raise our hands against our brother. Even today, we let ourselves be guided by idols, by selfishness, by our own interests, and this attitude persists."

The pope argued that the Cross of Christ is the ultimate refutation of violence as a solution to humanity's problems.

Francis argued that peace "is possible for everyone," evoking applause from the crowd.

The only specific mention of Syria came at the end of Francis' remarks.

"Forgiveness, dialogue, reconciliation -- these are the words of peace, in beloved Syria, in the Middle East, in all the world!" he said.

Saturday's prayer service in St. Peter's Square began with a procession featuring the Blessed Virgin Mary under the title of "Salus Populi Romani", the "protector of the Roman people." After the recitation of the rosary, interspersed with readings from St. Therese of Lisieux, the pope delivered his remarks.

The service was to conclude with a eucharistic blessing from Pope Francis.

Among those on hand in St. Peter's Square on Saturday evening was a delegation from the "Community of the Arab World in Italy" guided by the group's president, Foad Aodi.

"For us, Pope Francis is an idol. We wish there was a leader like him also for the Islamic world," Aodi said, who added that his organization is preparing a Muslim day of prayer "to confirm our support for Francis' appeal and to say 'yes' to peace in the Middle East and 'no' to war."

Ambassadors from various nations were also present, though relatively few from major Western powers such as France or Great Britain. (The new U.S. ambassador to the Holy See, Ken Hackett, has not yet arrived in Rome.)

Saturday's service, however, was not an official event in which the presence of the diplomatic corps would be expected. During Thursday's briefing, ambassadors were told by the Vatican's Secretary of State that if they wanted to attend, they would be welcome, but there was no obligation.

In Washington, Cardinal Donald Wuerl celebrated a Mass for Justice and Peace on Saturday in conjunction with the vigil led by Pope Francis in Rome. The pope's ambassador in the United States and other church dignitaries were on hand.

"We knock at the doors of human hearts all over the world," Wuerl said, "but particularly in Syria and the Middle East, asking that God open them with the power of his love so that those hearts might be changed."

The Mass builds on a a significant press from the U.S. bishops' conference against military intervention in Syria, including a letter to President Barack Obama on Sept. 4 from both Cardinal Timothy Dolan of New York, president of the conference, and Bishop Richard Pates of Des Moines, Iowa, chair of the Committee on International Justice and Peace, as well as a Sept. 5 letter to all members of Congress and an "action alert" issued to all American dioceses.

Estimates from church observers are that at least 120 dioceses in the United States organized an opportunity for prayer for peace today in keeping with the pope's request.

Pope on Syria: Violence not the path to peace