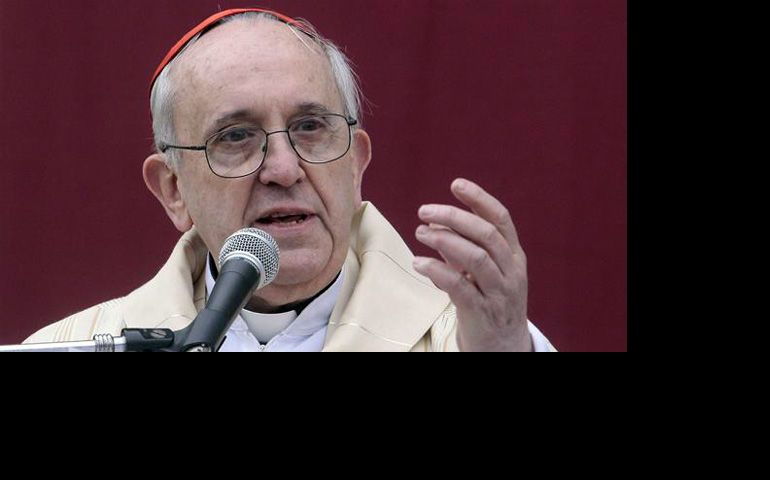 Rome — In the days leading up to the conclave, John Allen offered a profile each day of one of the most frequently touted papabili, or men who could be pope. On March 3, he profiled Cardinal Jorge Mario Bergoglio, who was elected March 13 to be Pope Francis. Here is the profile Allen wrote:

While there are still no tracking polls to establish who's got legs as a papal candidate, the 2013 conclave at least has one objective measure not available in 2005: past performance. Many of the cardinals seen as candidates now were also on offer the last time around, and someone who had traction eight years ago could be a contender again.

After the dust settled from the election of Benedict XVI, various reports identified the Argentine Jesuit as the main challenger to then-Cardinal Joseph Ratzinger. One cardinal later said the conclave had been "something of a horse race" between Ratzinger and Bergoglio, and an anonymous conclave diary splashed across the Italian media in September 2005 claimed that Bergoglio received 40 votes on the third ballot, just before Ratzinger crossed the two-thirds threshold and became pope.

Though it's hard to say how seriously one should take the specifics, the general consensus is that Bergoglio was indeed the "runner-up" last time around. He appealed to conservatives in the College of Cardinals as a man who had held the line against liberalizing currents among the Jesuits, and to moderates as a symbol of the church's commitment to the developing world.

Back in 2005, Bergoglio drew high marks as an accomplished intellectual, having studied theology in Germany. His leading role during the Argentine economic crisis burnished his reputation as a voice of conscience, and made him a potent symbol of the costs globalization can impose on the world's poor.

Bergoglio's reputation for personal simplicity also exercised an undeniable appeal – a Prince of the Church who chose to live in a simple apartment rather than the archbishop's palace, who gave up his chauffeured limousine in favor of taking the bus to work, and who cooked his own meals.

Another measure of Bergoglio's seriousness as a candidate was the negative campaigning that swirled around him eight years ago.

Three days before the 2005 conclave, a human rights lawyer in Argentina filed a complaint charging Bergoglio with complicity in the 1976 kidnapping of two liberal Jesuit priests under the country's military regime, a charge Bergoglio flatly denied. There was also an e-mail campaign, claiming to originate with fellow Jesuits who knew Bergoglio when he was the provincial of the order in Argentina, asserting that "he never smiled."

All of that by way of saying, Bergoglio was definitely on the radar screen. Of course he's eight years older now, and at 76 is probably outside the age window many cardinals would see as ideal. Further, the fact he couldn't get over the hump last time may convince some cardinals there's no point going back to the well.

That said, many of the reasons that led members of the college to take him seriously eight years ago are still in place.

Born in Buenos Aires in 1936, Bergoglio's father was an Italian immigrant and railway worker from the region around Turin, and he has four brothers and sisters. His original plan was to be a chemist, but in 1958 he instead entered the Society of Jesus and began studies for the priesthood. He spent much of his early career teaching literature, psychology and philosophy, and early on he was seen as a rising star. From 1973 to 1979 he served as the Jesuit provincial in Argentina, then in 1980 became the rector of the seminary from which he had graduated.

These were the years of the military junta in Argentina, when many priests, including leading Jesuits, were gravitating towards the progressive liberation theology movement. As the Jesuit provincial, Bergoglio insisted on a more traditional reading of Ignatian spirituality, mandating that Jesuits continue to staff parishes and act as chaplains rather than moving into "base communities" and political activism.

Although Jesuits generally are discouraged from receiving ecclesiastical honors and advancement, especially outside mission countries, Bergoglio was named auxiliary bishop of Buenos Aires in 1992 and then succeeded the ailing Cardinal Antonio Quarracino in 1998. John Paul II made Bergoglio a cardinal in 2001, assigning him the Roman church named after the legendary Jesuit St. Robert Bellarmino.

Over the years, Bergoglio became close to the Comunione e Liberazione movement founded by Italian Fr. Luigi Giussani, sometimes speaking at its massive annual gathering in Rimini, Italy. He's also presented Giussani's books at literary fairs in Argentina. This occasionally generated consternation within the Jesuits, since the ciellini once upon a time were seen as the main opposition to Bergoglio's fellow Jesuit in Milan, Cardinal Carlo Maria Martini.

On the other hand, that's also part of Bergoglio's appeal, someone who personally straddles the divide between the Jesuits and the ciellini, and more broadly, between liberals and conservatives in the church.

Bergoglio has supported the social justice ethos of Latin American Catholicism, including a robust defense of the poor.

"We live in the most unequal part of the world, which has grown the most yet reduced misery the least," Bergoglio said during a gathering of Latin American bishops in 2007. "The unjust distribution of goods persists, creating a situation of social sin that cries out to Heaven and limits the possibilities of a fuller life for so many of our brothers."

At the same time, he has generally tended to accent growth in personal holiness over efforts for structural reform.

Bergoglio is seen an unwaveringly orthodox on matters of sexual morality, staunchly opposing abortion, same-sex marriage, and contraception. In 2010 he asserted that gay adoption is a form of discrimination against children, earning a public rebuke from Argentina's President, Cristina Fernández de Kirchner.

Nevertheless, he has shown deep compassion for the victims of HIV-AIDS; in 2001, he visited a hospice to kiss and wash the feet of 12 AIDS patients.

Bergoglio also won high marks for his compassionate response to the 1994 bombing in Buenos Aires of a seven-story building housing the Argentine Jewish Mutual Association and the Delegation of the Argentine Jewish Association. It was one of the worst anti-Jewish attacks ever in Latin America, and in 2005 Rabbi Joseph Ehrenkranz of the Center for Christian-Jewish Understanding at Sacred Heart University in Fairfield, Connecticut, praised Bergoglio's leadership.

"He was very concerned with what happened, Ehrenkranz said. "He's got experience."

Nevertheless, after the conclave of 2005 some cardinals candidly admitted to doubts that Bergoglio really had the steel and "fire in the belly" needed to lead the universal church. Moreover, for most of the non-Latin Americans, Bergoglio was an unknown quantity. A handful remembered his leadership in the 2001 Synod of Bishops, when Bergoglio replaced Cardinal Edward Egan of New York as the relator, or chairman, of the meeting after Egan went home to help New Yorkers cope with the 9/11 terrorist attacks. In that setting, Bergoglio left a basically positive but indistinct impression.

Bergoglio may be basically conservative on many issues, but he's no defender of clerical privilege, or insensitive to pastoral realities. In September 2012, he delivered a blistering attack on priests who refuse to baptize children born out of wedlock, calling it a form of "rigorous and hypocritical neo-clericalism."

The case for Bergoglio in 2013 rests on four points.

First and most basically, he had strong support last time around, and some cardinals may think that they're getting another bite at the apple now.

Second, Bergoglio is a candidates who brings together the first world and the developing world in his own person. He's a Latin American with Italian roots, who studied in Germany. As a Jesuit he's a member of a truly international religious community, and his ties to Comunione e Liberazione make him part of another global network.

Third, Bergoglio still has appeal across the usual divides in the church, drawing respect from both conservatives and moderates for his keen pastoral sense, his intelligence, and his personal modesty. He's also seen as a genuinely spiritual soul, and a man of deep prayer.

"Only someone who has encountered mercy, who has been caressed by the tenderness of mercy, is happy and comfortable with the Lord," Bergoglio said in 2001. "I beg the theologians who are present not to turn me in to the Sant'Uffizio or the Inquisition; however, forcing things a bit, I dare to say that the privileged locus of the encounter is the caress of the mercy of Jesus Christ on my sin."

On the other hand, there are compelling reasons to believe that Bergoglio's window of opportunity to be pope has already closed.

First, he's eight years older than in 2005, and at 76 he would only be two years younger than Benedict XVI was when he became pope. Especially on the heels of a papal resignation on the basis of age and exhaustion, many cardinals may balk at electing someone that old, fearing it would set the church up for another shock to the system.

Second, although Bergoglio was a serious contender in 2005, he couldn't attract sufficient support to get past the two-thirds threshold needed to be elected pope. Especially for the 50 cardinals who were inside the conclave eight years ago, they may be skeptical that the results would be any different this time around.

Third, the doubts that circulated about Bergoglio's toughness eight years ago may arguably be even more damaging now, given that the ability to govern. and to take control of the Vatican bureaucracy, seems to figure even more prominently on many cardinals' wish lists this time. Although Bergoglio is a member of several Vatican departments, including the Congregations for Divine Worship and for Clergy, he's never actually worked inside the Vatican, and there may be concerns about his capacity to take the place in hand.

Fourth, there's the standard ambivalence about Jesuits in high office, both from within the order and among some on the outside. That may have been a factor in slowing Bergoglio's progress last time, and nothing has changed the calculus in the time since.

Whether Bergoglio catches fire again as a candidate remains to be seen; one Italian writer quoted an anonymous cardinal on March 2 as saying, "Four years of Bergoglio would be enough to change things." Given his profile, however, Bergoglio seems destined to plan an important role in this conclave – if not as king, then as a kingmaker.

On this day: Judas

Aid to Middle East refugees can not be exclusive to Christians, say U.S. bishops

On this day: The Assumption