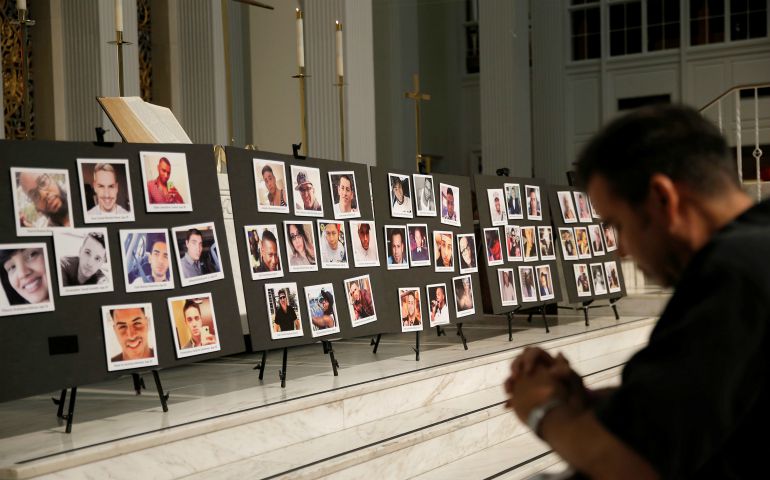 A man prays June 15, 2016, in front of photographs of victims of the mass shooting at the Pulse nightclub in Orlando, Florida, during a vigil at a church in Orlando. (CNS photo/Jim Young, Reuters)

When Omar Mateen killed 49 people and wounded 48 others inside a prominent gay night club in Orlando, Florida, a year ago this week, the city's Catholic bishop, John G. Noonan, denounced what he called a "massive assault on the dignity of human life." The U.S. Conference of Catholic Bishops lamented the "unspeakable violence." The Vatican's press office released a statement decrying "such terrible and absurd violence." Among these sincere expressions of grief, not one recognized the fact that this assault on human dignity and this horrific crime had targeted gay people specifically.

Even as nearly every bishop in the country missed an obvious opportunity to express solidarity with LGBT people in the wake of the Pulse nightclub shooting, those in the church hierarchy who did respond clearly — including Chicago's Cardinal Blase Cupich — offer cautious hope that the nation's most influential church can chart a better path forward when it comes to affirming the human rights of LGBT people.

The first step in what will be a slow healing process is for Catholic leaders to acknowledge the church plays a role in wounding LGBT people by using dehumanizing language.

While the Catechism of the Catholic Church rejects violence and "unjust discrimination" against LGBT people, it also calls homosexuality an "inclination" that is "objectively disordered." Before he was elected Pope Benedict XVI, Cardinal Joseph Ratzinger led the Vatican's chief doctrine office for more than two decades. In a 1986 "Letter to the Bishops of the Catholic Church on the Pastoral Care of Homosexual Persons," Ratzinger described homosexuality as a "tendency toward an intrinsic moral evil." Seventeen years later, he wrote that growing recognition of same-sex civil unions legitimized the "approval of deviant behavior." Bishop Thomas Paprocki of Springfield, Illinois, even celebrated a public exorcism in 2013 to protest the Catholic governor's signing a same-sex marriage law. The bishop presided over what was formally called "Prayers in Supplication and Exorcism in Reparation for the Sin of Same-Sex Marriage." When a church leader literally demonizes LGBT people and their commitment, those called to be stewards of a Gospel rooted in the love of Christ send a toxic message about the unworthiness of them.

Dehumanizing language has consequences. "It doesn't reflect that our experiences as gay and lesbian persons are a gift, something that brings us closer to other people and to God," said Francis DeBernardo, executive director of New Ways Ministry, an organization that works to build bridges between LGBT Catholics and the church. "People are alienated by this language and feel rejected. It ends conversations rather than begins conversations." San Diego Bishop Robert McElroy, who has played a key role in encouraging the U.S. hierarchy to adopt Pope Francis' more inclusive attitude, has suggested the church needs to rethink language such as "intrinsically disordered." In an interview with America, a Jesuit magazine, he called that terminology "very destructive language that I think we should not use pastorally." He explained that "in Catholic moral theology it is a philosophical term that is automatically misunderstood in our society as a psychological judgment."

Pope Francis, while strongly opposing same-sex marriage and rejecting modern interpretations of gender identity, understands that language and gestures matter. The first Jesuit pope has pushed the church to recognize the perils of a narrow, legalistic interpretation of church doctrine. He wants Catholic bishops and priests to accompany people, including LGBT people, through the messiness and complexity of life. The church's teachings, he describes in a memorable phrase, can't be understood as "stones to throw at people's lives." Francis has met with a transgender man, and during his trip to the United States he held a private meeting with a longtime friend from Argentina who has been in a same-sex relationship for two decades.

For a pope, the way that Francis speaks about gays and lesbians is nothing short of revolutionary. "A person once asked me, in a provocative manner, if I approved of homosexuality," the pope said in a 2013 interview. "I replied with another question: 'Tell me: when God looks at a gay person, does he endorse the existence of this person with love, or reject and condemn this person? We must always consider the person." When asked by reporters about gay priests at the Vatican, his now iconic quote flew around the globe in minutes. "If someone is gay and he searches for the Lord, who am I to judge?" Last summer, Francis even said that gays and lesbians deserve an apology from the church, a first for a pope. The prominent author and Jesuit Fr. James Martin hailed it as a "groundbreaking moment."

Some U.S. bishops are taking their cues from the top. "In a church that has not always valued or welcomed your presence, we need to hear your voices and take seriously your experiences," Bishop John Stowe of Lexington, Kentucky, told several hundred participants at a meeting of LGBT Catholics in April. Cardinal Joe Tobin, appointed by Francis to lead the Newark archdiocese last November, recently welcomed a pilgrimage of LGBT Catholics to the Cathedral Basilica of the Sacred Heart. "I am delighted that you and the LGBTQ brothers and sisters plan to visit our beautiful cathedral," Tobin wrote in an email to the group's leader. "You will be very welcome." Archbishop Cupich, appointed by the pope to lead the nation's third largest diocese, reacted to the U.S. Supreme Court's decision to legalize same-sex marriage with a call for "real, not rhetorical" respect for gays and lesbians. "The rapid social changes signaled by the Court ruling," he wrote, "call us to mature and serene reflections as we move forward together."

But these expressions are the exception, and not the rule. Over the past decade, at least 50 LGBT Catholics have been fired or forced to resign positions in Catholic schools after public disclosures of same-sex relationships. Students and families rally behind these teachers and administrators, who are often beloved leaders and role models with years of experience. While in most cases the school has a legal right to act, the firings leave Catholic institutions that want to teach students about mercy and justice looking blithely indifferent to those values. Contracts or "loyalty oaths" that some Catholic teachers are required to sign are often hyper-focused on sexuality. This disproportionate focus on sex and sexuality as the defining marker of Catholic identity is problematic. It eclipses the church's expansive social justice teachings that are rooted in the Gospel's focus on people who are poor, excluded and marginalized by the powerful. Margie Winters, a religious education teacher at Waldron Mercy Academy in Philadelphia, was fired in 2015 after a disgruntled parent outed her marriage to another woman. "Most of my professional life has been dedicated to the church," Winters said. "The experience was like a death. There is a sense of exile. These firings tear apart communities that are filled with faithful people. The church is sending a contradictory message. We're told we are made in the image and likeness of God, but these kind of firings say that isn't true."

According to research, a majority of Catholics support same-sex marriage. Many church leaders usually interpret this evidence to assume there has simply been a failure to effectively teach and reach the faithful. Doubling down with the same message, however, has cost the church. Research shows that the growing number of Americans — especially Millennials in their 20s and early 30s — who no longer identify with any religion are especially turned off by what they consider to be unjust positions toward LGBT people. Those raised Catholic, according to data from Public Religion Research Institute, are more likely than those raised in any other religion to cite negative religious treatment of gay and lesbian people as one of the primary reasons they left the church. Rachel Nagengast, 25, went to Catholic schools from grade school through Boston College*, where last year she earned a master's degree in theological studies. But as a self-described queer woman, Nagengast increasingly felt alienated by her church's teachings on homosexuality. She hasn't gone to a Catholic Mass in years. "I feel like an outsider in what should be home," she said. "LGBT Catholics are expected to be patient, but I was really tired of being satisfied with baby steps or being expected to applaud even the tiniest effort."

If they want to retain the next generation of Catholics — including LGBT people and their allies — Catholic leaders should listen more closely and learn from the experiences of gay and transgender people. When more than 100 bishops and other Catholic leaders met in February for a conference organized by the National Catholic Bioethics Center, one of the top items on the agenda focused on how increased calls for transgender rights will impact Catholic hospitals, schools and parishes. John Haas, the center's director, told a reporter that bishops are looking for ways to "accompany these people, help them, be with them, be close with them." And yet not a single transgender person was invited or asked to speak at the conference. Church leaders can't stand with LGBT people without taking the time to listen to them. Bishops could take a simple but powerful step by setting up forums to meet with and learn from LGBT Catholics. Vatican officials also need to take seriously the need to update and humanize language in church documents that don't reflect the fullness of LGBT people's lives. While making official revisions to the catechism is a complicated and lengthy process, bishops communicate through pastoral letters, op-eds and increasingly through social media. These opportunities present a chance to ditch language that casts LGBT people to the peripheries and bring them to the center of authentic conservations.

If Catholic bishops really want a church that listens, heals and goes to the margins as Pope Francis does, it's far past time to build a culture of encounter with the LGBT community. I recently met a Catholic deacon from St. Petersburg, Florida, who had a wake-up call after his son transitioned to a transgender woman. "I was blissfully ignorant of all things LGBT until it came to my family," Ray Dever told participants at a conference, "LGBT Catholics in the Age of Pope Francis." The Catholic father and others like him have a lot to teach bishops and priests who have rarely if ever sat down with a gay or transgender person. "There are so many families who reject their LGBT kids and that's tragic, especially when that is done in the name of faith," Dever said. "I'm no expert, but what these families need to hear is God created these kids just the way they are and that God loves them."