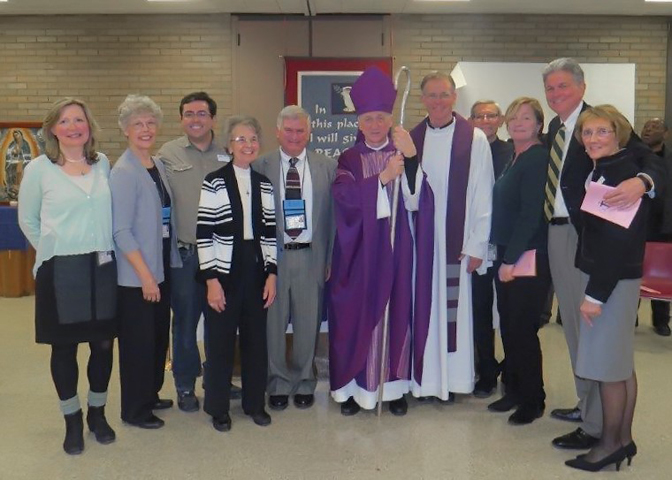 "It is believed," Archbishop Blase Cupich of Chicago told five youth at the Cook County Juvenile Detention Center, "that wherever the bishop is, there is the church. 2.2 million Catholics are with you at this moment; tonight we are the Catholic Church of Chicago."

On a Saturday evening in March 2015, Cupich had come to the detention center to celebrate the confirmation of five young men, all 16 or 17 years old. Jovany, Joshua, Marvin, Pedro, and Joseph were being tried as adults. Amidst the strain and stress of the possibility of spending many years in prison, they wanted and worked hard to better understand their Catholic faith. Through the guidance and teaching of Mike Donovan, one of the volunteers with Kolbe House and Precious Blood Ministry of Reconciliation, they were confirmed by the archbishop. As one of the kids said, "Pretty cool, huh?"

Cupich's presence and his pastoral and open attitude won the hearts of everyone. He greeted the sheriffs as he came into the facility, stopping to speak with each one. Upstairs in the visitation area, he spoke to the families who were waiting there to visit their children. Making his way through the facility and into the chapel area, even before he took off his coat, he immediately went over and introduced himself to the youth and their families, who were grateful and overwhelmed that the church had not forgotten them. His presence and attitude demonstrated that this was not about the archbishop; this was about youth who, though locked up, were part of the Catholic family.

In his homily, he explained the sacrament confirmation. He told the five young men that he was going to mark their foreheads with the sign of the cross using the holy chrism oil, which signifies the presence of Christ. He told them that the cross that he placed on their forehead wasn't just the cross of Christ, but it was also their cross. It was the pain and hurt that they carried. He said the holy chrism is used because Christ meets us precisely in those moments of pain and disappointment.

Cupich spoke of the Samaritan woman at the well (John 4:4-16), which was the gospel of the day. He said that, while most people came to the well early in the morning when it was cool, she had to come out in the heat of the day because she was not accepted by others. She couldn't join the other women as they came to the well because of how she was looked upon. "She believed what they said about her," he said. "She believed deep in her heart that she was not worthy, that her sin had made her a bad person -- worthless." He went on to tell the young men, who were dressed in their jail garb, that neither should they believe the hurtful or harmful things that people might say of them, that they should not believe that they are bad people.

"God the Father and Son comes to you in the Holy Spirit because of his love for you. Believe it," he said. "This sacrament is a gift because it relieves you of the burdens you carry and calls you a 'son of God.' You receive, in this sacrament, a love that no one can take from you."

Tears flowed from mothers and family members as they heard their children being called good, something they hadn't heard for a long time. As much as this sacrament and the archbishop's visit meant to the kids, I think it meant even more to the families gathered there. They needed to hear that they were still a part of the Catholic family.

It is said that the worst form of torture is isolation. Isolation is the feeling that no matter how loud you cry out, no one hears you, that you are invisible to the world. The visit by the archbishop broke through that isolation and darkness and, if what the he said is true, for that brief time the whole Catholic church of Chicago was celebrating as the Holy Spirit dispelled the overwhelming darkness and ignited the light within these five young men and their families. And, as we know, that fire will never be extinguished.

On March 7, 2015, in the once dark detention center, a light broke through the darkness and as Cupich said, "I needed this, we as church needed this, and none of us will be the same."

He added that this is where the church needs to be -- with the forgotten, the thirsty, the hurting, our children.

After the celebration, Cupich took pictures with the youth and their families -- and the many staff who wanted to have their picture taken with him as well. He stayed long after and shared a meal with the kids, their families, staff and volunteers. He remarked to one of the youth that he was really looking forward to being here with them and how he wanted to do a good job. He quipped, "You know jobs are hard to come by these days; I don't want to lose mine!"