Religion: A problem or a solution? 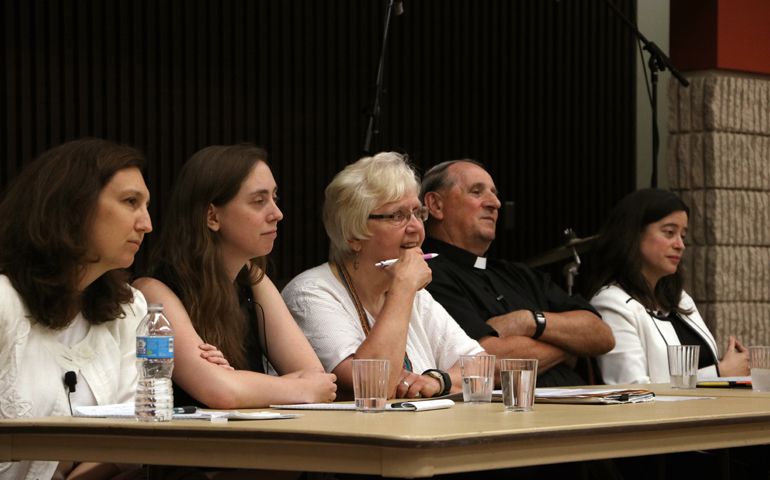 Rev. Alison Miller summed up in one story how religion can be both a "problem" and a "solution." Her mother and father were Christian and Jewish, respectively, and when they wanted to marry, many decades ago, they could find neither a rabbi nor a minister who would marry them. The only person who would do it was a Unitarian Universalist minister. So Allison embraced the "solution" in her own life and became a Unitarian minister herself.

I'm sure there are Catholics who could tell similar stories. When I was young, Catholic officials showed their displeasure with interfaith marriages by holding them -- not in the church -- but in the rectory.

In any event, Alison Miller told that story as part of an interfaith panel at George Mason University on Fri., June 3, discussing whether religion is a "problem" or a "solution" in individual lives, or in the world at large, these days. She was joined by Rev. Gerry Creedon, a Catholic pastor in the Arlington diocese, Emma Green, a writer for The Atlantic who claims the Jewish tradition, and Dr. Maria Dakake, an associate professor of Islamic thought and Quranic Studies at George Mason University. An audience of approximately 60-75 people participated.

Each panelist shared personal stories about faith and how they got to where they are. Gerry Creedon was born in Ireland, but he assured us that becoming a serious Catholic was not "a given," even with his ethnic heritage. He gave careful thought to answering his call to priesthood. Maria Dakake is a convert to Islam, and she related the thoughtful story of her conversion from Christianity. Emma Green was born in a small town in central Tennessee where there were not many Jews, but she embraced her own tradition and covers religion (and other topics) for The Atlantic. Recently, she wrote a series of articles that deals with how young people these days choose -- or stay away from-- religion.

One of the most interesting moments came when an older man walked to the microphone and announced that it was time to do away with all religion. Yes, all religion. It was, he said, because religion "causes" war. "All wars have been caused by religion," he said.

When he finished, I stepped out of my role as moderator to comment. "We had a panel on religion and war on 'Interfaith Voices' several months ago," I interjected. "And all participants agreed that wars are caused by conflicts over power and money and resources. Religion is often wielded as a weapon of war, but it is rarely, if ever, a 'cause' of war." Heads nodded all around.

The Unitarian minister who set up this event, Rev. Scott Sammler-Michael, and those of us at "Interfaith Voices," plan more events like this when students return during the academic year. They should prove fascinating because the majority of the audience will be of traditional college-age people. To be continued ... in the fall.

Parish | Religion: A problem or a solution?