KANSAS CITY, Mo. -- The key theme of religious life in the 21st century is not diminishment but transformation, says Marist Br. Sean Sammon. 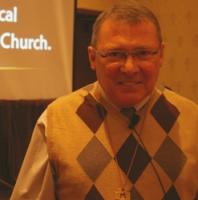 In face of reduced numbers of vowed members, and with many religious growing older, orders have a unique opportunity to reexamine their identities -- breathing new life into the charisms of their founders and challenging the church to stay true to the central precepts of the Gospel, Sammon, the former Superior General of the Marist Brothers, told a crowd assembled here this afternoon for the Religious Formation Conference's congress.

"The future of religious life is in our hands," Sammon told the crowd, which was composed mainly of leaders and formation directors of religious orders, gathered from across the country for the weekend conference. "Let us choose to renew ourselves, to reexamine the charisms of our orders, and to be nothing more and nothing less that the presence of the Holy Spirit."

Sammon's remarks came in a seminar session at the conference titled "Congregational life and mission: The challenge of communal discernment."

Sammon, a clinical psychologist who served as superior general for the Marists from 2001-2009, in his talk covered a wide history of religious life, focusing on how religious orders have faced difficult times before and have always remained the "watchmen" of the church -- asking for whom the church serves, and whether it is staying true to Christ's mission.

As part of his presentation, he said religious orders need leaders who are transformational -- who can focus on "inspiring levels of motivation" amongst members, and providing a "compelling vision that evokes an emotional as well as intellectual response" among the members of the order.

If orders undertake our age's challenge of transformation, Sammon said, they can "reclaim their founding charisms" and encourage personal and congregation conversions.

"Every age has its challenges," Sammon told the assembled crowd. "We need to rise to the challenges of today."

Over the weekend hundreds of members of different orders are gathering to discuss issues of formation. Other speakers this afternoon included Charity Sr. Paula Gonzalez, who spoke on "Living the vows prophetically in a cosmic context," and Mercy Sr. Mary Pat Garvin, whose presentation was titled "Prophetic religious life: 'Social Mystics' need apply." This morning, attendees heard from Dominican Sr. Barbara Reid on "Gleanings of hope from Biblical women prophets.

Keep following NCR for more updates from the conference.

More than 2600 activists arrested in US protests since Obama's election

Some words with the prefect for religious life