Religious liberty should unite us, not divide us 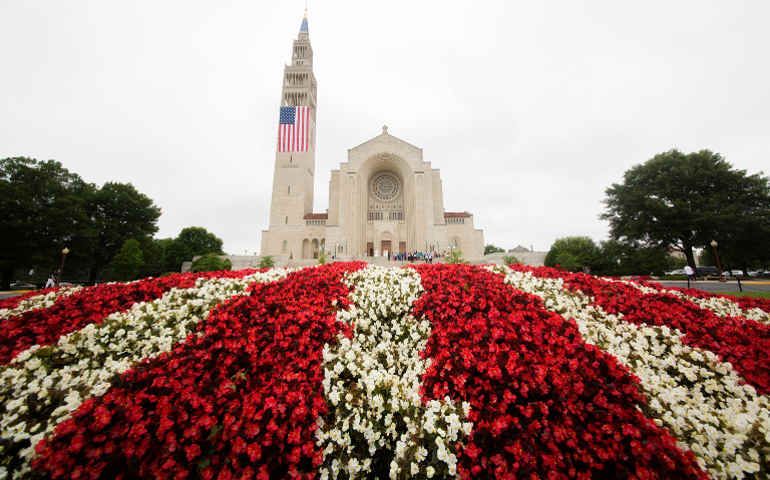 The Basilica of the National Shrine of the Immaculate Conception in Washington July 4, 2016. (CNS/Jaclyn Lippelmann)

A flurry of Supreme Court cases is putting religious liberty debates and state-church conflicts in the spotlight. In recent days, the court ruled that hospital systems with church affiliations are exempted from some provisions of federal pension law. The court also found that Trinity Lutheran Church in Missouri is eligible for a state grant to resurface its playground despite the state constitution’s ban on government funding of churches. In the fall, the justices will hear an appeal from a Colorado baker who violated a state anti-discrimination law for refusing to prepare a cake for a same-sex wedding. And the court will also make a final decision on President Trump’s ban on refugees traveling from some Muslim-majority countries.

Religious liberty is a foundational principle of a democratic society. Sadly, what could unite left and right is increasingly the latest battle in the culture wars. Finding a better path forward requires seeking common ground and rejecting false choices. We can affirm respect for religious conscience while also striving to protect the human rights of all people. Religious appeals were once used to justify slavery and baptize racial discrimination.

Some Christians today seek to deny gay, lesbian and transgender people basic rights in the name of religion. Discrimination under the guise of faith does a disservice to upholding authentic religious freedom. At the same time, some on the left who would reduce religious liberty to the sphere of private worship and limit the role of faith in the public square are also mistaken. Individual believers and religious institutions have served the common good and animated social justice movements since the founding of our nation. Liberal intolerance and animus toward the rights and responsibilities of faithful citizens and religious institutions are also an affront to democratic virtues and values.

Language and framing matters. Some Christians – including President Donald Trump – embrace an overheated rhetoric of persecution by claiming that people of faith are under attack. This siege mentality breeds a hunkered-down posture that does not reflect the liberating spirit of the gospel. It also does not reflect reality. Christians in the Middle East and other volatile areas are confronted with violent persecution. In contrast, the myriad legal and policy debates that arise in the United States over religious liberty questions concern the balancing of social goods in a pluralistic society. These challenges are significant and often complex, but they do not constitute an existential or apocalyptic threat to fundamental freedoms.

The U.S. Conference of Catholic Bishops is right to speak up in defense of religious liberty, but often inflames the debate. The conference’s annual “Fortnight for Freedom” campaign, which culminates on July 4, began in large part as a response to the Affordable Care Act’s contraception coverage requirements. While reasonable people — including religious liberty attorneys — disagree over whether exemptions provided to religious institutions are expansive enough, bishops framed the fight with breathless historical allusions. Less than a year before the 2012 presidential election, the Fortnight campaign kicked off when the liturgical calendar honored St. Thomas More and St. John Fischer, who suffered political persecution because of their faith and were executed by King Henry VIII. Evoking these Christian martyrs, the bishops argued that religious liberty was “under attack” and warned Catholics to be “on guard.” The diocese of Brooklyn, New York featured a front-page image of the Blessed Mother wrapped in the American flag.

Bishop Daniel Jenky of Peoria, Illinois, even made comparisons between President Barack Obama and some of the worse dictators of the 20th century. “Hitler and Stalin, at their better moments, would just barely tolerate some churches remaining open, but would not tolerate any competition with the state in education, social services, and health care,” the bishop said. “In clear violation of our First Amendment rights, Barack Obama — with his radical, pro-abortion and extreme secularist agenda — now seems intent on following a similar path.” At risk of stating the painfully obvious, this kind of offensive, false and reckless language poisons the well in ways that make it impossible to find common ground.

Some Catholic bishops deserve credit. In Georgia, many religious leaders spoke out against that state’s efforts to roll back civil rights under religious liberty legislation, and the state’s Catholic bishops were clear in their opposition. “While we and the other Catholic bishops in the United States support the Religious Freedom Restoration Act,” the bishops wrote, “we do not support any implementation of RFRA in a way that will discriminate against any individual.” Republican Gov. Nathan Deal, a conservative Southern Baptist, vetoed the proposed legislation and argued Jesus would not support the bill’s intent.

In other cases, Catholic schools and universities have also damaged the cause of religious liberty. Adjunct professors often make poverty wages and lack health insurance benefits. Unionization efforts have been forcefully resisted by some Catholic university leaders who claim religious liberty exemptions. In National Catholic Reporter last year, Gerald Beyer, an associate professor of Christian ethics at Villanova University and Donald Carroll, president of the Law Offices of Carroll & Scully Inc., argued in an extensive essay that blocking adjunct unions fails both legal and moral tests. “When a Catholic university abridges the right to unionize of its adjunct faculty, it violates its own tradition’s teaching,” they wrote.

If any religious group faces persecution in the United States today, it is our Muslim brothers and sisters who are demonized in the media and the halls of power. Catholics faced bigotry and vile stereotypes as late as John F. Kennedy’s 1960 presidential campaign. Given our history, Catholics have a particular responsibility to challenge Islamophobia, which is a well-funded industry of pseudo-academics and activists who have been emboldened since Donald Trump’s election. The Bridge Initiative at Georgetown University has detailed how much work needs to be done. Only 14 percent of Catholics have a favorable impression of Muslims. Perhaps most troubling, according to the research, is that Catholics who read, watch, or listen to Catholic media have more unfavorable views of Muslims than those who don’t. What San Diego Bishop Robert McElroy has called the “scourge of anti-Islamic prejudice” requires more attention from our Catholic leaders. “We are witnessing in the United States a new nativism, which the American Catholic community must reject and label for the religious bigotry which it is,” Bishop McElroy said in a speech at the first national Catholic-Muslim dialogue. The urgency to act is clear.

It’s time to rescue religious liberty from the culture wars, reject false choices and put renewed energy into protecting Muslims who are living under a cloud of suspicion. In the end, this effort shouldn't be about serving liberal or conservative agendas, but defending core American values.

Politics | Religious liberty should unite us, not divide us