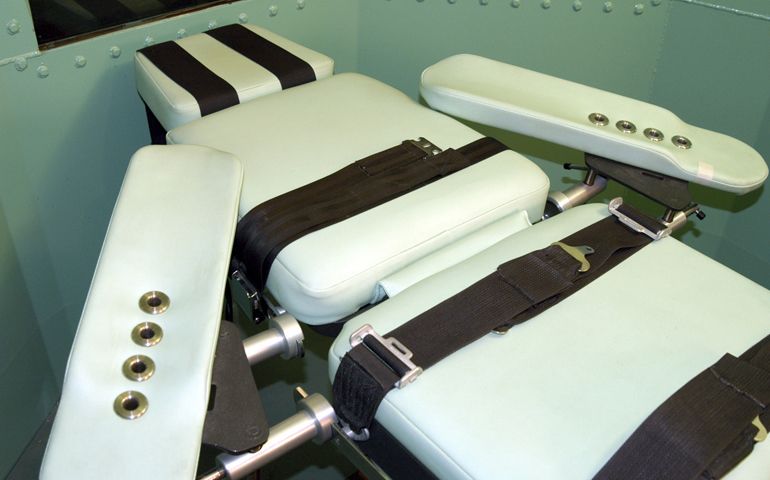 This undated photograph shows a close-up of the table where executions are carried out by lethal injection at San Quentin State Prison in California. (CNS/courtesy of California Department of Corrections)

Gray's lawyers have asked the U.S. Supreme Court to stay the execution. They are challenging the state's use of the drug midazolam in its lethal injection protocol. Midazolam has been tied to several botched executions, most recently in December in Alabama.

"After a thorough review of the petition for clemency submitted by Ricky Gray and the various letters submitted by other parties, I have decided not to intervene in this case. … Unless a court intervenes, the Department of Corrections will carry out the execution in accordance with the order of the sentencing court," McAuliffe said in a statement.

"It is the Governor's responsibility to ensure that the laws of the Commonwealth are properly carried out unless circumstances merit a stay or commutation of the sentence. After extensive review and deliberation, I have found no such circumstances. I will continue to pray for all of the individuals and families affected by these tragic and horrible crimes."

Gray's lawyers issued their own response.

"It is disappointing that Governor McAuliffe has denied clemency for Ricky Gray, despite the fact that the jurors who sentenced Ricky Gray to death never heard the truth — that at the times Ray Dandridge and Ricky committed their tragic crimes, Ricky was under the influence of PCP, a drug which caused psychosis. ... Because of these factors, an outpouring of public support for clemency for Ricky Gray included prominent members in the mental health and child advocacy professions," Jon Sheldon and Rob Lee, Gray's lawyers for his clemency case, said in a statement.

"Ricky's execution will serve no purpose other than retribution, and it will add to the losses and suffering of members of our community," the statement continued. "Ricky is, and always has been, a model prisoner. Ricky Gray is filled with remorse for his victims, and he has tried to honor the two Harvey girls by serving as a father figure to his much younger sisters and making sure their childhoods are better than what he endured. We regret that he will no longer be able to try to make amends for his past wrongs."

The denial of Gray's clemency case comes on the heels of the U.S. Court of Appeals for the Fourth Circuit's decision on Jan. 13. The courts denied a stay of execution based on Gray's claims against the drugs being used in his execution. In response, Gray's lawyers filed an emergency application with the U.S. Supreme Court on Jan. 17.

Lisa J. Fried, one of Gray's lawyers in the lethal injection case, is asking the Supreme Court "to intervene to preserve its jurisdiction to review the merits of [Mr. Gray's] claims and to prevent Respondents from achieving their goal of 'running out the clock' by executing Mr. Gray using the very method of execution Mr. Gray alleges is unconstitutional and which is currently under review in the federal courts," according to a statement from Fried.

Gray and his legal team have been arguing against the use of a compounded version of Midazolam, one of three drugs in Virginia's lethal injection protocol. His lawyers have said that the drug violates Gray's Eighth Amendment right against cruel and unusual punishment.

"Midazolam is not appropriate for use in lethal injection executions. The Virginia Department of Corrections (VDOC) plans to use midazolam, in its compounded form, which has never been used before in a U.S. execution," Fried said.

In a filed legal brief, Fried points to Midazolam's usage in recent botched execution cases, such as with the execution of Ronald Bert Smith Jr. in Alabama.

"The string of problematic executions is the inevitable result of using the sedative midazolam in combination with drugs that cause excruciating pain. It is our position that it is unconstitutional for the VDOC to carry out an execution that risks chemically torturing a prisoner to death. We will continue to challenge this risky proposed method of execution," Fried previously wrote in a brief to the Appeals Court.

The emergency application filed with the Supreme Court states that it is concerned the Court of Appeals did not "properly consider the undisputed fact that the compounded drugs that [VDOC] propose[s] to use in this execution are over 100 days beyond their beyond use date … given [VDOC's] improper storage of the drugs."

Adding, "there is no dispute that if, as the demonstrated risk indicates is likely, Mr. Gray regains consciousness during his execution, he will suffer enormously."

An NCR Editorial: The tide is turning on the death penalty