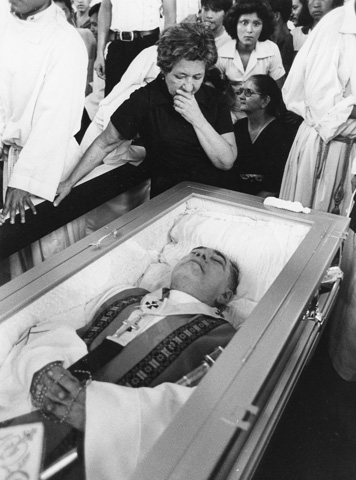 The Vatican's chief promoter of Archbishop Oscar Romero's sainthood cause joined the president of El Salvador at a government-sponsored press conference Wednesday to announce officially the date of the slain Salvadoran prelate's beautification: May 23 in San Salvador.

"I don't doubt that if Monsignor [Romero] were alive, like his work is, he would be leading this quest to unite, to join hands toward tranquility, to bring peace to our families," Salvadoran President Salvador Sanchez Ceren said.

This beatification, he continued, is a miracle for the country because through Romero's doctrine and thought, El Salvador is able "to try to unite our country and face the new challenges we have."

Italian Archbishop Vincenzo Paglia, Romero's postulator, gave Sanchez Ceren the documents outlining the research done by the Vatican on Romero's martyrdom, which led to the decree by the Congregation for the Causes of Saints to authorize his beatification. Pope Francis signed the decree Feb. 3, the anniversary of Romero's appointment as archbishop of the San Salvador archdiocese.

"Romero from heaven has become the good and blessed shepherd, who today unites all the people of El Salvador, the people for whom he gave his own life," Paglia said. "No one, neither in the past nor today, is excluded from his protection and aid. From heaven he wants all of El Salvador to walk on the path of justice and peace."

The ceremony will be in Plaza Divino Salvador del Mundo. Paglia said Cardinal Angelo Amato, prefect of the Congregation for Saints' Causes, would celebrate the Mass.

Paglia is also president of the Vatican's Pontifical Council for the Family.

Romero was archbishop of San Salvador in the early part of El Salvador's bloody 1979-1992 civil war. Shot dead while celebrating Mass in 1980, Romero has long been considered a saint by many in Latin America, but the official Vatican process of sainthood lingered for years.

Paglia also announced Wednesday that in the last three months, a sainthood cause has been opened for Jesuit Fr. Rutilio Grande, whose work is closely linked with Romero's. Thursday marks the anniversary of Grande's death; he was killed by security forces March 12, 1977.

Jesuit Fr. Jose Maria Tojeira told The Associated Press that Grande "is the first on a long list of priests killed in El Salvador."

Sanchez Ceren said Paglia stressed to him that "we must also work for [Grande] to become beatified, and that El Salvador becomes a point of reference to the world that through deeds and faith, and that work toward those most in need, you can build a new world, a world of hope, a world full of optimism."