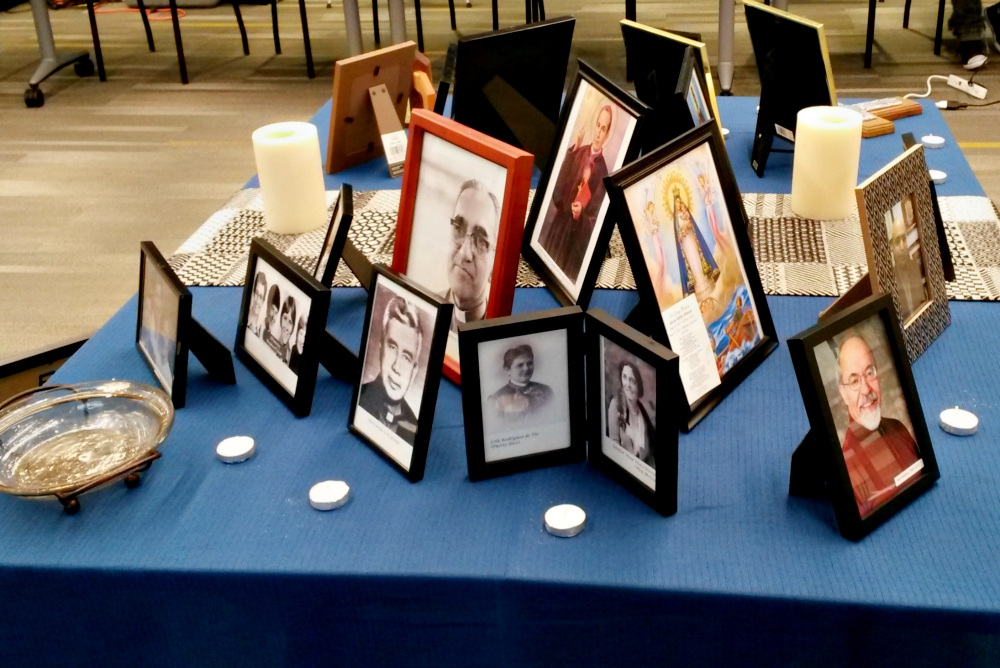 An ofrenda set up at the 2019 ACHTUS Colloquium at the University of Dayton, Ohio, June 2-5 displays photos of deceased ACHTUS members, loved ones and others. (NCR photo/Maria Benevento)

During the 2019 Colloquium for the Academy of Catholic Hispanic Theologians of the United States (ACHTUS) at the University of Dayton June 2-5, participants discussed hundreds- or thousands-year-old texts in light of their modern implications.

They didn't portray the Doctrine of Discovery as ancient history, but as a reality that influences how Latin Americans are perceived and treated today. They saw anachronistic interpretations of the apostle Paul as a more-than-academic mistake with the potential to prop up policies that harm migrants — such as when then-Attorney General Jeff Sessions used Romans 13 to justify the migrant family separation policy.

Even terms like "human rights," "human dignity," "law" and "decolonization" were linked to a centurieslong history of oppression that could be dangerous if left unexamined, a concern perhaps hinted at by the question mark that concluded the conference title: "Together en La Lucha: Seeking Justice Through Religion and Human Rights?"

The colloquium's relevance was further highlighted after a late-morning session on "Borders" included a conversation on the need to reexamine the concept of natural law. During the very next session, a participant shared the news that Secretary of State Mike Pompeo had just launched a new panel to study human rights and natural law.

LGBT advocates almost immediately expressed concern that the panel's finding will be used as an excuse to discriminate, highlighting the real-world implications theological ideas can have.

While the concept can be abused, natural law actually refers to the use of reason to discover truth across cultural boundaries, rather than a way to draw norms from biology or justify adhering to received tradition, Ramón Luzárraga, theology professor at Benedictine University at Mesa, Arizona, told NCR, echoing themes from the morning's discussion.

He attributed ACHTUS' discussion of the need to revisit natural law to the way the group's "format and procedures" make it easier to "entertain difficult questions" without self-censoring.

Neomi De Anda delivers her presidential address at a June 4 "Banquet y Fiesta" during the 2019 ACHTUS Colloquium at the University of Dayton. (NCR photo/Maria Benevento)

ACHTUS' procedures are intentionally different from a typical conference's.

"We purposefully format the colloquium to be en conjunto. It's about thinking together and really compartiendo, sharing with one another," said Neomi De Anda, a professor of religious studies at the University of Dayton who was installed as ACHTUS president June 2 and planned the colloquium during her year as president-elect.

De Anda is ACHTUS' fifth consecutive female president, although that streak will be broken next year when president-elect Hosffman Ospino, a professor of Hispanic ministry and religious education at Boston College*, takes on the role. University of San Diego theology and religious studies professor Victor Carmona was elected vice president at this year's colloquium, meaning he will be president after Ospino.

During the colloquium sessions, approximately 55 participants sat at tables arranged in a large rectangle, with presenters and moderators on one end of the room. Each hour-and-a-half session featured two presenters who spent 10 minutes or less summarizing key points for discussion from papers they had written.

A moderator then opened the floor to questions or comments meant to help the group engage the subject together rather than to pick apart each other's ideas. The wide-ranging conversations that followed featured insights from a variety of disciplines and perspectives and often branched out from the presenters' original topics, with participants addressing each other's comments directly.

ACHTUS "models a different kind of way of being an academic" that can come as a relief, said Jacqueline Hidalgo, a professor of Latina/o studies and religion at Williams College in in Williamstown, Massachusetts, and past-president of ACHTUS.

In "Latino/Latina theological work" there's an idea that theology "grows out of and is done in community," she explained, "and I think that there is an attempt to model that, and it doesn't feel adversarial the way that a lot of other academic spaces can sometimes feel."

Hidalgo was one of several ACHTUS members who said they also enjoy the rare experience of being in a room full of Hispanic scholars when many are the only one, or at best one of two or three, in their departments.

"I'm not sure there's a Catholic institution in the country now that has three Latino/Latina faculty in their theology or religious studies department," said De Anda. Being able to come together is not only fulfilling, but also lets the group "run by the rules that we have established," in a way they can't in spaces dominated by white Anglo men.

One theme that emerged from conference discussions was that certain concepts meant to be liberating didn't always resonate with or work for Hispanic Catholics, at least not as implemented or controlled by current world powers.

Néstor Medina, a professor of religious ethics and culture at Emmanuel College at Victoria University in the University of Toronto, who became an honorary member of ACHTUS during this year's colloquium, presented a paper on the Doctrine of Discovery, the theme of the first of four sessions.

He argued that principles like human rights, human dignity and decolonization need to be "interrogated," with attention paid to colonial history, who decides how they are defined and observed, and the work that indigenous and other communities are already doing that might fit into a different framework.

For example, some communities relate more to the concept of "buen vivir" or "good living," which is based less on individual and property rights and is "akin to a common good ... as it's defined by the community, not by a small group of people," Medina said.

Néstor Medina, a professor of religious ethics and culture at Emmanuel College at Victoria University, the University of Toronto, speaks during a panel on the Doctrine of Discovery at the 2019 ACHTUS Colloquium June 3. He is seated between Lauren Guerra of Loyola Marymount University (left), a fellow presenter, and moderator Carmen Nanko-Fernandez of the Catholic Theological Union in Chicago. (NCR photo/Maria Benevento)

Colloquium participants also discussed the imperfections of past movements for liberation. Jeremy Cruz, a professor of theological ethics at St. John's University in Queens, New York, argued in a paper that Hispanic Catholic labor leader and activist César Chávez's contributions to social ethics had been unfairly ignored, but also that Chávez's shortcomings should be recognized and discussed.

During the "Movements Plus Cincuenta Años" session, Hidalgo offered a presentation on the Movimiento Estudiantil Chicanx de Aztlán (MEChA), which recently decided to drop Chicanx and Aztlán from its name in an effort to be more inclusive, sparking protests from alumni.

When "an older generation hears a younger generation saying, 'The dreams you dreamed don't work for me,' there is a struggle," Hidalgo said. But she's arguing that "they actually are still dreaming those dreams, it's just they have to carry them on in a different way. Because movements move."

ACHTUS isn't meant to be an insular space for Hispanic Catholic scholars of religion and theology. Their work is rooted in the community, and they hope for their scholarship to influence discussions in the wider church, as well conversation and policies throughout society in general.

"The methodology we use ... is pastoral y teología de y en conjunto," De Anda told NCR, later adding in an email that the Spanish phrase doesn't translate easily, but "basically means that care for persons and thinking about God go hand in hand and always happen within groups."

Members of ACHTUS and their guests attend a "Banquet y Fiesta" June 4 at the University of Dayton as part of the 2019 ACHTUS Colloquium. (NCR photo/Maria Benevento)

Other ACHTUS members also pointed to the organization's broader role. "We are here to provide a space and to give voice to Hispanics who may not receive space and voice in other theological organizations necessarily," said Luzárraga. "But having said that, what we're producing is for the benefit of the universal church."

Examining how to approach universal truths without losing the particularity of specific cultures is "an interesting challenge, and I think ACHTUS is in a unique place as both Hispanic and Catholic to help address that challenge, although we can't do it alone," he said.

Ospino, who is planning next year's colloquium with the focus of practical/pastoral theology, wants to increase participation among the approximately 200 ACHTUS members, but also to bring in more Catholics of all ethnicities, collaborate with other groups, and "get the word out" about their work.

Non-Hispanics who are already involved and attended the colloquium include Jonathan Tan, a professor of Catholic studies at Case Western Reserve University in Cleveland, and University of Dayton religious studies professor Cecilia Moore, who presented a paper on the history of the Black Catholic Theological Symposium.

ACHTUS and the Black Catholic Theological Symposium held a joint colloquium in 2017. Tan, during one of the 2019 ACHTUS sessions, brought up the need for more collaboration between Hispanic and Asian Catholics.

Ospino said he would also like to partner with the Catholic Theological Society of America and the College Theology Society, which typically receive more attention than ACHTUS, as well as with international organizations and the U.S. bishops. 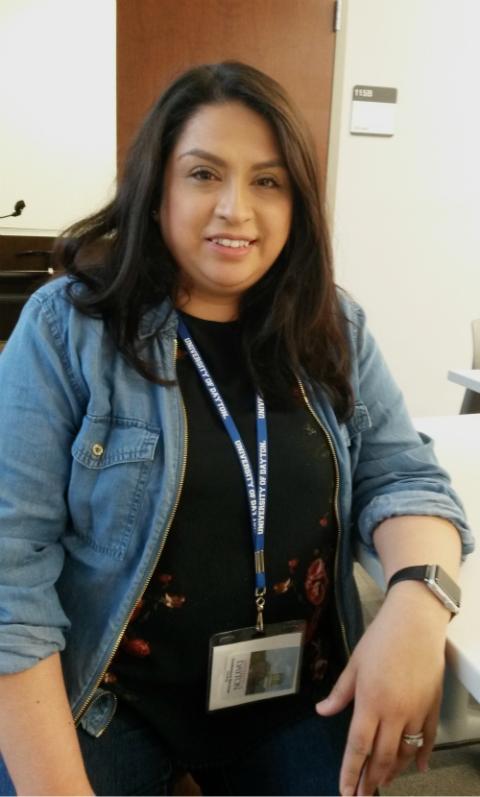 Claudia Avila Cosnahan, director of evangelization at the Cathedral of Our Lady of the Angel in Los Angeles, at the 2019 ACHTUS Colloquium in Dayton, Ohio (NCR photo/Maria Benevento)

While no Hispanic bishops attended the 2019 colloquium, ACHTUS has a good track record of reaching out to them, and they attend as their schedules permit, Ospino told NCR. But "bishops and theologians can do much more to invite one another mutually to engage in that dialogue."

The recipient of ACHTUS's 2019 Virgilio Elizondo Award, Edgard Beltrán, participated in the historic 1968 conference of Latin American bishops at Medellín, Colombia, and helped start the first nationwide encuentros for Hispanic Catholics. When he addressed the ACHTUS Colloquium June 5, he also discussed the need for theologians and bishops to accompany and serve the people together.

The Forum for Theological Exploration this year began funding an ACHTUS mentoring program where academics can accompany prospective doctoral students as they discern and build the skills needed for successful applications.

But Claudia Avila Cosnahan, director of evangelization at the Cathedral of Our Lady of the Angels in Los Angeles and one of the four young women that make up the program's first cohort, said the mentoring didn't start with the formal beginning of the program.

An affiliate member of ACHTUS, Avila Cosnahan has been involved since she was studying for her master's in pastoral theology more than five years ago. "It's always been a community of mentorship for me," she said.

*The name of the college where Ospino teaches has been corrected

This story appears in the La Iglesia Hispana feature series. View the full series.
A version of this story appeared in the June 28-July 11, 2019 print issue under the headline: Hispanic colloquium engages real-world theology.