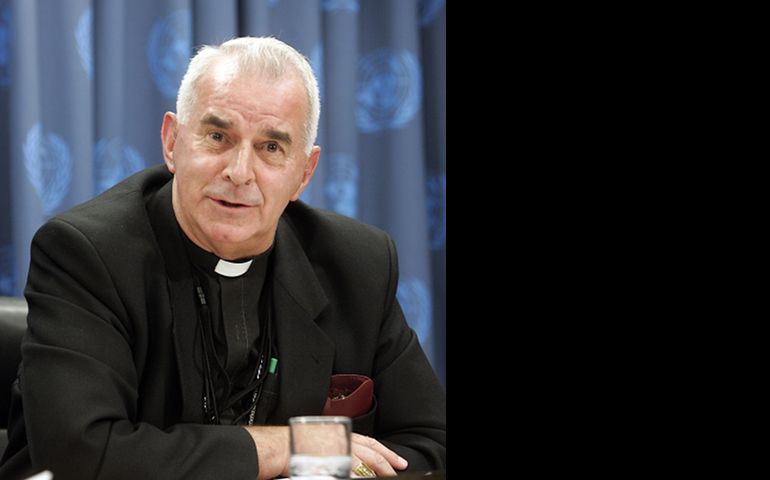 Rome — Cardinal Keith Patrick O'Brien, a Scottish archbishop who resigned last week following accusations of improper sexual conduct with priests, has said that "my sexual conduct has fallen below the standards expected of me as a priest, archbishop and cardinal."

O'Brien, who as a cardinal is entitled to take part in the secret vote to determine the next leader of the Roman Catholic Church, will recuse himself from the vote so as to not attract media attention.

The archbishop of Saint Andrews and Edinburgh in Scotland until the Vatican announced his retirement Feb. 25, O'Brien has been accused of improper sexual contact with three priests and one former priest in incidents over the last three decades.

O'Brien previously denied the allegations through his spokesman. On Saturday, he released a statement acknowledging improper acts and asking forgiveness.

"In recent days certain allegations which have been made against me have become public," O'Brien said in the statement.

"Initially, their anonymous and non-specific nature led me to contest them. However, I wish to take this opportunity to admit that there have been times that my sexual conduct has fallen below the standards expected of me as a priest, archbishop and cardinal."

"To those I have offended, I apologise and ask forgiveness," O'Brien wrote. "To the Catholic Church and people of Scotland, I also apologise.

"I will now spend the rest of my life in retirement. I will play no further part in the public life of the Catholic Church in Scotland."

O'Brien's recusal last week from the upcoming conclave led some to note a difference in handling of cardinals accused of sexual impropriety or mishandling of abusive priests.

At the last papal conclave, which resulted in the election of Pope Benedict XVI in 2005, the Vatican indicated cardinals were compelled to take part in the vote, regardless of their handling of sexual abuse.

The Vatican specified then that Cardinal Bernard Law, who was disgraced after reporting on his handling of abusive priests in Boston, was still expected to take part in the conclave.

O'Brien had been the third cardinal to face either allegations of abuse or questioning of their handling of priest abusers in the weeks leading up to this conclave, after retired Los Angeles Cardinal Roger Mahony and New York Cardinal Timothy Dolan.

Mahony has been prohibited by his successor, Archbishop Jose Gomez, from participating in public ministry in his diocese because of his handling of sex abuse cases in the 1980s.

In an interview with Catholic News Service on Feb. 28, Mahony said he had been told by the Vatican's ambassador to the United States that he was still expected to attend the conclave.

"Without my even having to inquire, the nuncio in Washington phoned me a week or so ago and said, 'I have had word from the highest folks in the Vatican: you are to come to Rome and you are to participate in the conclave,' " Mahony told CNS.

Dolan, who is also the president of the U.S. bishops' conference, was deposed in mid-February regarding his handling of sex abuse cases while he was archbishop of Milwaukee from 2002 to 2009.

O'Brien is known in the UK for staunchly opposing measures to legalize same-sex marriage. In a March 2012 interview with BBC Radio, O'Brien said same-sex marriage would cause society to be "degenerated further than it has already degenerated into immorality."

O'Brien's statement Saturday notes the cardinal will not be giving any further statements and is "now out of the country and will not be available for interview."

The Vatican said Feb. 25 O'Brien had submitted his resignation to Pope Benedict in November, in expectation of his 75th birthday in March. Catholic bishops are required by canon law to resign at age 75, unless granted an exception by the pope.

At a press conference announcing the resignation, the Vatican spokesman, Jesuit Fr. Federico Lombardi, said he would not comment on the cardinal's decision to not partake in the conclave.

Basilian Fr. Thomas Rosica, who provided English translation at the press conference, said Pope Benedict had meant to approve O'Brien's resignation earlier, but "because of the date of the pope's resignation, some things were held up a bit."

"Our role here is simply to confirm the resignation," Rosica said then. "We do not comment on other stories, or things you may have heard."

O'Brien's recusal from the conclave leaves Great Britain without someone who will participate in the vote for the next pope.

Brady has faced repeated calls for resignation following his own handling of abusive priests.

A gathering consensus for radical change

Pope to live at cloistered monastery

On this day: Bl. Frederic Ozanam