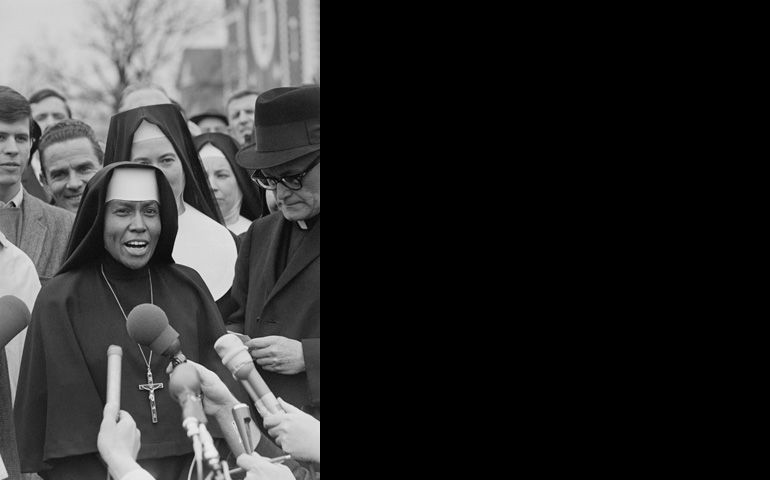 Sr. Antona Ebo delivers a statement after police halted a march to the country courthouse in Selma March 10, 1965, (AP Images/©Bettmann Corbis)
This article appears in the Selma march at 50 feature series. View the full series.

Editor's note: Every day this week, we are publishing reflections of Bloody Sunday, its aftermath and the march from Selma to Montgomery, Ala., to commemorate the march's 50th anniversary. Find more Selma reflections.

When Sr. Antona Ebo reported for work at St. Mary's Infirmary in St. Louis the morning after Bloody Sunday, her staff was discussing the brutal attack by Alabama state troopers on civil rights demonstrators. As she learned the shocking details, she casually remarked that she would "be down there helping those people" if she weren't so busy.

She confesses ambivalent emotions. "One side of me said, 'I don't want to be a martyr,' but the other side said, 'Put up or shut up.' " She felt that God was calling her bluff.

A mass meeting was underway when the St. Louis contingent filed into Brown Chapel, headquarters of the Selma protest. Spotting Ebo, the Rev. L.L. Anderson exclaimed, "This is the first time in my life I am seeing a Negro nun. To see her tells me you don't have to be white to be holy."

She was summoned to the microphone, and she told the packed church, "I am here to witness to your rights to go to register and vote."

Back in St. Louis, Ebo was an instant celebrity. Her photo appeared in The New York Times. Reporters called from all over the country, even from the Vatican.

Twenty years later, Ebo returned to Selma. Mayor Joe Smitherman told her, "We often wondered what became of that little colored lady that they dressed up like a nun."

Selma march at 50: 'You represented all of us who couldn't go'

Searching for a relationship like Martin Luther and Coretta Scott King's

Selma march at 50: Bloody Sunday 'was just heartbreaking to see'