Skip to main content
This story appears in the Selma march at 50 feature series. View the full series. 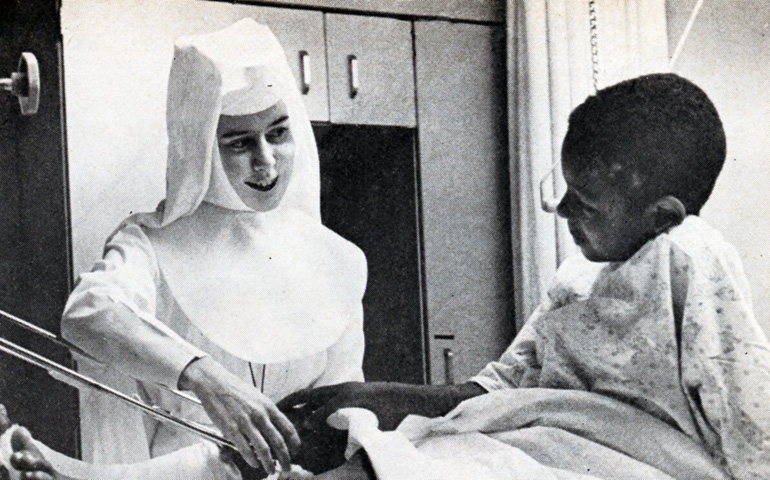 Sr. Barbara Lum at work in the pediatric ward at Good Samaritan Hospital in Selma, Ala. (Archives of the Sisters of St. Joseph of Rochester)

Editor's note: Every day this week, we are publishing reflections of Bloody Sunday, its aftermath and the march from Selma to Montgomery, Ala., to commemorate the march's 50th anniversary. Find more Selma reflections.

St. Joseph Sr. Barbara Lum came to Selma, Ala., from Rochester, N.Y., in 1959 to work at Good Samaritan Hospital and teach in its practical nursing program. Her African-American students told her of indignities they suffered under the Jim Crow system. Because the white Sisters of St. Joseph lived and worked in the black community, they too were shunned by most of Selma's white residents.

The sisters' convent was next to Tabernacle Baptist Church, scene of the first voting rights meeting. They stood on a radiator in Lum's room to view the crowd of hostile white men gathered outside the church. "They were standing there with billy clubs, some of them in plain clothes and some in uniforms. They lined both sides of the street. We were really terrified that people were going to be beaten when they came out of church."

On Bloody Sunday, Lum rushed to the Good Samaritan emergency room to care for demonstrators injured in the attack on the bridge. She treated people suffering scalp lacerations, broken bones and the effects of tear gas. "Most of them had been hit with billy clubs or fallen and run over by deputies on horses," she recalls.

When hundreds of out-of-town civil rights supporters rallied in Selma, the sisters improvised lodging in an unused hospital wing. "We just put down mattresses and people slept there, sort of dormitory style. Sisters in one area and priests in another. Our dietary [department] opened up and cooked more meals so that they all got fed at the hospital."

Archbishop Thomas Toolen of Mobile, Ala., forbade the sisters from taking part in demonstrations, but they did not complain. "I felt that it was very important that we stay at our posts," Lum said. She never knew when she might be needed to care for victims of another assault.

A version of this story appeared in the Feb 27-March 12, 2015 print issue under the headline: Sr. Barbara Lum: 'We were really terrified'.