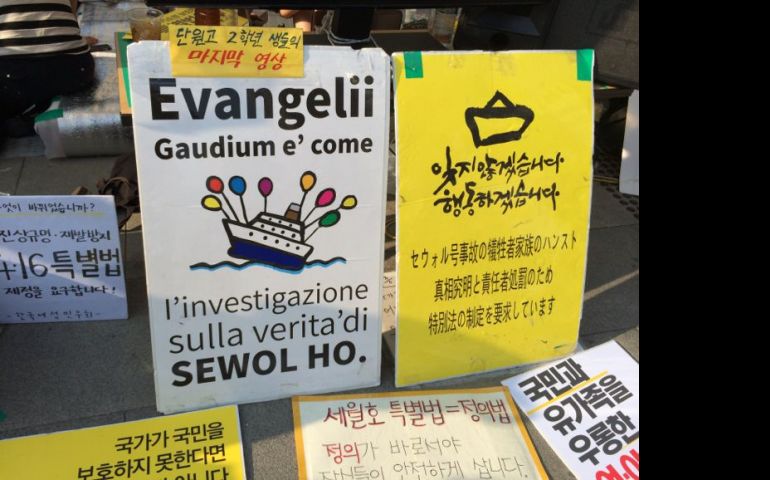 Cardinal Andrew Yeom Soo-jung, archbishop of Seoul, has called upon families of the victims in the April Seoul ferry tragedy “to concede at a certain point” their demands for an independent investigation and prosecution for the culpable.

In a press conference, he also warned reporters against exploiting the pain of the Sewol families, calling on everyone to help heal the pain.

Fasts on behalf of the Sewol families have spread throughout South Korea and abroad in recent weeks. Kim Young-oh, the father of a Sewol victim, ended his 46-day hunger strike Thursday.  On that day 250 Koreans announced they would begin a fast on the square he and other Sewol families had occupied for more than a month

Cardinal Yeom’s remarks are being interpreted by some Catholics in Seoul as distancing himself from Pope Francis who met with Sewol families in four instances, word a yellow pin of support and stopped his Pope mobile to greet Kim who had been fasting 34 days at the time. The men shook hands.

Later when questioned if, in offering his support, he had entered South Korean politics, Francis said he was simply responding to human pain, which, he said, comes first in his thinking.

Yeom’s call for the Sewol families to “concede” is being interpreted by some here as a too harsh and lacking feeling.

“Yeom is right in urging everyone to help heal the pain of Sewol disaster, and his warning against political exploitation of the Sewol tragedy is reasonable as there are always people ready to exploit a situation for their causes,” The Korea Herald wrote.

“However, his remark on the need for the families to concede at a certain point is a little too harsh and unfeeling, especially coming from a clergyman. Instead of healing the families, Yeom has rubbed salt into their wounds. His comment, in light of Pope Francis’ actions and words in regard to the Sewol families during his recent visit, seems particularly ungracious and unkind to the families.”

In a radio interview, Kim said he had ended his fast at the insistence of his daughter and his mother. He realized that he needed to recover his strength to keep up a prolonged fight, he added.

On Wednesday, the Sewol families held a second meeting with the Saenuri Party, following the first meeting Monday. The families stuck to their demand for a special commission to be given the powers to investigate and indict while the ruling party remained steadfast in rejecting the demand.

.Fox is NCR publisher and can be reached on Twitter @NCRTomFox

We need more flexibility in our liturgies

Paper asks Mexican drug cartels: What can we do?