Speaking to a room packed full of people from around the country, Pax Christi International co-president Marie Dennis spoke here in Columbus, Ga last night and called for the U.S Catholic Bishops to send an official delegation to Iraq. 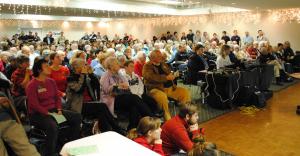 Emphasizing the need for people to remember Iraq in current policy discussions, Dennis said she hoped that such a delegation would be a visible sign that the Catholic church cares about accompanying Iraqi people in their struggles since the U.S.-led invasion of 2003.

Dennis spoke at a gathering sponsored by Pax Christi USA. The event tied together the current discussion concerning the direction of the war in Afghanistan with the situation on the ground in Iraq.

Pax Christi USA calls itself 'the national Catholic peace movement' and is one of 20 national chapters which are part of the larger, global organization Pax Christi International. Dennis is the co-president of that organization. 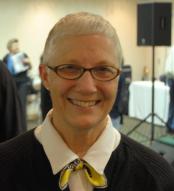 Speaking of her experience from a delegation to Iraq with others, including NCR contributor Bishop Thomas Gumbleton, Dennis told attendees that people in Iraq are struggling to find ways to continue their lives - but are doing so in ways many of us might not be able to understand.

"As everywhere in the world where war is raging and people are suffering, life goes on," said Dennis. "People are struggling to keep violence away from their doors, but they are living with meaning. They are relating to each other, building good relationships. There is life in Iraq."

Rome says goodbye to its bishop

The struggle over Communion for divorced and remarried Catholics continues