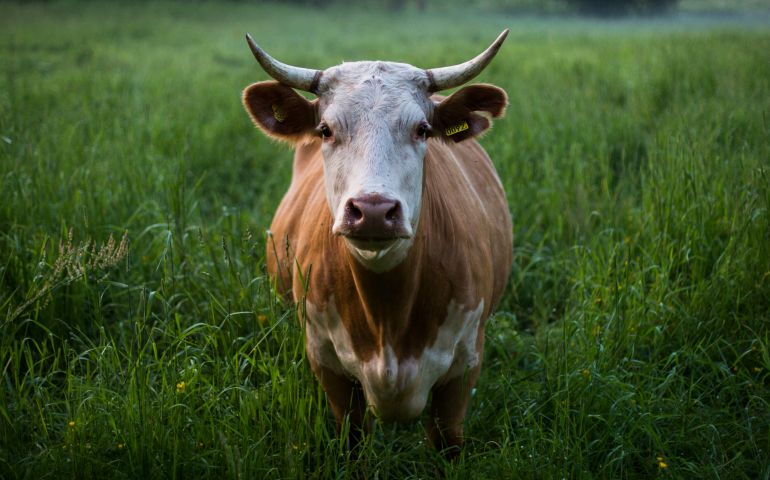 Donald Trump has frequently been criticized for denigrating women, for example, comparing them to pigs. Unwittingly, Trump was actually saying that women are loving and highly intelligent. A recent petition, through which a family was trying to prevent their miniature pig from being removed from their home, pointed out these two qualities of pigs, not only of those kept as family members but also those unnamed and unloved individuals suffering in factory farms. Besides being loving  and intelligent, pigs are also very sociable, not a bad quality given the necessity of relationship for happiness and thriving, but it is also one that contributes to the suffering of sows confined in gestation crates.

Comparing humans to their other animal cousins is usually intended as an insult to the former. To call someone a rat, a pig, a jackass, or a chicken -- and the list goes on -- is meant to demean the human. The word animal itself is used as a slur, as in "they're no better than animals," although animal denotes a being with soul, with spirit, one that is animated and able to move. Such language betrays a dangerous anthropocentrism and a hierarchical worldview with no recognition that every species and individual is a revelation of the divine. Sly as a fox, dumb as an ox, silly as a goose seem to be projections rather than scientifically proven, or simply observable, traits. Trying to show sympathy to suffering humans, someone might say they are treated like dogs, a worrisome comment on the treatment of real dogs. We occasionally attribute qualities we admire to our animal cousins -- busy as a beaver or bee, wise old owl -- but undercut their value by assigning the generic and dismissive "roadkill" to all the lovely animals destroyed by our speed and carelessness as they go about their daily lives.

Our human tendency to objectify other species is evident in the pronoun it applied to creatures who are decidedly he or she and in the term livestock, used for cows, pigs, chickens, turkeys and others. The term acknowledges that these creatures are living beings but have no inherent rights; instead, they belong to humans, they are a way of making money, and they, like a piece of paper, are simply stock that is owned and traded. They have value only if they are named and part of a human family; otherwise, billions of farmed animals are mere objects in agribusiness factories. We would do well to remember Thomas Berry's famous line, "Earth is a community of subjects, not a collection of objects."

We might also make some progress in raising our awareness about the value of all living beings if we started counting them in disasters. We rightfully lament the thousands of human lives lost at Hiroshima and Nagasaki in 1945, as well as at other human-caused atrocities before and since. But instead of saying that, for example, "80,000 lives were lost," we could help raise our consciousness about reality if we would always report that "80,000 human lives -- and an unknown number of other lives -- were lost." An unknown number, countless lives, of mammals, birds, reptiles, amphibians, and water creatures are destroyed in both manmade and natural catastrophes; these need to be acknowledged and, where necessary, repented. Such awareness and compassion were clear in an email from Farm Sanctuary, home to abused and abandoned farm animals, when a California wildfire forced evacuation from the refuge. The report said that the fire was largely contained, "but not before scorching more than 38,000 acres, destroying multiple homes, and leading to at least one human death (and an unknown toll on wildlife and other animals in its path)."

Plant life too needs acknowledgement and respect; vegetation, soil, and water are too readily conflated into property. If Earth, including all her ecosystems, is a self-generating, self-nourishing, and self-governing organism -- and she is -- then to relegate the planet, or parts thereof, to the status of property is to belittle the source from which we and all other species have emerged. Humans do indeed have responsibility to care for the land and water and for the flora and fauna dependent upon them, but always recognizing that we too are members of the greater community of life. To speak of the land instead of property might remind us of environmentalist Aldo Leopold's definition of land as including "soils, waters, plants, and animals."

As we evolve slowly toward adulthood as a species, we need to move from the imagined independence of our adolescence to a realization of our interdependence with all other species. It is a move from stewardship to membership in an Earth community where the divine is not an absentee landlord but an immanent and intimate presence in every being. It is a move from an arrogant anthropocentrism to a humble biocentrism. It is a move from causing the current mass extinction of life-forms to being protectors and preservers, acting with gratitude and reciprocity.

As we do that, we might embrace the term species for ourselves, for that is what we are, a species comprising many races, ethnicities, and cultures, unique in our use of symbolic language but united with all others in our common origin in the planet and in the stars. Let our language reflect that immense dignity and worth.

[Paulette Zimmerman is a School Sister of Notre Dame. After 35 years teaching English in formal education, she ministered as a Justice, Peace and Integrity of Creation coordinator within the School Sisters of Notre Dame. She presently tutors ELL students in a local elementary school and continues her ecological work in various ways.]

Tales from the garden: Sisters share stories of going vegetarian