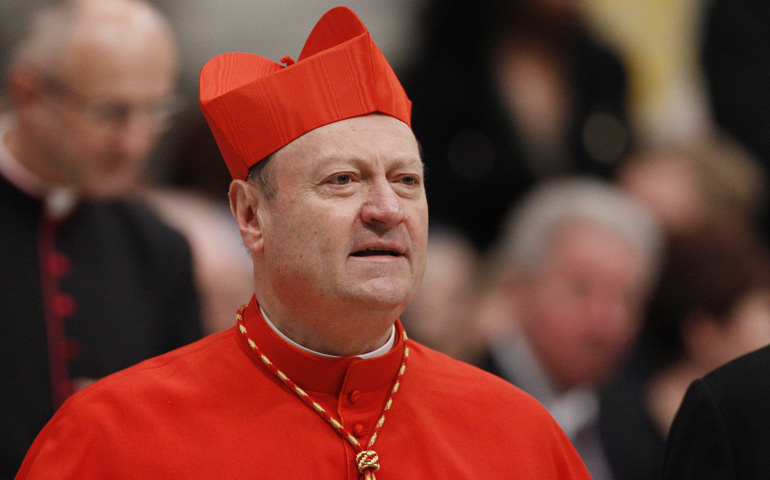 Cardinal Gianfranco Ravasi, president of the Pontifical Council for Culture, in 2010 (CNS/Paul Haring)

Openly campaigning for the papacy is not only taboo, it's usually fatal. Most cardinals are of the belief that if someone actually wants the job, they have no idea what it's about.

On the other hand, sometimes circumstances align to thrust someone into the spotlight, creating an opportunity to either boost or diminish his electoral prospects, even if that's not officially the purpose of what's going on.

Today one such papabile steps onto the stage in Italian Cardinal Gianfranco Ravasi, a 70-year-old biblical scholar, essayist and intellectual omnivore.

From Sunday evening to Saturday morning, Ravasi will preach the Lenten spiritual exercises for the Roman Curia, an annual retreat during which the Vatican more or less goes into lockdown while its personnel gather in the Redemptoris Mater chapel in the Apostolic Palace.

Ravasi is the son of an anti-fascist tax official who was lost to the young Ravasi for 18 months after deserting the army during World War II. In a typically reflective flourish, Ravasi later said his lifelong search for permanence is probably related to that early sense of loss.

While working on his doctorate at the Pontifical Biblical Institute, Ravasi spent time in Turkey, Iraq, Syria and Jordan on archeological digs, and later served as prefect of the prestigious Ambrosian Library in Milan. Among those who know Ravasi, his penchant for literary allusion is legendary; rarely can he talk for more than five minutes without citing wildly diverse sources such as St. Augustine, Isaac Newton, Vladimir Nabakov and the Russian Orthodox liturgy.

Despite his prodigious learning, Ravasi has a strong popular touch. On Friday night in Rome, he delivered some reflections on Albert Camus at the Jesuit-run Church of Gesù, which struggled to contain an overflow crowd.

Ravasi was scheduled to lead this week's retreat, delivering a series of spiritual reflections on the Psalms, long before Benedict announced his historic decision to renounce the papacy. The timing, however, means Ravasi now has a rare opportunity to make a final impression on the other cardinals of the Roman Curia, who are certain to be among the king-makers in the impending conclave. Moreover, his words will certainly make the rounds in the form of written summaries and rebroadcasts on Vatican Radio, giving the whole world an indirect weeklong look at the man who could be pope.

The following is a piece I published about Ravasi in September, which provides some background on a figure who may or may not be a serious candidate for the papacy but who is undoubtedly among the most intriguing personalities who will file into the Sistine Chapel sometime in March.

Unperturbed either by the Vatican's internal turmoil or by broader tensions in Catholic life, the hyper-erudite Ravasi continues marching to the beat of his own drum, pressing ahead in dialogue with the worlds of art, science, and culture. At a time when relations between the church and secular society are widely perceived to be deteriorating, Ravasi's "Courtyard of the Gentiles" project, designed to foster ties with non-believers, is perhaps either the most courageous, or the most quixotic, official initiative going.

Two recent news items offer reminders of the unique spot that Ravasi, 69, occupies on the landscape.

First, the "Courtyard of the Gentiles", which has already organized high-profile events in Bologna, Paris, Bucharest and Tirana, arrives this week in what might well be considered the beating heart of secularism: Stockholm, Sweden. (According to a 2009 Gallup survey, Sweden actually ranked as the "last religious" nation on earth, as measured by low rates of attendance at church services coupled with high percentages of the population who profess no religious belief or affiliation.)

The idea of the "Courtyard of the Gentiles" is to meet non-believers halfway, but in this case one might say Ravasi is going all the way, engaging secular thought and culture in one of its strongholds.

The Sept. 13-14 program will put Ravasi and other Catholic thinkers into dialogue with a cross-section of Sweden's leading intellectual lights on these questions: "Can one choose a 'World without God?' How far can the human person go in the field of creation? Are there limits, and if so, what are they?"

One of the venues for the meeting will be the Royal Swedish Academy of Sciences, the body that awards the Nobel Prizes.

Ravasi introduced the program on Sunday with a lengthy essay in Avvenire, the newspaper of the Italian bishops conference. In a typical flourish, most of the piece consisted of Ravasi's reflections on three contemporary Swedish novelists – whose books, for all the world, it sounded as if he'd actually read.

Among other nuggets, Ravasi observed that perhaps styling the project as a dialogue with "non-believers" stacks the deck rhetorically in an unhelpful way. He quoted Thomas Hammarberg, a Swede and former European Commissioner for Human Rights, who is not a religious believer, but who objects to terms such as "atheist," "agnostic" and "non-believer," on the grounds that "we all, in some way, have a faith."

Ravasi also noted that the Stockholm initiative has an obvious ecumenical component, since Sweden is a Lutheran nation, and until 2000 the Lutheran Church of Sweden was the official state church. Ravasi said that Antje Jackelén, the female bishop of Lund, will not only be an enthusiastic participant in the Courtyard project, but she's also invited Ravasi to be a permanent member of a theological association she founded for the protection of the environment.

Ravasi ended his essay with a familiar quotation from Nietzsche, which serves as a sort of unofficial motto for the Courtyard initiative: "Only a person of deep faith can afford the luxury of skepticism."

On another front, Ravasi has also confirmed that the Vatican, in the form of his Pontifical Council for Culture, will have its own pavilion at the 2013 edition of the famed Venice arts festival, known as the "Biennale" because it's held every two years. The Vatican will use its space to host well-known artists whose work reflects, in some form, on the first eleven chapters of Genesis.

Although Ravasi has not confirmed who those artists will be, a news item on Monday in the Italian press suggested that names under consideration include Greek painter and sculptor Jannis Kounellis; American video artist Bill Viola; and Indian-born British sculptor Anish Kapoor. None, for the record, is Catholic.

For Ravasi, staging a pavilion at a major international arts festival is no gimmick. It's a concrete way of showing that the church has something more than moralizing or disapproval to offer artists – that it wants a dialogue, too, beyond the usual polemics.

The "Courtyard of the Gentiles" event this week probably won't make a big media splash, in part because the themes are abstract and not the stuff of sound-bites, in part because any news holes for Vatican activity likely will be dominated by Benedict's Sept. 14-16 trip to Lebanon.

Still, both Stockholm and the coming Venice festival are intriguing initiatives, and they consolidate Ravasi's profile as a figure to watch: "Stay thirsty, my friends!"