Skip to main content
News
This story appears in the Take and Read feature series. View the full series. 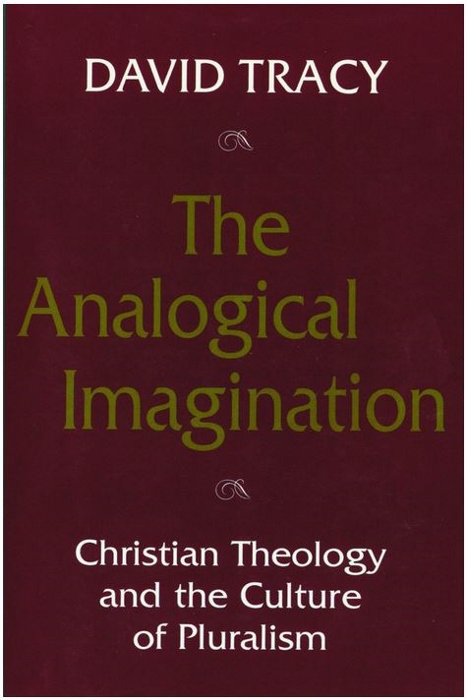 Cover of "The Anaolgical Imagination" by David Tracy (Crossroad Publishing, 1998)

The Analogical Imagination: Christian Theology and the Culture of Pluralism
by David Tracy
(Crossroad Publishing, 1998)

It was over 25 years ago that I read John Irving's remarkable A Prayer for Owen Meany. I remember the book as the finest fiction I had ever encountered. Recently I had the opportunity to download it as an audio book. While I enjoyed it even more the second time, I was also slightly dismayed about how much I had forgotten, how many vivid characters had faded from memory, the horde of outrageous humor that had evaporated, and the profound human and spiritual insights that had been virtually erased from my memory banks.

Similarly, I have always remembered Analogical Imagination as a paradigm-shifting read, and have regularly referenced it in my teaching and writing. Aware of my faulty memory and in preparation for crafting this reflection, I thought it wise to reread this classic in its entirety. Akin to my revisiting of A Prayer for Owen Meany, however, I was both chagrined at how much I had forgotten about this treasure, yet gratified that so many ideas that I instinctively hold so firmly can be anchored in Tracy's opus. There are three central tenets of my own theologizing that have distinctive roots in this amazing classic. While closely related to each other, we will examine them here -- as Tracy advises -- as distinct but not separate.

Already in Blessed Rage for Order Tracy asserted the critical role of "common human experience" in the theological enterprise, noting that Christian theology today is best understood "as philosophical reflection upon the meanings present in common human experience and the meanings present in the Christian tradition." He returns to this theme in Analogical Imagination¸ arguing that classic works flowing from the human spirit -- be those in art or religion -- are necessary resources for interpreting our world and beliefs.

Analogical Imagination was written in a period of eroding faith, when the tenets of Christianity were met with increasing skepticism in the academy and society. Thus Tracy's commitment to theologizing in view of shared human experiences allowed him to engage theologically with a common grounding in humanity. This contribution has become increasingly important as the number of those unaffiliated with any religion continues to expand in this country and abroad, as does the number of those who self-identify as agnostics or atheists. While not directly engaged in training agnostics, atheists or humanists -- although they are populating our seminaries and divinity schools -- I am training people who will need to collaborate with representatives of these belief-streams both on religious (e.g., chaplaincy) and social (e.g., homelessness) endeavors. Beyond pastoral or strategic collaboration, I wonder whether a Roman Catholic and humanist chaplain at a hospital can actually share some kind of depth reflection on their work together without compromising their own form of believing. Can a Roman Catholic engage in what is traditionally called theological reflection with someone who has no "theology"?

My response to this ministerial quandary has been a form of meaning-making called "reflective believing," as I* described in my* 2015 book, Theological Reflection across Religious Traditions: The Turn to Reflective Believing. The beginning point of this interpretive venture is shared human experience, especially as narrated through storytelling and ritualizing. It was Tracy's emphasis on the centrality of human experience for the theological enterprise that triggered this venture into a type of interpretation that did not require theological categories but still could broach the transcendent.

Tracy's valuing of human experience finds a Christological parallel for me in his assertion that the one classic event and person "which normatively judges and informs all other Christian classics . . . [is] the event and person of Jesus Christ." A classic is any event, text, image, symbol or person with an "excess of meaning" that provokes understanding in the present with a kind of "permanent timeliness." Considering Jesus Christ as a classic allows me to think about, preach about, teach about a Jesus deeply rooted in humanity. Just as the early disciples first experienced his humanity in order to discern his divinity, so can I employ the human stories, deeds and parables of Jesus as a resource in interfaith dialogue and meaning making with non-theists without having to abandon my belief in his divinity. Tracy has enabled me to ponder how humanity is a valuable portal to transcendence, particularly in Jesus mode.

Another central concept in Analogical Imagination that has become a regular part of my teaching and believing is Tracy's emphasis on the analogical imagination for theologizing in this pluriform age. Analogical language for Tracy is capable of recognizing and articulating similarity-in-difference, even to the point of theologizing about a God who -- despite the infinite chasm between humanity and divinity -- can be grasped as more like the created world than unlike it. Tracy does see the need for a dialectical perspective in theology that emphasizes the fundamental rupture between God and creation and considers it an important antidote to the tendency to confuse every human activity with the work of the Holy Spirit. At the same time, however, Tracy holds that analogical thinking and speaking is essential in this increasingly pluralistic world so that despite our differences we can engage in fruitful and public conversation.

As a Capuchin-Franciscan friar, I find Tracy's turn to the analogical resonant with central tenets Franciscan spirituality. Francis of Assisi is celebrated for his perception of creation as kin, worthy of respect and praise. Multiple are the tales of Francis preaching to birds, talking to wolves, and even smearing the walls with meat so that they could join in the Christmas feast. Every creature was a gift from God, a generosity of vision that extended to the poorest and most marginalized of humankind. Francis' vision is summarized in his "Canticle of Creation" that claims sun, moon, fire, water, earth and air as siblings in God. More systematically, Bonaventure's The Journey of the Soul into God, demonstrates how the universe is marked with God's fingerprints. Ultimately, Bonaventure concludes that the God whom Genesis remembers as declaring each stage of creation "good," is best named as the Highest Good (summum bonum). All of creation has its origin in this ultimate Good.

Finally, I find Tracy's emphasis on the analogical useful when teaching sacraments. Since the mid-20th century, theologians have attempted to restore something of the elasticity that the early church predicated of sacramentality. The so called "sacramental principle" asserts that everything in the created world has the potential to reveal God. That concept is often daunting to those suspicious of contemporary culture. However, Tracy's similarity-in-difference reasoning embraces the dialectical as a necessary corrective to any instinct to consider every cultural manifestation or societal trend as coming from God. At the same time, it respects God's creation as sacramental at its roots. This enables students to forgo confining sacramentality to prescribed liturgical events, and provides a broad invitation to sacramental living.

Finally, I find Tracy's emphasis on the theologian as a public figure, and theology as a public event enormously useful. Having taught worship for almost 40 years, and presided and* preached for an equal length of time, it is refreshing to reimagine worship beyond some private service to the baptized. Instead, our sacramentalizing broadcasts who we are and what we believe in this religiously skeptical world.

While Tracy focuses on systematic theology as public theology, the same should be said of worship. The 1963 Constitution on the Sacred Liturgy notes that the liturgy is the font and summit of the church's life. That means that it is the font of mission, of upholding the dignity of all human beings and the integrity of all of creation. If, as Pope Francis asserted in his Joy of the Gospel, every activity of the baptized is ultimately an act of evangelization, then our central acts of worship must by definition be acts of evangelization.

Tracy contends that systematic theologians must address society, academy and the church. Similarly liturgy as "public worship" must have the same centrifugal energy. This becomes increasingly important with the growing number of religiously unaffiliated in U.S. society. While their population continues to expand, they have not given up ritualizing. In times of personal loss, major life transition or natural or man-made disaster, human beings need to ritualize and often flock to our churches. Liturgy at such dynamic moments must have a capacity to transcend narrow doctrinal or rubrical parameters and speak to broad communities at such liminal moments. Analogical Imagination's presentation of theology as a public act amplifies and justifies such an approach. Traditionally liturgy has been called first (or first-order) theology. If all theology is to be a public act, then the first of our enacted theologies in word and sacrament, ritual and music must also be public.

*An earlier version of this story included third-person references to the author, due to an editorial error, as well as an incorrect word.

[Edward Foley is the Duns Scotus Professor of Spirituality and ordinary Professor of Liturgy and Music at Catholic Theological Union in Chicago. He is a member of the Province of St. Joseph of the Capuchin Order and was ordained a Roman Catholic priest in 1975.]