Take and Read: The Christian Faith 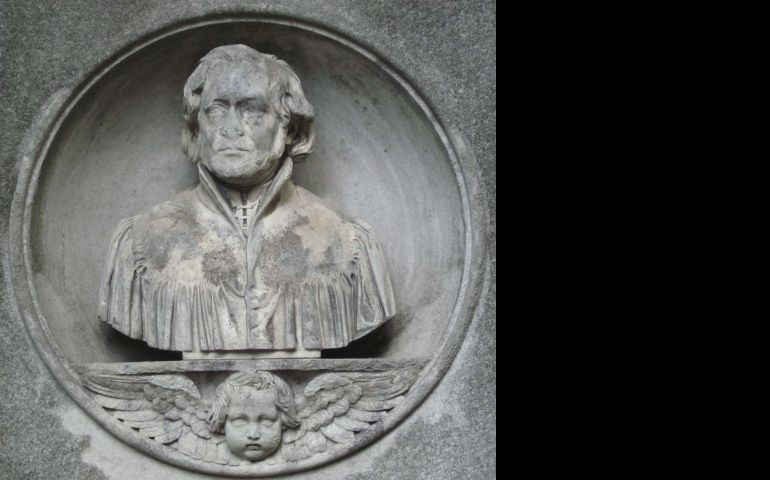 A bust of Friedrich Schleiermacher on his gravestone in Berlin (Wikimedia Commons/Beek100)
This article appears in the Take and Read feature series. View the full series.

Friedrich Schleiermacher (1768-1834) completed the first edition of his dogmatic synthesis, The Christian Faith, in 1820-21 and a revised version in 1830-31. It is one of those books that affected my conception of theology at a basic level.

I am not a Schleiermacher scholar; I have read him only in English translation. Specific interests have motivated my frequent returning to him. Narrative provides the best way show how Schleiermacher has shaped a Catholic theologian in ways that correspond with three areas of thought: religious epistemology, Christology and ecclesiology. In each case, I will note what led me to read Schleiermacher, what I learned from him, and what I take to be classic dimensions in his Christian theology.

I came to those courses having already read Tillich and Karl Rahner, and with a specific interest in fundamental questions such as religious knowing, the genesis and nature of doctrine, the grounds and methods of theology, and, from the perspective of Roman Catholicism of the time, the possibility within one church of a pluralism of theologies. I also had a missiological perspective and wanted to know how Christian doctrine could be inculturated in non-Western cultures.

For a graduate student immediately after the Second Vatican Council, Schleiermacher offered some promising paths. First of all, the turn to the subject as the place to begin understanding religion, faith and theology was congenial. This rather basic move provided an imaginative framework for understanding the structure and logic of the discipline of theology itself. I found deep and pertinent analogies between the structure of Rahner’s theology and what is going on in Schleiermacher. Those similarly schooled in Rahner did not read Schleiermacher’s analyses of the human subject psychologically, at least not in The Christian Faith, but as transcendental phenomenological analysis of the knowing subject.

This was attractive because one aspect of what was going on socially at the Second Vatican Council could be understood as a massive turn of a whole church to experience as, if not a source for reform, at least a catalyst for updating the church.

Schleiermacher’s distinction and linkage between self-consciousness, world-consciousness, and God-consciousness was also impressive. I brought with me a strong distinction between faith and knowledge, between the content of Christian affirmations, on one hand, and, on the other hand, what could be called knowledge of the things of this world.

Schleiermacher’s differentiations of different levels of a religious consciousness, while at the same time explaining the interacting influence that each has upon the other in a single conscious experience, allowed me to make distinctions that resolved some obvious problems. For example, the inseparability and mutual influence of world-consciousness and God-consciousness helps to mediate a deep historical consciousness and to explain pluralism in any community sharing common teachings and values.

From Schleiermacher, then, I accepted what has been called an experience-expression framework for understanding theology and doctrine. My allegiance to him, however, includes strong emphases on the receptivity of revelation and grace, and a realism of God’s initiative in the event of Jesus Christ and in Scripture.

In sum, I initially found that on questions of religious epistemology, doctrine and theology, Schleiermacher’s presentation of religious subjectivity as differentiated is classic; religious experience is structured in levels so that faith in God is always in dialogue with self and world. As a result, religious experience can be both a realistic consciousness, that is, open to and receptive of the real presence of divine influence, and pluralist and subject to change. Schleiermacher’s framework gives at least an initial explanation of the possibility of holding together unity and difference.

In sum, what I take to be classic in Schleiermacher’s Christology consists in a dynamically tensive understanding of Jesus Christ, one that holds together an existential consciousness Christology with a realist, ontological grounding.

He roots the ultimate explanation of Jesus’ exalted God-consciousness in the real presence and operation of God within him. The symbol of God as Spirit captures this. The economy of salvation thus consists in historical mediation of this God-consciousness to others. What Jesus mediates is God as Spirit as an effective presence and operation in human lives.

I was not deeply influenced or impressed by Schleiermacher’s ecclesiology until I had the occasion to focus my attention on it and compare it with other ecclesiologies from Christian history. Here, I will point to five characteristics of his understanding of the church that make sense today.

Where does the classic dimension of Schleiermacher’s ecclesiology lie? What is the overarching insight or perspective that characterizes his approach to the church and remains consistently generative?

I find it in what can be called a “whole-part” tension that characterizes the churches and the church. This combines a fruitful consciousness of being in a particular church or denomination and at the same time belonging to the wider whole church that includes other churches and ecclesiologies. The whole church is in each church; each particular church is but a part of the whole.

This means simultaneously recognizing invariant Christian institutions in variable forms, defining specific offices of ministry and recognizing others in other churches, taking the church with absolute seriousness, but one’s own church with relative seriousness because it is a part of the greater whole. Schleiermacher was one of the first to do this and few if any do it better than he.

I am tempted to conclude with an exclamation: “Schleiermacher lives.” But some might say, “That’s not Schleiermacher, but a creature of your own making.”

Such is the ambiguous nature of interpretation and appropriation. But whether or not this particular reconstruction has merit, I take it that all can agree that Schleiermacher continues to speak to current theological discussion and that he poses these three challenges:

[Jesuit Fr. Roger Haight is the author of Jesus Symbol of God. This essay was written 15 years ago as a presentation at the American Academy of Religion.]

For a Black Jesuit in the US, racism is a crucible