Skip to main content
News
Spirituality
This story appears in the Take and Read feature series. View the full series. 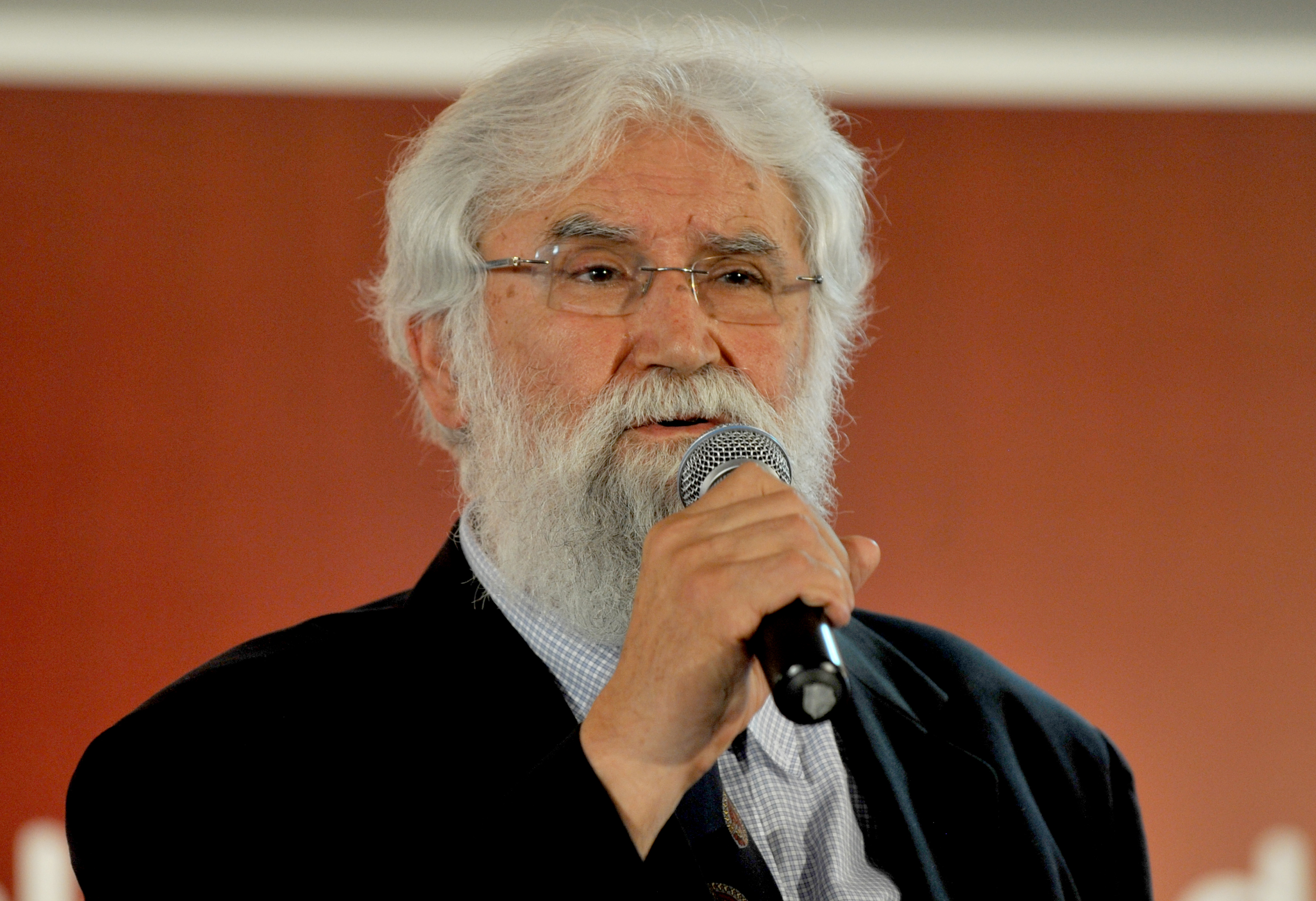 Cry of the Earth, Cry of the Poor
by Leonardo Boff
Orbis Books, 1997

Leonardo Boff’s Cry of the Earth, Cry of the Poor appeared in English in 1997. It defined what are now primary pillars of Catholic ecotheology and environmental ethics -- justice for the poor and justice for the Earth. It followed the first United Nations Stockholm conference on the environment (1972), and the Rio Earth Summit (1992), which first conceptualized “sustainable development.” Already, a corpus of Catholic social teaching on ecological ethics was emerging from Catholic bishops’ conferences and Pope John Paul II’s 1990 World Day of Peace address.

Those that cry out

But significantly, Boff’s work also bears the marks of a pastor among the poor. Boff holds:

Liberation theology and ecological discourse have something in common: they start from two bleeding wounds. The wound of poverty breaks the social fabric of millions and millions of poor people around the world. The other wound, systematic assault on the Earth, breaks down the balance of the planet, which is under threat from the plundering of development as practiced by contemporary global societies. Both lines of reflection and practice have as their starting point a cry: the cry of the poor for life, freedom, and beauty … and the cry of the Earth groaning under oppression.

The same logic drives dominant populations to oppress the marginalized and plunder the Earth. A strong interconnection binds the ecological, human, social and spiritual aspects of life. Boff argues that this evil has deep roots in the spiritual malaise that characterizes socialism and capitalism.

Boff was born in Concordia, Santa Catarina, Brazil, in 1938. His father was a schoolteacher who identified with the poor blacks in Concordia. Leonardo was ordained a Franciscan priest in 1964. He studied theology at the University of Munich, was Karl Rahner’s research assistant, and Joseph Ratzinger directed his dissertation.

For 22 years, Boff was a professor at the Franciscan Institute at Petrópolis in Brazil, becoming an internationally renowned liberationist. After painful censure by Rome, Boff resigned from the priesthood and the Franciscan order in 1992, but he did not abandon Franciscan theology and spirituality.

Like other transformative figures, he saw connections other missed. He articulated the radical theological and ethical linkages between ecology, poverty, spirituality, and systemic violence against all creation -- including humans -- in terms consistent with modern realities. His detractors failed to distinguish basic terms (pantheism/panentheism; Marxist analysis/Stalinist communism; Bonaventure's Trinity/Aquinas' Trinity).

Two life-changing experiences led Boff to embrace ecojustice and social justice within liberation theology. First, as pastor in a slum of Petrópolis, near Rio de Janeiro, he encountered people forced to scavenge for food in garbage dumps, but who drew hope and self-worth from their base Christian communities.

In the lush Amazon jungles of the Acre-Purus diocese, Boff saw the raping of the Amazon rainforests by developers that threatened people’s very survival. There, faith and life, God and suffering, all were one.

Boff insists that the poor must be "the point from which one attempts to conceive of God, Christ, grace, history, the mission of the churches, the meaning of the economy, politics, and the future of societies and of the human being." Concern for the poor provokes concern for the whole of creation, precisely because the poor are the most harmed by both capitalist and socialist abuses of the Earth.

Cry of the Earth, Cry of the Poor begins with an in-depth analysis of the human-wrought ecological illnesses of Earth. Influenced by Jan Smuts, Boff then articulates a holistic ecological model. Using the “new physics”; evolutionary biology; environmental science; and Augustinian, Bonaventuran, Pascalian and existentialist traditions, Boff calls for merging ecological and theological concerns.

Boff finds theological warrants for protecting the poor and the Earth in Christian panentheism (“everything in God, God in everything”), the sacramentality of creation, and a doctrine of the Holy Spirit (“God’s absolute passion, absolute love”). This all supports an ecology-based cosmology, rooted in evolutionary processes, and a definition of sin as “breaking connectedness.”

Further, the liberation vision of the just society is modeled after the social relations of the persons of the Trinity, following the Cappadocian and Victorine traditions. Fulfillment of this vision requires spiritual conversion.

Boff offers living "cardinal ecological virtues," as exemplified by St. Francis of Assisi, as the pathway forward. Prayer was St. Francis' entrée to his self-understanding as an ontological poet-mystic, able to grasp the sacramentality of all things. He reveled in religious erotic enchantment, wonder, fascination, and desire for and with all things in the universe (love). Francis’s radically related God compels humanity to care for their kin in all creation as God cares for them (obedience). Francis experienced his own dignity bound up with all creation insofar as everything originates in One Creator (humility). From this stance, Francis encountered all relationships as one utterly available to the need of others (poverty).

Through penance, poverty and prayer, Francis lived securely and passionately, grounded in his relationship with God and all creation -- especially the poor.

Leonardo Boff's Cry of the Earth, Cry of the Poor changed my life by strengthening my insights and convictions about self-identity as a person, a Christian, a life-committed Franciscan, and a theological ethicist. Often my worldview is contra la corriente, larger than most of my peers.

I first read this book in 1997 during a retreat marking the 25th anniversary of my profession of faith as a Catholic, the 20th year since entering the Franciscan novitiate, the 13th year as a life-professed Franciscan sister, and the third year as a theological ethicist, having completed a doctorate in 1995 at Marquette University.

Like Boff, my work utilized the models, metaphors and perspectives available to theology from the “new physics,” Franciscan sources, and social analysis done “from below.” I immediately identified with Boff intellectually, and I found synergy with his passion for justice.

I was gifted with wise, well-educated, committed Lutheran parents who modeled a profound respect for the dignity of each person and who delighted in the wonders of creation. My mother was a teacher, and later a proofreader for the local weekly. She delighted in her large garden and prize-winning hybrid roses. Family camping trips were settings for interdisciplinary lessons in theology and natural sciences. In that atmosphere, I was seduced, heart and mind, into a profound awareness of the compassionate Presence -- God.

But I rejected the sin-centric theology of the Missouri Synod Lutheran tradition. As a “seeker,” I discovered Catholicism through a Franciscan lens -- a compassionate approach to sin, forgiveness, “baptism of desire,” the “call and response” to God, and agapistic virtue ethics.

Providentially, I received a scholarship to a Franciscan women’s college. There, I read theology and the social sciences with Franciscan educators using an integrative approach.

With a bachelor’s degree in social work and psychology, I joined the Volunteers in Diocesan Action program in Pueblo, Colo. As a community organizer/youth minister among newly immigrated Mexicans, I learned firsthand about the lethal combination of war, poverty, ecological destruction, racial prejudice, and the blind, unyielding power of the white, wealthy majority.

Retuning to Minnesota, I became the chief of group living in a psychiatric hospital for abused and neglected children. With Mayo Clinic psychiatrists, we strove to heal the wounds inflicted by parents, who themselves were so injured. There, I frequently witnessed grace-filled moments when the beauty and wonder of the hospital’s small forest soothed wounded children.

As a Franciscan sister, I earned a master’s degree in religious studies at Maryknoll School of Theology, 1981-85. My teachers were the “Who’s Who” of the liberation theologies of the day -- including Boff. Spring term of 1985, I was in war-torn, Sandinista-ruled Nicaragua with Maryknoll sisters; then with Penny Lernoux and Franciscans in Colombian “peace communities” threatened by drug lords.

Later, as a field organizer for NETWORK, the Catholic social justice lobby based in Washington, D.C., I frequently entered the halls of Congress. Experiencing the palpable power present there was like facing the mouth of a dragon. One could not predict when it would spit fire or simply purr. I saw that raw power, used for both harming and helping the poor.

Then, as education consultant for the Division of Social Ministry in the diocese of Rochester, N.Y., my work with Bishop Matthew Clark focused on drafting his pastoral letter on HIV/AIDS and then implementing an action plan in the diocese. Many encouraged me to study for the doctorate -- and the rest is history!

The wisdom of Boff's inspired liberation theology -- where ecology and theology are partners, not rivals -- confirmed truths I learned among the poor and my immersion in Franciscan spirituality and theology. These moved, shaped, motivated and impassioned me with a kind of sacred energy still palpable today.

The intense awareness of our incarnational God, the awesome humility of God in Christ, the image of God as overflowing fountain fullness (Bonaventure), the penetrating particularity amid wildly creative diversity of the panentheistic expression of God in the material world (haecceitas, Duns Scotus) -- all found their home delightfully within every fiber of my being.

Certainly, the virtues lived by St. Clare and St. Francis of Assisi, now knowable through models of the "new physics," outline a theological framework and moral vision that, deep in my bones, I know can transform human hearts -- the world.

My life and Boff's influences have crossed paths again. His work was integrated into Pope Francis’s encyclical "Laudato Si', on Care for Our Common Home." It has been my pleasure to be able to do a variety of presentations on the document in numerous venues, and to serve as an ethics consultant on several committees supporting Archbishop Blaise Cupich’s efforts to fully implement the encyclical in the Chicago archdiocese. Indeed -- "The Lord hears the cry of the poor. Blessed be the Lord!"