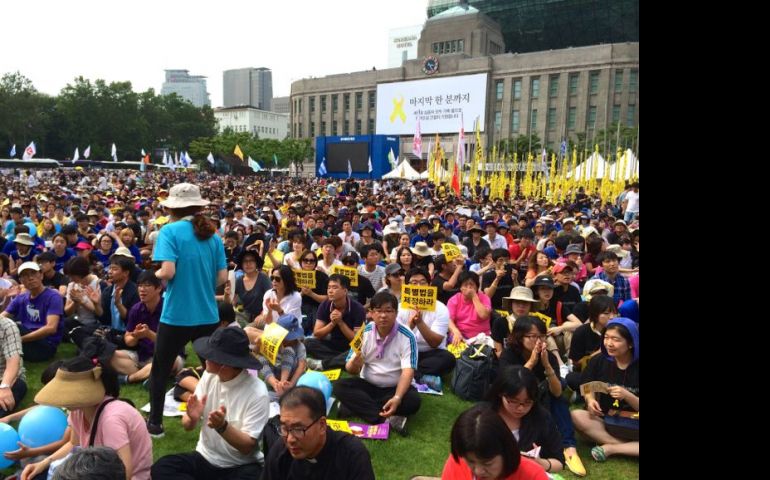 SEOUL, SOUTH KOREA  --- Tens of thousands of Koreans descended this afternoon on a plaza adjacent to the downtown City Hall here to listen to music and speeches demanding an independent investigation into the April 16th Sewol ferryboat disaster that took the lives of 306 Koreans, most of them teens.

They sat for several hours under a hot sun with victim family members sitting in the front rows.

The packed plaza was surrounded by tents, some featuring art memorializing the disaster, others, allowing Koreans, young and old, to inscribe messages on thin yellow ribbons, which then adorned makeshift shrines.

Hundreds of police sat on the edges of the plaza watching, but did not interfer with the procedings.

Following the rally, the crowd, shouting through megaphones, marched through downtown Seoul streets in lines that extended for a half mile or more.

Meanwhile, Pope Francis was in Deajeon, South Korean, also focusing on the lives of young Koreans, many the same age as those who perished in this national disaster.

An attorney representing ferry family victims, Pil Kyu Hwang, told NCR that Pope Francis met with and hugged ten family members before he celebrated a morning mass on this feast of the Assumption.

According to Hwang, the family members delivered gifts to Francis.

One letter was personal and written by family members; a second came from students who survived the ferry sinking; a third was written by family members whose children are still missing, and a fourth was a joint appeal to Francis to call for the legislation they want passed by the South Korean government to authorize an official independent investigation and to authorize prosecution for those found culpable.

Hwang said the family members also gave gifts to Francis, including a yellow ribbon that has become the symbol of support for those lost in the ferry sinking. Hwang said the pope wore the ribbon during the mass he celebrated today.

The family members also gave Francis a photo album with photos of all those who died in the Aug. 16th disaster.

Finally, those family members who met with Francis, Hwang said, delivered to him two urgent messages. The first was a call that he support their calls for an independent investigation; the second was that Francis meet personally with the Kim Young-oh, the father of 17-year-old, Kim Yoo-min, who died in the ferry sinking.  Kim is in the 33rd day of a fast protesting the government’s failure to investigate the incident.