Tense drama 'The Salesman' examines fallout between spouses, after trauma 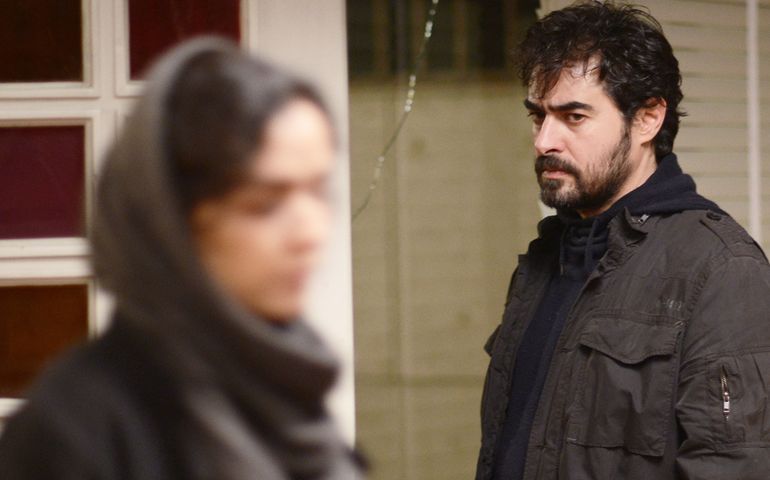 In Iranian director/writer Asghar Farhadi's new film "The Salesman" Emad (Shahab Hosseini) teaches literature to high school boys during the day and acts with his wife Rana (Taraneh Alidoosti) at night in a small theater. Their current play is Arthur Miller's "Death of a Salesman." The couple has recently lost their home after the apartment building became unstable when, without warning, the owners begin to demolish it with people still in it. Cracks appear and people run. A friend at the theater rents the couple another apartment where a prostitute once lived with her son.

One evening Rana releases the lock on the door thinking it is her husband. Instead it is a former client of the prostitute who attacks Rana. He flees on foot when she screams, leaving his truck behind in the garage. Emad determines not to call the police and to find the man who hurt his wife using the truck as his main clue.

"The Salesman" is a tense drama that becomes more about the emotional fallout on the relationship between the spouses and how intimate, domestic communication, a frequent theme for Farhadi — and a theme in the play — suffers. But it is how Emad deals with the guilt that he feels for not protecting his wife that leads to revenge and vengeance and the realization that in the face of this crisis this husband and wife do not really know each other at all.

At the press day for the film Farhadi shared some insights on the couple and Emad's race toward vengeance. He said that, to him, "women are on the whole more forgiving because women bear children and their gaze is pointed more toward the future. Men are more rooted and look behind more." Here the woman speaks from her point of view and tells Emad that she is the one who has undergone harm and she wants to have a part in the judgment of the perpetrator who turns out to be an aging man. He has invaded their private space and attacked their honor. Rana is upset at her husband who wants to be as violent as the old man and do harm. Rana does not want to force Emad to forgive her attacker; she is upset that his method to seek justice is not moral. Rana's beliefs utterly confuse Emad because they challenge who he is as a man and husband.

Farhadi said that Arthur Miller's "Death of a Salesman" is very popular in Iran; it is performed once or twice a year, and he uses the play as a kind of inner frame of reference for the film. He explained that the play's main character, Willy Loman, ultimately commits suicide because he suffers from humiliation; he feels useless, like a nobody. The old man and his wife in the film are the Iranian version of Willy Loman and his wife. The old man, like Willy, is growing old and feeling as if no one will miss him. In the scene where the two couples confront one another anger and degrees of mercy clash. The audience senses that the couple longs for their old building and the life they had, but that, like the building, is full of cracks.

"The Salesman" is Iran's official Oscar entry for Best Foreign Language Film this year and was nominated for a Golden Globe. The film was partially produced by Amazon. If you enjoy world cinema that often highlights human reality in singular and insightful ways, "The Salesman" is worth the watch.

Hope and peacemaking begin in mourning