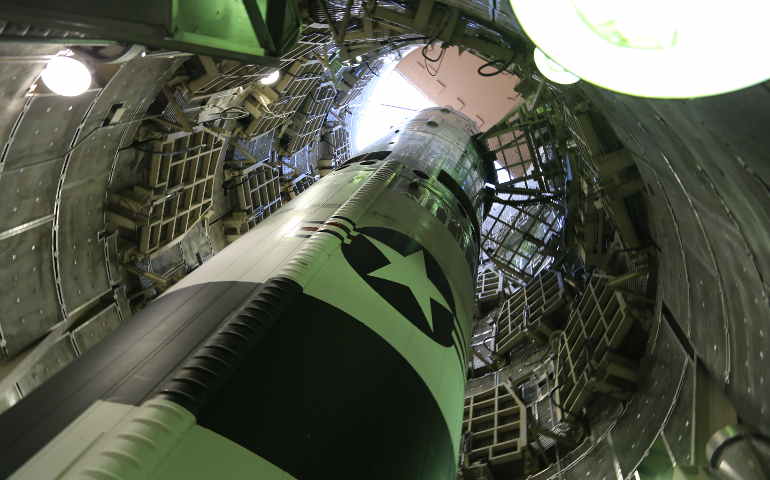 You read in this space yesterday that Pax Christi International is inviting Catholics to sign a letter to president-elect Donald Trump in support of the abolition of nuclear weapons. (Here are details.)

This follows pre-Christmas tweets and comments by Trump in which the president-elect welcomes an arms race in nuclear weapons. On Dec. 22, the Thursday before Christmas, Trump tweeted that the United States "must greatly strengthen and expand its nuclear capability until such time as the world comes to its senses regarding nukes."

The next day Reuters news agency reported on telephone conversation between MSNBC TV host Mika Brzezinski and Trump. "Let it be an arms race,” Trump told Brzezinksi according to the Reuters report. “We will outmatch them at every pass and outlast them all."

Trump's statements contradict more than 30 years of U.S. policy geared to reducing the number of nuclear weapons in the world’s arsenals and ignore recent trends in international nonproliferation efforts.

Our one hope is that united action by groups like Pax Christi can stall efforts to jumpstart a race in nuclear weapons. Millions marched against nuclear weapons in the 1980s. Similar efforts are needed today.

The irony of nuclear arsenals is that they don’t really make the holders safer. Eric Schlosser writing in Command and Control: Nuclear Weapons, the Damascus Accident, and the Illusion of Safety (selected as one of The New York Times' "most notable books" of 2013) makes this abundantly clear.

Nuclear weapons are, Schlosser writes, “a collective death wish, barely suppressed. Every one of them is an accident waiting to happen, a potential act of mass murder. They are out there, waiting, soulless and mechanical, sustained by our denial -- and they work.” Read Chris Herlinger’s review of the book for NCR.

Over more than 600 pages, Schlosser catalogues the dangers of just having nuclear weapons: accidents in planes, on runways and in missile silos that almost became nuclear diasters, misinterpreted data and just plan mistakes that almost caused nuclear wars, tales of mismanagement, neglect and bureaucratic stupor that put people, towns and nations at risk since the bomb’s development in 1945.

The PBS documentary program American Experience will air tonight (check local listings for schedules) at 9 p.m. eastern time “Command and Control,” a documentary by Robert Kenner based on Schlosser’s book.

Rolling Stone said, “Robert Kenner’s documentary, based on Eric Schlosser’s terrifying book of the same name, combines Cold War-era thriller with post-apocalyptic nightmare. And given it’s all true, this one will stay with you for days after viewing.”

The New York Times said, the documentary “profiles a deadly machine of war gone awry. The film relives the feverish struggle to prevent a nuclear blast from the nation’s most powerful warhead. It’s a mix of documentary footage and vivid recreations."

According to the Los Angeles Times, “Lots of documentaries these days will tell you to be afraid, very afraid, but few will scare you as coolly and convincingly as Command and Control."

I call it must viewing for anyone concerned about the future of the planet.