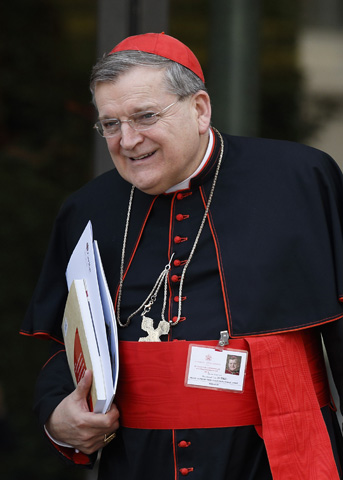 U.S. Cardinal Raymond Burke leaves the Oct. 7 morning session of the extraordinary Synod of Bishops on the family at the Vatican. (CNS/Paul Haring)

Update: In a brief interview with NCR Saturday at the Vatican, U.S. Cardinal Raymond Burke confirmed that he has been told he will be removed as the chief justice of the Vatican's Supreme Court. Asked who had told him he would be removed, Burke replied: "Who do you think?" The original blog follows.

From Friday: U.S. Cardinal Raymond Burke, a former archbishop of St. Louis known for his rigorist interpretations of Catholic doctrine, has reportedly confirmed rumors that Pope Francis is planning to remove him from his influential post as the chief justice of the Vatican's Supreme Court.

Burke is reported to confirm the rumors, which have attracted attention in recent weeks as a sign that Francis may be preparing a tonal shift at the Vatican, in a piece Friday by BuzzFeed News.

“I very much have enjoyed and have been happy to give this service, so it is a disappointment to leave it,” Burke is reported to say in the piece, which goes on to say that the cardinal is yet to receive formal notice of his removal.

The rumors in recent weeks have speculated that Burke, currently the prefect of the Vatican's Supreme Tribunal of the Apostolic Signatura, would be moved to the largely ceremonial post of patron to the Sovereign Military Order of Malta.

"In the church as priests, we always have to be ready to accept whatever assignment we’re given," Burke is reported to say in the BuzzFeed piece. "And so I trust by accepting this assignment I trust that God will bless me, and that’s what’s in the end most important.”

Burke, who took up the Vatican role in 2008, has made news frequently in recent days voicing disapproval with the direction of a worldwide meeting of Catholic bishops, known as a synod, taking place at the Vatican from Oct. 5-19.

He has voiced staunch disapproval in particular to a landmark document released by the synod on Monday, which called on the church to listen more widely to people's concerns and to apply mercy more generously.

Burke has said in interviews that the document was "not of the church" and that Francis should issue a clarification reaffirming traditional Catholic doctrines.

The Apostolic Signatura is the Vatican's highest court and is widely responsible for ensuring the proper administration of justice in the Catholic church. The Knights of Malta is a lay religious order that seeks to aid people in need around the world.

Burke also previously served as the bishop of La Crosse, Wis. A native of that state, he has been known through the years for his staunch conservative positions. In one instance in 2009, he called on U.S. bishops from his position at the Vatican to withhold Communion from pro-choice Catholic politicians.

Francis previously removed Burke in December from an influential position as a member of the Vatican's Congregation for Bishops, the Vatican office responsible for advising the pontiff on bishop appointments around the world.

NCR will update this story as more information is made available.