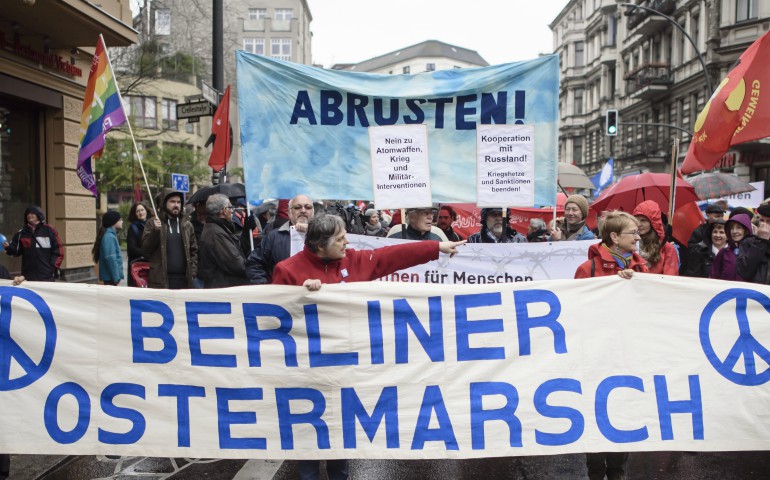 A group marching for nuclear disarmament carries a banner during a protest in mid-April in Berlin. (CNS photo/Clemens Bilan, EPA)

The U.S. Conference of Catholic Bishops issued the following statement today. For more on the nuclear disarmament conference at the United Nations, see: A vote to ban nuclear weapons is a vote for Earth's future

WASHINGTON — A joint declaration issued today by U.S. and European Catholic bishops calls for all nations to work together to develop a "credible, verifiable and enforceable strategy for the total elimination of nuclear weapons."

Entitled "Nuclear Disarmament: Seeking Human Security," the declaration was issued to coincide with the conclusion of a meeting hosted this week by the United Nations "to negotiate a legally binding treaty to prohibit nuclear weapons, leading towards their total elimination." Although the United States and most European nations are not joining these negotiations, the Catholic bishops acknowledge, "[t]he fact that most of the world’s nations are participating in this effort testifies to the urgency of their concern, an urgency intensified by the prospect of nuclear terrorism and proliferation, and to the inequality and dissatisfaction of non-nuclear states about the lack of progress in nuclear disarmament efforts."

Recognizing the need for national and international security, the bishops of the United States and Europe implore the leaders of their nations to work with other countries to promote peace through nuclear disarmament. "The indiscriminate and disproportionate nature of nuclear weapons, compel the world to move beyond nuclear deterrence," the declaration reads. "We call upon the United States and European nations to work with other nations to map out a credible, verifiable and enforceable strategy for the total elimination of nuclear weapons."

"The teaching of our Church — from the Catechism to Saint Pope John Paul II and Pope Francis —about the urgent need for nuclear disarmament is clear," said Bishop Oscar Cantú of Las Cruces, New Mexico, chairman of the USCCB Committee on International Justice and Peace.  "It is time for us to heed this moral imperative and promote human security both within the United States and Europe, and globally."

The declaration is signed by Bishop Cantú and Archbishop Jean-Claude Hollerich, President of European Justice and Peace Commissions.

The full text of the joint declaration is available at on the U.S. bishops' website or as a pdf.