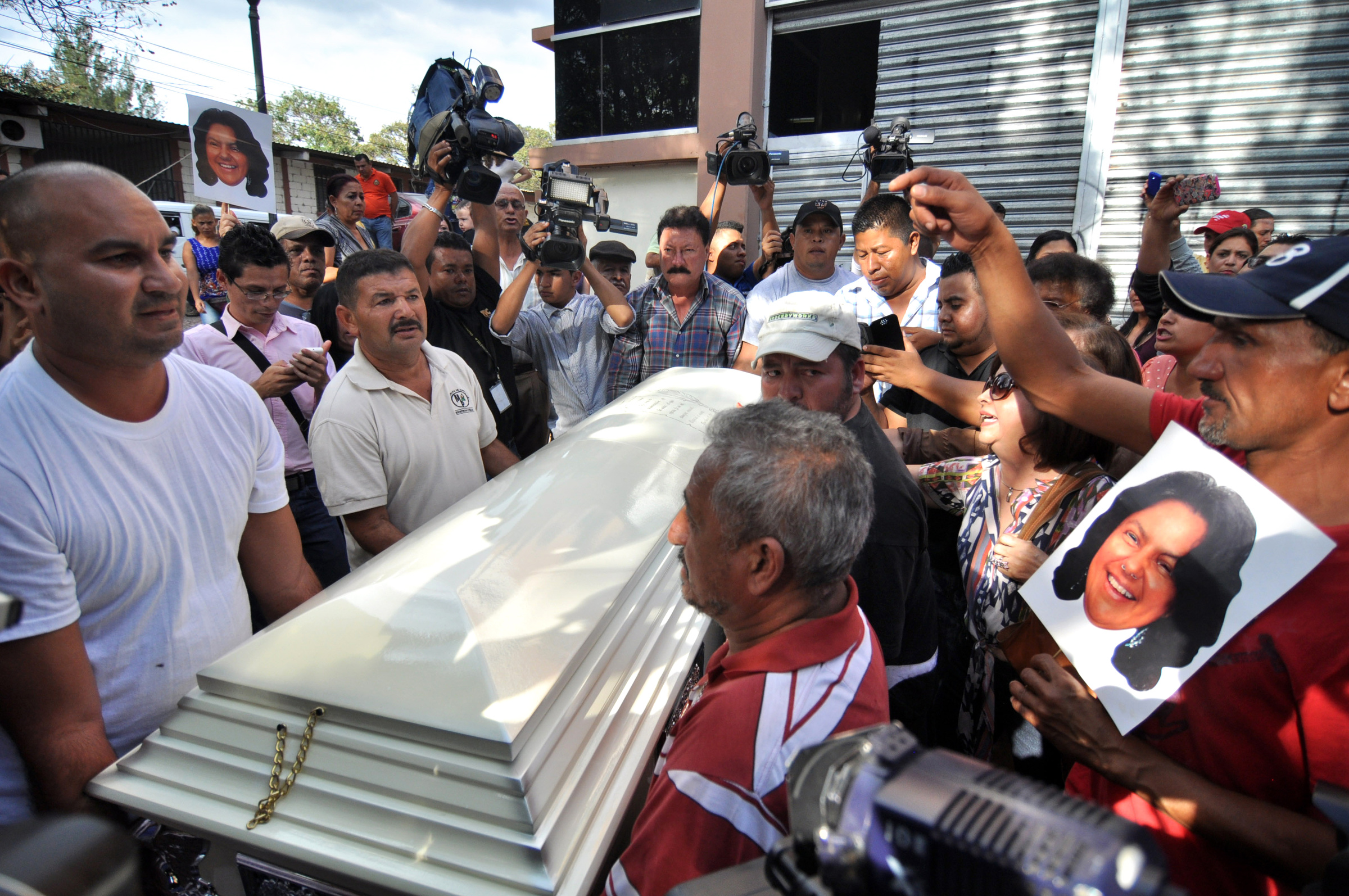 People carry the coffin of indigenous leader and environmental activist Berta Caceres after a five-hour autopsy at the Forensic Medicine Center in Tegucigalpa, Honduras, March 3. (CNS/EPA/Stringer)

On March 3, Berta Cáceres, a brave and outspoken indigenous Honduran environmental activist and winner of the Goldman Environmental Prize, was gunned down in her hometown of La Esperanza. Erika Guevara-Rosas, Americas director for Amnesty International, noted how "For years, she had been the victim of a sustained campaign of harassment and threats to stop her from defending the rights of indigenous communities."

Despite being a wealthy logger and rancher from the centrist Liberal Party, Zelaya had moved his government to the left during his four years in office. During his tenure, he raised the minimum wage and provided free school lunches, milk for young children, pensions for the elderly, and additional scholarships for students. He built new schools, subsidized public transportation, and even distributed energy-saving light bulbs.

None of these were particularly radical moves, but it was nevertheless disturbing to the country’s wealthy economic and military elites. More frightening was that Zelaya had sought to organize an assembly to replace the 1982 constitution written during the waning days of the U.S.-backed military dictator Policarpo Paz Garcia. A non-binding referendum on whether such a constitutional assembly should take place was scheduled the day of the coup, but was cancelled when the military seized power and named Congressional Speaker Roberto Micheletti as president.

Calling for such a referendum is perfectly legal under Article 5 of the 2006 Honduran Civil Participation Act, which allows public functionaries to perform such non-binding public consultations regarding policy measures. Despite claims by the rightist junta and its supporters, Zelaya was not trying to extend his term. That question wasn’t even on the ballot. The Constitutional Assembly would not have likely completed its work before his term had expired anyway.

The leader of the coup, Honduran General Romeo Vásquez Velásquez, was a graduate of the notorious School of the Americas, a U.S. Army training program nicknamed “School of Assassins” for the sizable number of graduates who have engaged in coups, as well as the torture and murder of political opponents. The training of coup plotters at the program, since renamed the Western Hemisphere Institute for Security Cooperation, isn’t a bygone feature of the Cold War: General Luis Javier Prince Suazo, who played an important role in the coup as head of the Honduran Air Force, graduated as recently as 1996.

There is no evidence to suggest that the Obama administration was behind the coup. However, a number of U.S. officials -- most notably then-Secretary of State Hillary Clinton -- played an important role in preventing Zelaya’s return to office and the junta consolidating its power in the face of massive nonviolent protests.

Clinton insisted the day after the coup that "all parties have a responsibility to address the underlying problems that led to yesterday’s events." When asked if her call for "restoring the constitutional order" in Honduras meant returning Zelaya himself, she didn’t say it necessarily would. State Department spokesperson Ian Kelly evaded reporters' questions as to whether the United States supported Zelaya's return, placing the United States at odds with the Organization of American States, the Rio Group, and the U.N. General Assembly, all of which called for the "immediate and unconditional return" of Zelaya.

U.S. Ambassador to Honduras Hugo Llorens, reflecting the broad consensus of international observers, sent a cable to Clinton entitled "Open and Shut: The Case of the Honduran Coup," thoroughly documenting that "there is no doubt" that Zelaya’s ouster "constituted an illegal and unconstitutional coup." Similarly, Ann-Marie Slaughter, then serving as director of Policy Planning at the State Department, sent an email to Clinton strongly encouraging her to "take bold action" and to "find that [the] coup was a 'military coup' under U.S. law." However, Clinton's State Department refused to suspend U.S. aid to Honduras -- as required when a democratically-elected government is ousted in such a manner -- on the grounds that it wasn’t clear that the forcible military-led overthrow actually constituted a coup d'état.

Emails released last year by the State Department also show how Clinton rejected calls by the international community to condemn the coup and used her lobbyist friend Lanny Davis -- who was working for the Honduran chapter of the Business Council of Latin America, which supported the coup -- to open communications with Micheletti, the illegitimate interim ruler installed by the military.

Leaders of Latin American nations, the U.N. General Assembly and other international organizations unambiguously demanded Zelaya’s immediate return to office. However, in her memoir Hard Choices, Clinton admits that she worked to prevent restoring the elected president to office: “In the subsequent days [after the coup] I spoke with my counterparts around the hemisphere, including Secretary Espinosa in Mexico. We strategized on a plan to restore order in Honduras and ensure that free and fair elections could be held quickly and legitimately, which would render the question of Zelaya moot.”

The elections, held under military rule and marred by violence and media censorship, were hardly free or fair. The Union of South American Nations (UNASUR) declared they would not recognize elections held under the de facto government and the Organization of American States drafted a resolution that would have refused to recognize Honduran elections carried out under the dictatorship, but the State Department blocked its adoption.

In the subsequent six years, the horrific repression and skyrocketing murder rate -- now the highest in the world -- has resulted in tens of thousands of refugees fleeing for safety in the United States. Ironically, as Secretary of State, Clinton rejected granting political asylum and supported their deportation.

Clinton’s role in supporting the coup in Honduras is a reminder that the Middle East is not the only part of the world in which she is willing to set aside principles of international law and human rights to advance perceived U.S. economic and strategic interests. Indeed, it may be a troubling indication of the kind of foreign policies she would pursue as president.