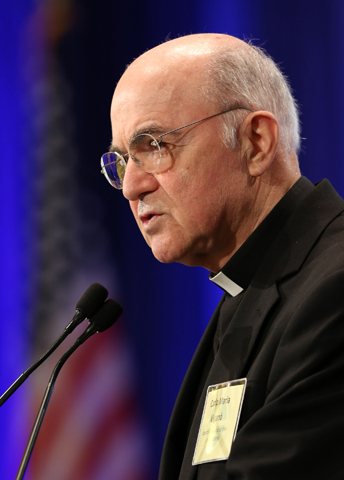 The Vatican’s ambassador to the United States has encouraged American seminarians studying in Rome to be “courageous in always defending the freedom to put our Catholic faith into practice without fear.”

Italian Archbishop Carlo Viganò, who has attracted controversy for reportedly arranging Pope Francis’ meeting with Kentucky county clerk Kim Davis and for publicly demonstrating against same-sex marriage, told the seminarians that the past several years of their country’s history “have been very challenging for the church in America.”

Viganò, who has represented the Vatican in Washington since 2011 as the pope’s apostolic nuncio, was speaking Thursday after being honored at a posh banquet dinner at the U.S. bishops’ seminary in Rome.

Mentioning Francis’ U.S. visit last fall, the archbishop said that it was very significant for him that the pontiff began his historic address to a joint meeting of the U.S. Congress by describing America with the words of the National Anthem: “The land of the free and the home of the brave.”

“Perhaps more than ever, this phrase should be something we continue to live for and pray for,” said Viganò.

“That the United States of America will protect our freedom, especially our religious liberty, as well as respect the human right to conscientious objection, and that we will be courageous in always defending the freedom to put our Catholic faith into practice without fear,” he continued.

“Each one of us has a responsibility before God to bring a message of truth into this world, even if it means spending our lives for that very purpose -- sometimes silently, but very often today publicly,” said Viganò.

“This is an age when we need great courage -- courage to stand up for the truth, even when we are not understood, or persecuted when we are understood,” he said. “We need to be strong in the face of evil.”

Viganò was speaking Thursday after being honored at the annual Rector’s Dinner of the Pontifical North American College, which is owned by the U.S. Conference of Catholic Bishops and trains and forms many seminarians and priests from dioceses across the U.S., Canada and Australia.

The nuncio was lauded at the $450-a-plate dinner alongside California lawyer Timothy Busch, who specializes in “high net-worth estate planning” and is also co-founder of the Napa Institute, which focuses on defending Catholic principles in the public arena.

During his brief address accepting his honoring, Viganò expressed “deep gratitude” to Busch and his wife, saying he was “appreciating all that they have done to enhance the life and growth of the American church, from their native California and all across the United States, as well as the Holy See itself.”

The archbishop also said that the Rome seminary “teaches us how to be strong, to be virtuous, to be valiant witnesses to the message of Jesus: ‘The Truth will make you free.’”

“This is the great mission entrusted to the North American College,” he said.

Viganò​, who reached the usual retirement age for bishops of 75 in January, is expected to retire from his current role soon. Some have asked whether he might have been involved in making time in Francis' schedule during the pope's September U.S. visit to meet Davis, who has refused to issue same-sex marriage licenses.

The archbishop also attracted controversy in early 2015 when he took part in the March for Marriage, a public demonstration in Washington against same-sex marriage. Some critics said it was inappropriate for a church diplomat to attend an event meant to influence policy in the country of his posting.