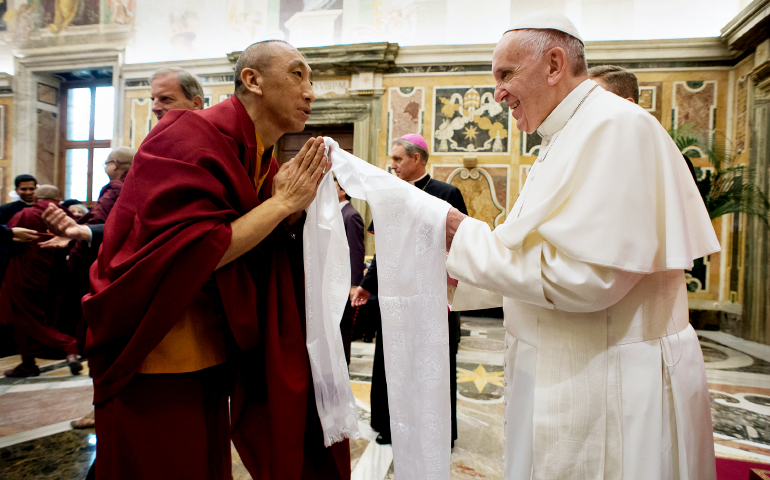 Pope Francis greets a Buddhist monk during a Nov. 3, 2016, audience with religious leaders at the Vatican. (CNS/L'Osservatore Romano)

The Vatican has called on Catholics and Buddhists to work together to teach wider society the value of a nonviolent lifestyle, saying in a letter for an upcoming Buddhist holiday that the founders of the two faiths were alike in their promotion of peacemaking.

“Jesus Christ and the Buddha were promoters of nonviolence as well as peacemakers,” the Pontifical Council for Inter-religious Dialogue writes in a letter issued Saturday for the upcoming Buddhist holiday of Vesakh.

“Though we recognize the uniqueness of our two religions, to which we remain committed, we agree that violence comes forth from the human heart, and that personal evils lead to structural evils,” the letter continues. “We are therefore called to a common enterprise.”

Vesakh, celebrated by most Buddhists this year on May 10, commemorates the birth, enlightenment and death of Buddha.

The Vatican letter, addressed to “Buddhist friends,” is titled: “Christians and Buddhists: Walking Together on the Path of Nonviolence.” It is signed by Cardinal Jean-Louis Tauran and Bishop Miguel Ángel Ayuso Guixot, the two leaders of the pontifical council.

Quoting from Francis’ message for the 2017 World Day of Peace, the council states in the letter that Jesus “marked out the path of nonviolence.”

“He walked that path to the very end, to the cross, whereby he became our peace and put an end to hostility,” the letter continues.

The letter then quotes from the Buddhist Dhammapada, saying Buddha “also heralded a message of nonviolence and peace.”

The letter ends with a call for Buddhists and Catholics to work together on nearly a dozen areas, including: “to study the causes of violence: to teach our respective followers to combat evil within their hearts; to liberate both victims and perpetrators of violence from evil; to bring evil to light and challenge those who foment violence; [and] to form the hearts and minds of all, especially of children, to love and live in peace with everyone and with the environment.”

Francis has put a special emphasis on disarmament, peacemaking, and Jesus’ teachings of nonviolence during his papacy.

In his World Day of Peace message he called on Christians to emulate Jesus way of acting nonviolently. In a March letter to the U.N. during talks on eliminating nuclear weapons, the pope said it is time for the international community to “go beyond” nuclear deterrence.