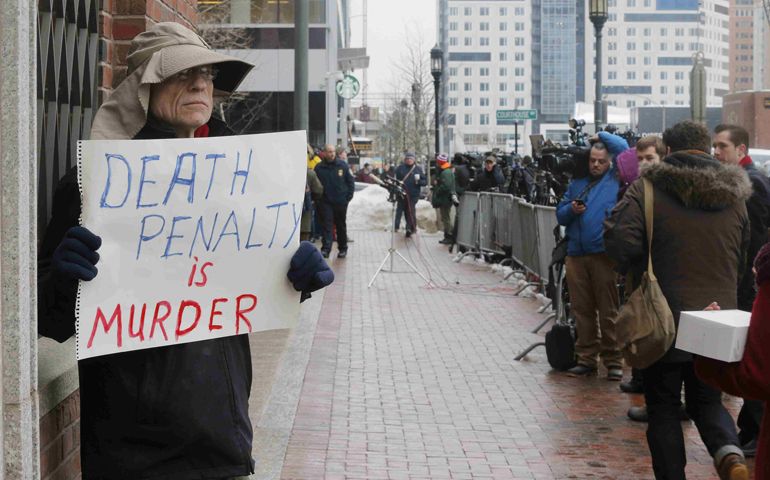 A man protests against the death penalty outside the trial of accused Boston Marathon bomber Dzhokhar Tsarnaev on March 4 in Boston. (CNS/Reuters/Brian Snyder)

Rome — The Vatican's permanent observer to the United Nations in Geneva has strongly endorsed global efforts to abolish the death penalty, saying the Holy See "fully supports" those efforts.

Speaking at a meeting of the UN's Human Rights Council last week, Archbishop Silvano Tomasi left little doubt about the Vatican's stance on the matter.

"My delegation contends that bloodless means of defending the common good and upholding justice are possible, and calls on States to adapt their penal system to demonstrate their adhesion to a more humane form of punishment," Tomasi said.

"The Holy See Delegation fully supports the efforts to abolish the use of the death penalty," he continued.

Tomasi, who has represented the Vatican in Geneva since 2003, was making his remarks at the Council's session on March 4. The Vatican released the text of his remarks Thursday.

While Catholic teaching holds that the death penalty can be used in a situation where the public authority can find no other way to contain a dangerous person, the last several popes have said that such situations likely no longer exist.

Tomasi quoted both Pope John Paul II and Francis in his remarks on the matter.

Citing John Paul II's 1995 encyclical Evangelium Vitae, the archbishop states: "Considering the practical circumstances found in most States ... it appears evident nowadays that means other than the death penalty 'are sufficient to defend human lives against an aggressor and to protect public order and the safety of persons.'"

"Political and legislative initiatives being promoted in a growing number of countries to eliminate the death penalty and to continue the substantive progress made in conforming penal law both to the human dignity of prisoners and the effective maintenance of public order are moving in the right direction," said Tomasi.

"Respect for the dignity of every human person and the common good are the two pillars on which the position of the Holy See has developed," he continued. "These principles converge with a similar development in international human rights law and jurisprudence."

Rebutting those who claim that the death penalty deters those who might commit violent crimes, Tomasi added: "We should take into account that no clear positive effect of deterrence results from the application of the death penalty and that the irreversibility of this punishment does not allow for eventual corrections in the case of wrongful convictions."

Pope will open an online meeting on 'demographic winter' in Italy

Pope Francis to Japanese students: 'Dialogue is what brings peace'