Vatican official warns of 'dialogue of the deaf' with LCWR

ROME -- In the wake of Tuesday's meeting with representatives of the Leadership Conference of Women Religious, the Vatican official responsible for a recent crackdown said he still believes the relationship can work, but also warned of a possible "dialogue of the deaf," reflected in what he sees as a lack of movement on the Vatican's concerns. 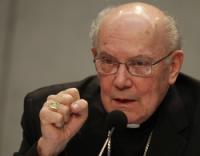 Cardinal William Levada, prefect of the Vatican's Congregation for the Doctrine of the Faith, floated the possibility that should the LCWR not accept the reforms outlined in an April 18 assessment, the result could be decertifying it in favor of a new organization for women's religious leaders in America more faithful to church teaching.

Levada strongly rejected charges that the move against the LCWR is based on "unsubstantiated accusations" or lacks transparency, both complaints leveled in an LCWR statement issued last week.

"In reality, this is not a surprise," he said, insisting that the process began four years ago and that its results are based not on secret accusations but "what happens in their assemblies, what's on their website, what they do or don't do."

Levada made the comments in an interview with NCR held shortly after the meeting between officials of his office and Sr. Pat Farrell, president of the LCWR, along with Sr. Janet Mock, the group's executive director.

The LCWR is the largest umbrella group for the leaders of women's religious orders in the United States.

Capping a four-year review, in April, Levada's office issued a stinging eight-page assessment of LCWR, citing "serious doctrinal problems" and "doctrinal confusion," including alleged "silence" on abortion and other pro-life concerns, a policy of "corporate dissent" on matters such as women priests and homosexuality, and the inroads of "certain radical feminist themes."

After Tuesday's meeting, Farrell and Mock released a statement describing the session as "open" and saying LCWR would ponder its further response in upcoming regional meetings and at an August national assembly. They declined to comment beyond the statement.

In his NCR interview, Levada said he believes the breach between Rome and the LCWR can be repaired.

At the same time, Levada described the risk of a "dialogue of the deaf," saying the Vatican has been in talks with LCWR for four years, but along the way the group has made choices that, in Levada's eyes, signal it's not taking their concerns to heart.

Specifically, Levada cited publication of an interview with Fr. Charles Curran, a moral theologian censured by the Vatican in the 1980s for his views on sexual morality, in a recent issue of the group's Occasional Papers as well as decisions to invite Barbara Marx Hubbard, often described as a "New Age leader," to address the upcoming August assembly meeting and to bestow an award on Immaculate Heart Sr. Sandra Schneiders, another theologian sometimes critical of Vatican policy.

Levada acknowledged he had given LCWR the go-ahead to proceed with its August assembly, but said he wasn't aware at the time of the choice of speakers or honorees, and that "I wish they hadn't made these choices."

Levada said while church officials cannot force LCWR to change course, if things come to an impasse, they can withdraw official recognition.

"What we can do, and what we'd have to do, is to say to them, 'We will substitute a functioning group for yours,' " he said.

Levada said he doesn't yet know what such a "functioning group" might look like, except it should be a conference "that would focus on the priorities of religious life, the life of holiness, which is the fundamental call of all of us in the church."

While there is already a rival umbrella group in the United States known as the Council of Major Superiors of Women Religious, broadly seen as a more traditional alternative to LCWR, Levada said "it could very well be" that a new group would have to be created to absorb the official role of LCWR. He stressed he hopes things don't come to that.

"We would like to see an effective and strong LCWR," he said.

Levada also acknowledged that the Vatican cannot block the LCWR on its own from withdrawing from the official orbit and re-incorporating under civil law, but said that should the group make that choice, "the Holy See isn't going to give patronage to it."

In the short term, Levada said he would take as evidence that things are moving in the right direction if LCWR enters into "a sincere, cordial and open dialogue" with Archbishop J. Peter Sartain of Seattle, tapped by the Vatican to oversee the reform envisioned in the doctrinal assessment.

On other points, Levada denied that the move against LCWR was motivated by a desire to assert control over property and other assets of women's orders in America and rejected suggestions that the aim of the overhaul is to bring LCWR under the permanent control of the American bishops.

Rather than "conspiracy theories," Levada said, the focus should be on the substantive issues in the Vatican critique.

"The church is a broad umbrella, and it doesn't quickly exclude people, even people who disagree on one point or the other," he said. "But ultimately, this is about a group that represents the church doing so in a way that is accountable to the teaching and tradition of the church."

Vatican official warns of 'dialogue of the deaf' with LCWR

Places in the world to get universal health care coverage