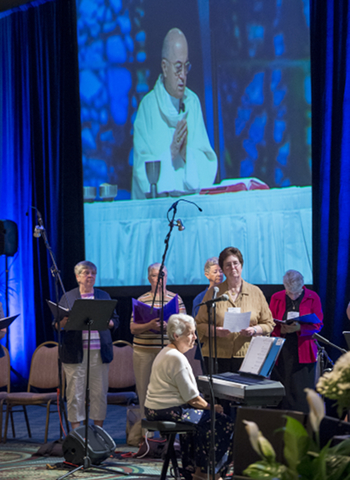 As U.S. Catholic sisters are meeting to discern their relationship with the church’s bishops, the archbishop given expansive oversight of them by the Vatican told their annual assembly Thursday the Virgin Mary teaches the faithful to hand themselves over “completely to the will of God.”

Mary teaches that it’s only in “submitting ourselves over to the one who made us … that we find fulfillment,” Seattle Archbishop J. Peter Sartain told some 825 sisters during a homily Thursday morning, which was the Feast of the Assumption of the Blessed Virgin Mary, a holy day of obligation for Catholics.

“She shows to us … what God himself desires to do in us all and through the church when we let the grace of God overtake us without placing an obstacle between ourself and that grace,” he continued.

Sartain’s homily came on the third day of the annual assembly of the Leadership Conference of Women Religious (LCWR), which is meeting here through Friday.

LCWR, which represents about 80 percent of the some 57,000 U.S. sisters, is meeting 18 months after the Vatican issued a sharp critique of the group and ordered Sartain to exercise control over its statutes and programs.

After meeting in a closed-door session this morning to discuss conversations LCWR leaders have had with Sartain in past months, LCWR members are to hear from the archbishop himself this afternoon.

Members have been asked by LCWR leaders not to discuss Thursday’s meetings with members of the press.

Thursday’s Mass was a special occasion for Catholics, who are celebrating the solemnity of the feast of the Assumption, when it is taught that the Virgin Mary was assumed into Heaven.

Concelebrating at the sisters’ assembly with Sartain was Archbishop Carlo Viganò, the Vatican’s apostolic nuncio, or ambassador, to the U.S. The two also celebrated Mass for the sisters together on Wednesday.

Beginning his homily by mentioning how young children are “effortlessly” open to the world around them, Sartain said Mary “did not place any obstacles between herself and the grace of God” but “breathed in [the] gift of God’s loving care.”

“And, breathing it in, letting it overtake it completely, she placed herself without any hindrance at all into the hands of God,” Sartain told the sisters.

Following is Sartain’s full homily to the members of the Leadership Conference of Women Religious on the feast of the Assumption.

In the first months and years of our lives, the fact is that we’re like sponges -- so we simply learn things and take things in by being there, without even knowing. Effortlessly, we breathe in the knowledge around us and so things become a part of our life.

Those words become, in many ways, sort of a model that we have to overcome as time goes by. It isn’t about me. And in our relationship with God it’s all about “yes.”

What strikes me about Mary in the Gospels is that she did not place any obstacles between herself and the grace of God. And so she breathed in this gift of God’s loving care, God’s mercy. That itself was God’s gift to her from the moment of her conception, preparing her to be the mother of the Son of God, to be the mother of the savior. No obstacle at all did she place between herself and the grace and mercy of God.

And, breathing it in, letting it overtake it completely, she placed herself without any hindrance at all into the hands of God. Everything for Mary was about you -- was about God and God’s grace and God’s goodness.

Mary is a string of paradoxes when we read about her in the New Testament. In so many ways she’s quiet in the Gospels, and yet she’s the hinge of everything. She’s an unwed mother. She’s a pregnant virgin. She’s an anonymous star. She’s a no one called about to be the center of so many things.

Mary was one who took God’s word to heart and lived it. She heard it and put it into practice. In fact that’s the definition that Jesus himself gives to a disciple. “Blessed are they who hear the word of God and keep it,” said Jesus in response to those who said to him, “Blessed are the womb that bore you and the breast that nursed you.”

In other words, his response to them was, “Yes, blessed is she, but blessed is she even more because she hears and ponders the word of God and keeps it.”

For Mary, it was enough that she pondered the words of God and let them turn over in her heart -- over and over again, as the Gospel tell us. Without, in a sense, any desire or a need to figure things out in the way that we normally think of figuring things out -- or resolve them to her own personal satisfaction.

It was enough, apparently, for her to let the things that she witnessed but did not always understand roll around in her heart -- seeing them as joined to God’s will for her, recognizing that of these things that she witnessed, all of these things of which she was a part, will be resolved in the love of God just as her own call came from the heart of God.

In some ways, Mary’s faith is like the faith of Abraham. Because Abraham went out not knowing where he was to go. God had simply said to Abraham, “Go forth to the land that I will show you.” So he went forth on the basis of a promise of a promise.

And Mary did the same thing. Abraham went as the Lord directed him. Mary said, “Be it done to me according to your will.”

There’s a phrase that we hear often these days in many bookstores -- if there are any bookstores left -- and you can see a section that will say, “Self-help,” “self-improvement,” “self-fulfillment.”

What’s so odd about these books and these titles is that they really, from our perspective as disciples of the Lord Jesus, as believers in God, they are based on a fallacy. The fact is, I cannot fulfill myself. It’s impossible for me to fulfill myself.

That is precisely what Mary shows to us by handing herself over completely to the will of God. By saying, as she did, “Yes,” and, “Let it be done as you say,” she came to flower perfectly.

As we see today on this solemnity, when taken into Heaven body and soul, God shows her and the church -- because she’s the symbol of the church for us in this sense as Lumen Gentium says -- she shows to us what the grace of God, what God himself desires to do in us all and through the church when we let the grace of God overtake us without placing an obstacle between ourself and that grace.

There’s a little phrase in Thomas Merton’s book New Seeds of Contemplation about Mary that has always stayed with me. It was an enlightening phrase for me when I first read this as a young man.

Here’s what Thomas Merton wrote many years ago: “This is precisely Mary’s greatest glory. That having nothing of her own, retaining nothing of a self that could glory to anything but her own sake, she placed no obstacle to the mercy of God and in no way resisted his love and his will.”

And so today, in our celebration, we see our hope, what God has in store for the church, of whom Mary is the image -- through the life of the assumption of one who bore God’s word, listened to his word, pondered his word, kept his word, prayed his word, trusted in his word, and took his word as her own.

May it be the same for me and for you. Amen.