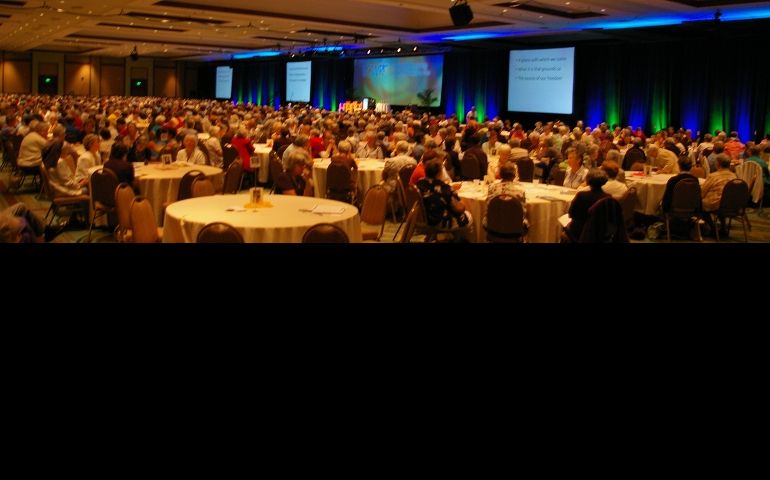 Orlando, Fla. — The archbishop given expansive oversight by the Vatican of U.S. Catholic sisters told their annual assembly Tuesday he seeks to be their “brother and friend.”

The brief remarks by Seattle Archbishop J. Peter Sartain came in the opening session of the four-day meeting of the Leadership Conference of Women Religious (LCWR).

The group, which represents about 80 percent of the country’s 57,000 Catholic sisters, is meeting 18 months after the Vatican sharply criticized it and placed it under Sartain’s control, naming him its “archbishop delegate” and giving him wide authority to review its statutes and programs.

The past year and a half, Sartain told the 825 assembled sisters, had given him “numerous opportunities” to meet with their leaders over the matter. While they have had some “very significant conversations” during that time, he said they had also had humorous ones too.

“We have developed a wonderful respect for one another,” said Sartain. “And yes I would say a friendship with one another.”

“I am here this week with you yes as the apostolic delegate …and as the representative of Pope Francis,” Sartain continued. “But I am also here as your brother and friend.”

Later, in a brief interview with NCR, Sartain said he felt “very welcomed” by the sisters and that he thought he had “maneuvering room” from the Vatican to best determine how to handle the doctrinal assessment.

He was one of three priests who spoke at the opening assembly, being held in Orlando Aug. 13-16 and focused on the theme of evolving leadership.

The others were Msgr. John Giel, a vicar general for the Orlando diocese, and Archbishop Carlo Viganò, the Vatican’s Apostolic nuncio, or ambassador, to the U.S.

“I especially want to convey to you the heartfelt wishes of the Holy Father who is always in a special bond of spiritual communion to you and is most thankful to you for all the good you have been doing throughout the years,” Viganò said in his remarks.

“By the sacrifice of your own lives you have been deeply touching other people’s lives, bringing hope and healing, helping to form minds and hearts in the image of Jesus,” Viganò continued.

Leaders of LCWR and the individual institutes of U.S. sisters have expressed pain and confusion over the Vatican's move against their group, made in an April 2012 "doctrinal assessment" published by the Vatican’s Congregation for the Doctrine of the Faith.

The presence and words of the apostolic nuncio at this year’s assembly may be taken with special significance by some in the sisters’ ranks, who expressed hope at the March election of Pope Francis that the new pontiff might take a softer line on the situation than Pope Benedict XVI.

A brief statement from the doctrinal congregation in April said Francis "reaffirmed the findings of the Assessment and the program of reform."

Speaking in a brief interview Tuesday night, Viganò said the pope was informed on the LCWR matter.

“You think that he’s not aware?” Viganò said in response to a question NCR. “The church in the United States has a prominent role to play in many senses. It’s full of strength and possibilities, and challenges too.”

Dominican Sr. Sharon Simon, who represents a congregation of Dominicans based in Racine, Wisc. at LCWR, said she found Viganò and Sartain’s opening remarks to the gathering unexpectedly hopeful.

“I thought they were very sincere,” she said. “It’s very hopeful.”

Another congregational leader, however, was less enthusiastic about the night’s proceedings. That leader, who asked not to be named because of the sensitivity of ongoing discussions between the sisters and Sartain, said she did not think LCWR’s leaders had had enough meetings with the archbishop to be considered friends.

As Sartain called the sister leaders’ friends, said that leader, the LCWR leaders had looks of “puzzlement” on their faces and were not smiling.

Discussion between LCWR and Sartain have largely taken place outside public scrutiny. The Seattle archdiocese’s director of communications, Greg Magnoni, said in early August that Sartain has had conversations with LCWR leaders by phone and that was “the main way” they had been communicating with each other.

At this year’s assembly, named “Leadership Evolving: Graced, Grounded & Free,” LCWR members are expected to continue discussions on the Vatican mandate. Sartain, as first reported by NCR, is also expected to address the group in more detail some time on Thursday.

“I can’t think about the task that the Holy Father asks me to take on … without it being very personal,” he said, mentioning sisters he knows who ministers as teachers, nurses, and parish ministers. “Because it is for me very personal.”

Viganò told the assembly he was “really amazed to see all of you gathered here, so numerous, so joyful -- so full of joy and the desire to serve the Lord.”

The apostolic nuncio also read at length from a May address in Rome by Pope Francis to an international group of leaders of Catholic sisters, called the International Union of Superiors General (UISG).

During that talk, the pope told the international group, a membership organization of some 1,800 leaders of congregations of women religious worldwide, that sisters were a “light in the world.”

Reading from the talk, Viganò told the U.S. sisters to stress the three traditional religious vows of poverty, chastity and obedience and that the best exercise of authority “is service, whose bright summit is upon the cross."

“What would the church do without you?” Viganò read from the pope’s remarks. “She would like your motherhood, warmth, tenderness, and motherly intuition. She would lose the first line of the evangelization.”

“We know that the decisions facing us are enormous,” Deacon told her members. “The consequences of our choices can have significant impact on how we bring religious life into the future.”

Before finishing for the evening, the LCWR members were led in a “spirit prayer” written by St. Joseph Sr. Rita Woehlcke.

“We are here together, lowly yet exalted, dear God, because of your faith in our questions and right-hearted seeking, your hope in our perseverance in difficulty, your love for these faces of ours turned to you, your trust in our best desires, your delight in our hearts eager for you and your spirit,” they continued.

LCWR’s assembly continues Wednesday morning with a keynote presentation by Franciscan Sr. Ilia Delio, an author of more than a dozen books who holds doctorates in pharmacology and theology and is known for her work on environmental issues.

Her keynote and subsequent discussion, for which LCWR has set aside more than five hours, is to focus on "Religious Life on the Edge of the Universe."

On Friday, the group will bestow its highest honor on Franciscan Sr. Pat Farrell, who led LCWR from 2011 to 2012 and guided its initial response to the Vatican mandate.

LCWR says it is honoring the former president for the leadership she showed "through an exceptionally challenging time."

LCWR meets with Vatican overseer under lock, with guards

Vatican overseer preaches to LCWR on Mary's submission to God

NCR contributors in the news