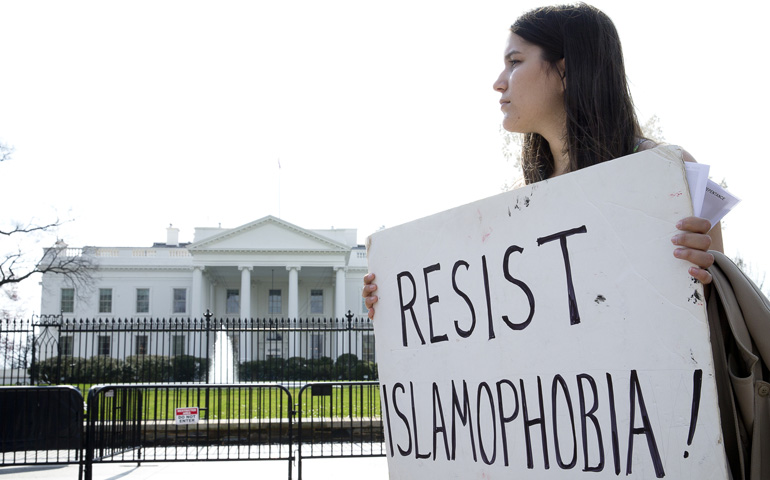 A peace activist holds a sign saying "Resist Islamophobia!" during a prayer service in early March outside the White House in Washington. (CNS/Tyler Orsburn)

The Vatican continues to make its case against Christian and Catholic fundamentalism. La Civiltà Cattolica, a Jesuit magazine with ties to the Vatican, published a lengthy article on the genesis and effects of fundamentalism in the United States. One of the article's co-authors, Jesuit Fr. Antonio Spadaro, is a close confidant of Pope Francis.

Spadaro provides some of the historical development of fundamentalism in this country going back to the early 1900s. More importantly, he describes some of the effects of what has become the religious right in our country, and how it has influenced Presidents Reagan, Bush and now Trump.

First of all, there is the focus on the last book of the Bible, Revelation. If one sees the end of the world as one of the most compelling tenets of our faith, it changes in a dramatic fashion how one views the world. War and major weather disturbances (climate change) are signs that the end is coming soon. Even the creation of conflict can be seen as a positive effort to help bring about the last days.

There is no reason to work for peace, justice or climate improvement since one is only interfering with God's plan to bring about the end of time.

Although the article does not say enough about religious freedom in my estimation, it does say we must avoid a defense of the notion of total freedom, which appears to be a direct challenge to the secularity of the state. It becomes easier to see why fundamentalist Christians believe their freedom of religion is threatened when others who disagree also possess freedom. They see their position as true and therefore others who believe differently have no rights. Many Catholic Bishops in the United States seem to hold a similar position.

Finally, Spadaro speaks of how the religious right and conservative Catholics have formed a united front on issues they hold in common. These issues include abortion, same-sex marriage and other matters considered moral or tied to values. Their strange ecumenism, as Spadaro calls it, leads to a xenophobia and Islamophobia that tends to promote hate, deportations and the building of walls rather than bridges.

The fundamentalist plan is to set up a kingdom of the divine here on earth. While those Protestants and Catholics who embrace this concept may differ on how they understand it, they both subscribe to an ideology of conquest. They see the recent election as a spiritual war in which divine intervention may have been involved.

This movement of the right seems motivated primarily by fear, and the need for religion to impose a necessary order on culture and government. Francis rejects this notion. He refuses to reduce the Islamic religion to terrorism.

Some who reject Spadaro's thesis say he speaks about people who don't exist. No known Catholic holds all of these specific views. Of course, every individual has their own set of beliefs, but such an argument misses the point of Spadaro's analysis. He is speaking about forces at work that have led to certain joint efforts. Republicans and the religious right are working together to achieve certain ideological goals that coincide with their religious beliefs. Catholics have been working with the religious right to achieve certain common moral objectives.

The reaction of the "haters" seems a clear sign that our article is telling the truth about the "ecumenism of hate" https://t.co/T0WSu64aLe

NCR's own Thomas Reese, in analyzing Spadaro's article, agrees with much of it but encourages additional attention to how fear has contributed to where we are in our present political situation. Importantly, he argues that we must listen to those who are troubled by today's world, whether in Appalachia, Alabama, or Europe, and better discern what is motivating them.

I would conclude with my belief that it is the biblical literalism of the religious right that has made this such an intractable issue. Once you deny evolution and consider what scientists and others are saying as false, everything is easily seen as false (fake news). It is difficult to counteract such strong beliefs. If I believe my religion and thus my entire way of life is threatened if the Bible is not accepted literally, I can't change that view and maintain my sense of who I am. How do you break that? If scientists cannot be believed, then climate change is a hoax and politicians who subscribe to such issues cannot be believed when they speak.

Fortunately, Catholics have not bought into the literalism of Genesis and do not see their religion threatened by evolution. Catholics, however, have become hung up on the notion that nothing exists except the issue of abortion. If they agree with a politician on every single issue except abortion, that candidate is not worthy of consideration. They have found ready allies in the religious right and thus their alliance.

I agree with Fr. Reese that we need to engage in dialogue with those who distrust government and fear the direction our country has been heading. It will be a monumental challenge, but it must begin with our being of service to those in need. We need to demonstrate that we have their interests at heart, and more importantly, we have ideas that can truly make their lives better.

Again, Pope Francis: "The contribution of Christianity to a culture is that of Christ washing the feet."