What a difference Inauguration Day makes 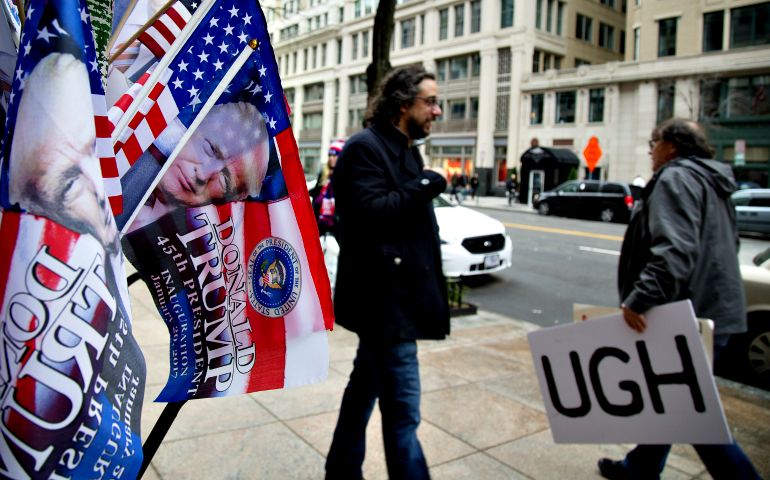 People walk in Washington, D.C., prior to the start of Donald Trump's swearing-in as the 45th U.S. president Jan. 20. (CNS/Tyler Orsburn)

On Jan. 20, the new POTUS (president of the United States), Donald Trump, was inaugurated. It should have been a dark day for those of us who did not vote for him, but it was not. And that was both a surprising miracle and a wake-up call.

As we piled into our car early Friday morning, I was relieved to realize that the three-plus-hour drive to see my husband Dan's Aunt Martha on Bainbridge Island — 90 miles and a ferry ride away — coincided with Trump's inauguration ceremony. The family road trip gave me an excellent excuse not to watch it. Yes, of course, we could have listened to it on the car radio. I conveniently forgot to turn it on.

Since early November, I sadly admit that my reaction to Trump's election has been mostly impotent grief. I have felt adrift in a gray and paralyzing brain fog in which waves of disbelief and disgust alternately swirled. Plus, it was the holidays and we have eight grandkids. I was straight-out too busy to think about much else, which was a mercy.

When we arrived at Martha's apartment, the inauguration seemed to be all she wanted to talk about. Martha is 94, sharp as a tack, reads The New York Times cover to cover at least once a week, and has long been one of my personal heroes.

Martha, a born-and-raised Republican who was reared in the rural Pacific Northwest, had nothing good to say about our new president. Candidly, her string of negative descriptors were a balm to my ragged spirit.

When this smart conservative lady expressed only shock and revulsion about the man our voting system had chosen, my own position was both affirmed emotionally and confirmed intellectually. Martha and I may be separated by 40 years in age and reliably opposite politics, but on this subject, our hearts and minds are in total agreement.

As we talked over lunch at a pizza place adjacent to her condo complex — Martha ordered her favorite white pesto pizza and a glass of Sauvignon Blanc; see why she's my hero? — it occurred to me that in the almost-century she has been alive, Martha has seen many presidents come and go, some good, some great, some bad, some horrible.

I asked her about that.

Smiling wryly, Martha said she couldn't remember what she had for breakfast, much less details about the presidents during the last nearly 100 years.

I smiled at how canny her answer was: It carried both a little truth and a little diplomacy, which actually sums up Martha's innate elegance well.

So, after we returned home, I did a bit of research. When Martha was born in 1923, Warren Harding was president. Since then, there have been 15 U.S. presidents, with Trump making the 17th commander in chief of her lifetime.

Like most Americans of her generation, Martha's youth was forged during tough times. She was only 6 when the stock market crashed in 1929. Her family scraped their way through the resulting Great Depression on their farm in Arlington, Wash.

She was 19 when the Japanese attacked Pearl Harbor, and her brothers and friends — including her fiancé, Bill — went off to fight in Europe, Africa and the Pacific. Once again, her family hunkered down to bare-knuckled survival on the farm, enduring rations and air raid drills and the suspense of when or if their young men would return.

Happily, Martha's Bill did come home from World War II, and they started their family in its Cold War aftermath. She was a young wife and mother, just getting their two baby boomer kids into school during the Korean War in the early 1950s.

When America sent troops to Vietnam in 1955, her kids were starting middle school, and most Americans were still united against communism and firmly behind our soldiers overseas. Her kids were teens and young adults in the 1960s and she became a grandmother in the '70s.

By the time our troops exited Hanoi in 1975, our country was polarized by anti-war sentiment and distrust of our leaders — President Richard Nixon resigned before he could be impeached in 1974 — and many of our soldiers returned to a home that was no longer traditionally patriotic nor even welcoming.

The last two decades of the 20th century found America nearly always involved in a war somewhere. If our patriotic unity was bruised by the late '70s, our troops' continual deployment around the world — for reasons that were downright confusing to outright covert — further wounded our national identity.

From Lebanon to Grenada, the Persian Gulf to Panama, Central and South America, Haiti and Bosnia and Yugoslavia and Somalia ... the images pouring at us via our television were overwhelming.

Martha buried her beloved Bill in the first year of the new century. They had been married for 57 years.

One year after Y2K, on that Tuesday morning in September 2001, she, like all of us, watched in real-time horror as the twin towers burned and fell. Not since the attack on Pearl Harbor 60 years earlier had we suffered casualties on American soil.

Martha shook her head as she watched a new generation of young men and women among her family and friends head off to wars in Afghanistan and Iraq. Some died there, but many of those who made it home were also gravely wounded. They carried physical, mental and emotional scars from battles in which America's true objectives for involvement were murky at best and mercenary at the worst.

So on this sunny, cold January day in 2017, she and I watched Trump's post-inauguration parade on a big-screen TV in a pizza parlor in Bainbridge Island, Wash. Wearily, Martha once again shook her head, uttered some pithy expletives, and smiled at me with that wry smile.

My heart expanded with the realization that this woman had survived far worse times than this, and was still kicking and cussing. For her, American politics long ago stopped being about parties and positions. Her nearly 100 years as an American citizen have taught her that it is really about the things that should bring us together, not push us apart.

Radiating through Martha is a core of native intelligence, blunt honesty, self-sufficient dignity, community kindness and family love. Our leaders will come and go, but where the rubber meets the road is with us. The Electoral College — and less than one quarter of Americans — may have elected this particular man, this particular time, but it ain't over till it's over.

Her steely blue eyes cut right through that fog that has been numbing me. For the first time in more than two months, my head felt clear, my heart strong, my resolve real. That Lutheran Republican great-grandmother simply and plainly kicked the butt of this Catholic Democrat grandmother, but good.

By God, if she can do it, so can I. The future of America lies with me, my kids, their kids, all of us working toward a time when we can actually be proud of what our country does, outside and inside of our borders.

While Trump may not be "my" president, this is my country. He is the 11th president in my lifetime. It's time for me to start working to help elect someone truly remarkable to be No. 12.