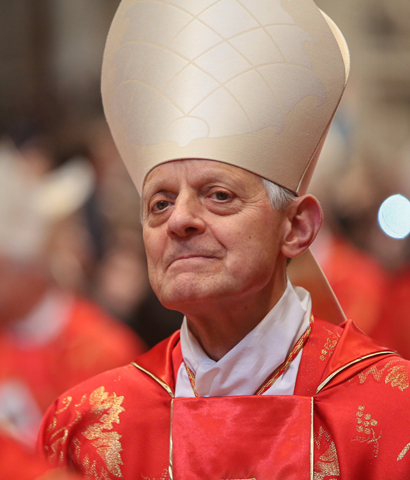 Pope Francis on Monday named Cardinal Donald Wuerl of Washington, D.C., as a member of the Vatican's all-important Congregation for Bishops, essentially ratifying Wuerl as a highly influential figure in terms of shaping bishops' appointments in the United States.

Wuerl was the only new American named to the congregation by Francis, although the pope also confirmed Cardinal William Levada, who stepped down in July 2012 as prefect of the Congregation for the Doctrine of the Faith, as a member of the body.

Francis likewise confirmed that the Congregation for Bishops will continue to be led by Canadian Cardinal Marc Ouellet, who's held the position since June 2010.

Notably, Francis did not confirm Cardinal Raymond Burke, president of the Apostolic Signatura, the Vatican's highest court, as a member of the Congregation for Bishops. Generally seen as occupying a prominent place on the church's conservative wing, Burke had been named to the Congregation for Bishops by Benedict XVI in 2009. The pope also did not confirm Cardinal Justin Rigali as a member, who stepped down as the archbishop of Philadelphia in 2011.

Under the Vatican's process for picking bishops, the papal ambassador, or nuncio, in each country is responsible for compiling a list of names of candidates, called a terna, for openings as they arise. That terna is then submitted to the Congregation for Bishops, whose members vote on the final list to be submitted to the pope.

Although all members vote on every nomination, observers say there's a natural tendency within the congregation to defer to the members who come from a particular part of the world when a vacancy arises in their region. The American members, therefore, tend to be especially influential in shaping picks for the United States.

Although in theory the pope is free to ignore the recommendations, in most cases the pope simply takes the top pick submitted by the Congregation for Bishops.

The other new members named by Francis Monday are:

Francis also confirmed 18 existing members of the congregation. Beyond Levada, the other prominent English-speaking member to be confirmed was Cardinal George Pell of Sydney.

The fact that Burke was not on the list may raise eyebrows, in part because some observers see him as representing a more aggressive line than the pope on the Western culture wars.

Burke recently gave an interview to the American Catholic broadcaster EWTN, for instance, in which he said Pope Francis' comments suggesting that church teaching on matters such as abortion and gay marriage doesn't need to be repeated "are not altogether easy to interpret" and said that in his view, "we can never talk enough" about the defense of human life.