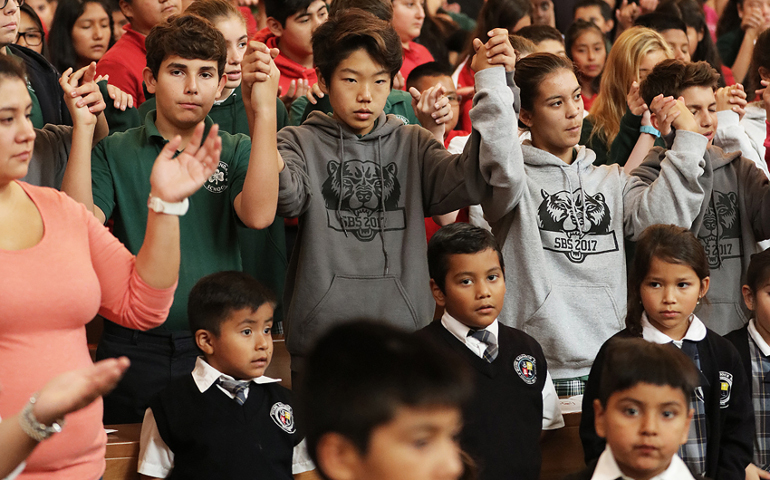 Young people join hands Oct. 25 during a children's Mass celebrated by Archbishop Jose H. Gomez at the Cathedral of Our Lady of the Angels in Los Angeles. (CNS/Victor Aleman, Vida Nueva)

Attendees at this year’s Call to Action panel spent their Saturday morning keynote session contemplating a question that troubles faithful Catholics throughout the United States: why isn’t the church attracting new generations of young adults?

To find an answer, conference organizers went directly to the source, inviting a panel of young adults to discuss their Catholic identities and their search for community. Though the panelists were in their 20s and 30s, the vast majority of the audience, who listened with rapt attention, were from the Baby Boomer generation or beyond.

The panel was moderated by Rhonda Miska, a member of CTA’s 20/30 group and candidate with the Sinsinawa Dominicans. A writer and teacher of religious studies at Clarke* University, Miska replaced Kaya Oakes, who canceled her appearance due to illness.

“Millennial Catholics often feel marginalized in traditional parishes, but seek out and cobble together, in a do-it-yourself sort of way, various forms of community,” Miska said in her introduction.

“We are in conversation today because we want to do the difficult, demanding, but necessary and vital work of building community at Call to Action across the generational divide,” Miska continued. “Given recent events, this is a crucial witness that we can offer our nation.”

Donnieau Snyder*, a Roman Catholic Womenpriest and psychologist who serves homeless veterans and young adults coping with schizophrenia, began the conversation by lifting up the mistrust and doubt that many young adult Catholics express about the church.

“As a seeker, I dissent and doubt, and that’s a good thing,” Snyder said. “It is something to be embraced.”

Like many in her generation, she seeks out small communities, “because they give me the freedom to be myself.”

The conversation continued with Joe Kruse, a founding member of Rye House, a Catholic Worker community in Minneapolis, Minn.

Kruse says that though he claims his Catholic identity, being associated with the institutional church has been a challenge among his peers, especially in the St. Paul and Minneapolis archdiocese, where the sex abuse crisis and fervent campaigning against marriage equality by former Archbishop John Nienstedt “cut deep wounds” and “triggered pain and disgust” among many Catholics.

Kruse detailed his own encounter with Catholic leaders in the wake of the killing of Jamar Clark, a 23-year-old unarmed black man who was shot through the head by police while lying on the ground.

When protests erupted in the street of Minneapolis, Kruse and other members of Catholics for Racial Justice visited with a local auxiliary bishop to discuss the glaring lack of response by the Catholic hierarchy to the tragedy.

“It was painfully clear to us how disconnected the bishop was, how isolated he was from the bleeding heart of Christ in our midst,” said Kruse. “It became clear that racism and white supremacy were so deeply embedded in our church that its local leaders had lost their voice.”

“This is just one story of how the church broke my heart," said Kruse. “I ask myself almost daily why, in the face of such despair, do I continue to identify as Catholic?”

For John Noble, who followed Kruse on the panel, one of the benefits of being a millennial Catholic is that many in his generation do not think of their Catholic faith as an either/or commitment.

“Millennials have troubled the binary of what it means to be inside or outside,” said Noble, a senior at Drake University, who serves as a pastoral assistant at the Downtown Disciples Church in Des Moines, Iowa.

Noble identifies himself as “a fully LGBTQ affirming, women’s ordination supporting, Black Lives Matter proclaiming Catholic,” and believes that there are many young adults who insist that they can be all of those things and still be Catholic.

“One of the best things our generation can bring to this conversation is that we really hate binaries,” Noble continued. “When we start to think creatively about what our church can be, that is where our generation has a lot to say.”

All of the panelists agreed that one of the best ways to engage Catholics is to ask them how the church can be of service to them. But service doesn’t simply mean finically supporting young adults, it also means walking alongside them.

“Mentorship is so deeply appreciated by our generation,” Snyder said. Young adults don’t need advice from their elders, but “the wisdom of what they’ve learned from their experiences.”

“We want to do stuff with the older generation,” Kruse said. “Go to protests, get arrested, be in community with them.”

"There is a lot of culture of encounter that needs to go on here," Noble said, echoing the words of Pope Francis. "Stop trying to bring us to church, and try to bring the church to us."

Most importantly, the panelists said, there must be mutuality in the relationship between young adults and older generations of Catholics.

“It has to start with us coming to you, and you coming to us, and asking the question, 'How can we serve you?'" Noble said to the audience. “And then acting on the answer to that question.”

*The statistic has been updated from an earlier version; the spelling of Snyder's name and Clarke University has been corrected.