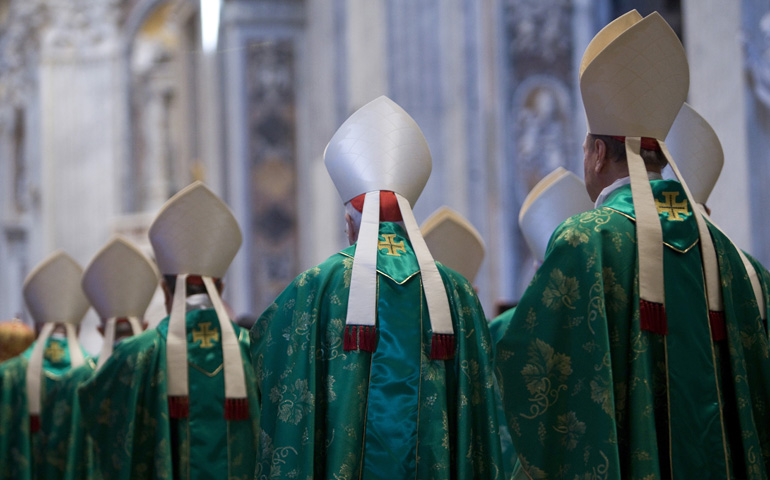 Bishops arrive for a Mass celebrated by Pope Francis to open the extraordinary Synod of Bishops on the family Oct. 5 in St. Peter's Basilica at the Vatican. (CNS/Maria Grazia Picciarella, pool)

The appointment of Blase Cupich as the new archbishop of Chicago is a good sign. He is a pastoral bishop. His writings emphasize civility in discourse and a willingness to listen. He is not a cultural warrior. He seeks dialogue rather than confrontation. Hopefully, Cupich's pastoral orientation is a harbinger of appointments to come.

Last year, Pope Francis also told bishops at World Youth Day in Rio de Janeiro that they should not be bishops of the airport, but bishops of their dioceses. He doesn't want them being jet-setters, always flying off to Rome and to meetings and conferences. They should be home with their people.

The pope has also said many times that he wants a "poor church for the poor." He set an example of this when he was archbishop of Buenos Aires, Argentina, living in a one-bedroom apartment and taking public transportation around the city. He does not like self-aggrandizing bishops like the bishop of Limburg, Germany, who spent $42 million renovating his house.

When Francis was in Korea in August, he told the Korean bishops, who are now wealthy in a comfortably middle-class country, that "solidarity with the poor is at the heart of the Gospel ... it must penetrate the hearts and minds of the faithful and be reflected in every aspect of ecclesial life."

I hope the pope's prayer for simpler priests and bishops is heard in heaven. But if past is prologue, I am not very confident.

The problem as I see it: the way bishops are groomed and chosen. Our bishops are chosen more for their connections than for their simplicity. They are often much more ecclesiastical careerists than they are pastors. In fact, very few of them have much (if any) actual parish experience.

Most of our bishops have been chancery office officials, seminary rectors, diplomats, professors, superiors of religious orders, and agency directors. They have worked in Vatican offices or in embassies, but they have not often been in parishes before they have been appointed bishop.

I have had three bishops in my time as a priest. Together, they had more than 150 years of service to the church following their ordinations. But together, they had only about three years combined of actual service in ordinary parish ministry. In other words, they had very little of the "smell of the sheep." They had been seminary rectors, priest secretaries to bishops and cardinals, fundraisers, and auxiliary bishops. Just no parish priests.

This does not mean that they were not pastoral men or didn't understand pastoral problems, at least in the abstract. After all, Pope Francis, as Fr. Jorge Bergoglio, did not have much pastoral experience. He was the rector of the Jesuits in Argentina. It was only when he became auxiliary bishop that he began to get immersed in ordinary parish life.

The problem is that our bishops do not know firsthand much of the ordinary things of parish life: baptizing babies; burying the dead; anointing the sick; teaching catechism; instructing converts; talking to troubled people; dealing with addicts, alcoholics, abusive spouses and failing marriages. They have not had to do the humdrum of parish life. I always say that everyone on our parish staff "cleans toilets," including me. They have not celebrated Mass every day in a community that knows your faults very well and is unimpressed with your office.

Of course, there are many very pastoral bishops. In my experience, they are often bishops of smaller dioceses or auxiliaries who toil away in obscurity. But the ones who see themselves on the career ladder are the ones Pope Francis is talking to. They are the airport bishops.

What is it that has been valued in the appointment of bishops over the last 40 years?

It seems to me two things: obedience and institutional conformity. Pastoral experience was not seen as necessary or important.

In the last half century, how did (and does) one actually become a bishop in the Catholic church?

There are four common steps.

First, apprentice yourself out to a bishop as his personal secretary.

Secretaries learn the day-to-day life of a bishop and the inner workings of the diocese. Of course, the actual day-to-day work of a bishop's secretary is not very priestly or pastoral. They drive the car, pack the bags, make the plane reservations, keep the calendar and basically act as a "man Friday."

Once, when a priest secretary to our archbishop was made a bishop, our parish secretary asked me quite innocently, "Do they always make the archbishop's valet a bishop?"

Second, get an advanced degree, preferably in canon law.

Knowing the rules of the church is the sine qua non for a bishop. Degrees in liturgy or dogma are nice, and maybe once in a while they are useful, but the real gold standard is canon law. All Vatican diplomats study canon law. It is the instruction book on the machinery of the church.

Third, get a Roman connection. This step is essential.

For Americans, this often means that you either go to the North American College in Rome for your seminary or graduate work. There are other ways to get a Roman connection, such as getting a job in some Vatican office, serving in the Vatican diplomatic corps, working for some pontifical charity, or maybe even getting yourself assigned to the Vatican embassy in Washington, D.C. (Both Cupich and Cardinal Timothy Dolan worked there.) Or you could work at the U.S. Conference of Catholic Bishops' headquarters in Washington.

Fourth, keep a sharp eye on the weather in Rome. Knowing which way the wind is blowing in Rome helps adjust your own sails.

For example, if the Second Vatican Council is out of favor in Rome, it should be out of favor with you. If "fiddleback" vestments and lace surplices are a clerical fashion statement in Rome, they should be hanging in your sacristy closet. Does Rome oppose liberation theology, feminism, and Vatican II-style liturgical renewal? Well, then, so do you.

If you don't think I'm right, take a careful look at the resume of your own bishop. Ask him, "What did you do before you became a bishop?" "How many years did you actually have in full-time parish ministry?"

Bishops often lament loudly and publicly, "All I ever wanted to be was a simple parish priest." Don't believe it. If that was the case, it could have been easily arranged, Father. After all, in 2014, we have 3,496 parishes in the United States with no resident priest. Some people who get ordained don't really want ordinary parish life. They are more comfortable being CEOs than pastors.

Does it make any difference that we get bishops who have so little experience in the parish? Yes, I think so.

Or consider the way some bishops spend money on themselves, such as in Newark, N.J., where $1.5 million was spent on renovations to an already lavish retirement home in the same year the archdiocese was closing inner-city schools.

Careerist bishops also means a lack of independence of thought. This is a problem at the top.

In October 2013, Pope Francis gave an interview to the Roman newspaper La Repubblica. In commenting on church leadership, he said, "Heads of the Church [the popes] have often been narcissists, flattered and thrilled by their courtiers. The court is the leprosy of the papacy."

The bishops, too, have their courtiers.

Being a career bishops means having a Vatican-centric view of the church. Pope Francis said in that interview with La Repubblica, "This Vatican-centric view [of the church] neglects the world around us. I do not share this view and I'll do everything I can to change it. The Church is or should go back to being a community of God's people, and priests, pastors and bishops who have the care of souls, are at the service of the people of God."

[Fr. Peter Daly is a priest in the archdiocese of Washington, D.C., and has been pastor of St. John Vianney parish in Prince Frederick, Md., since 1994.]