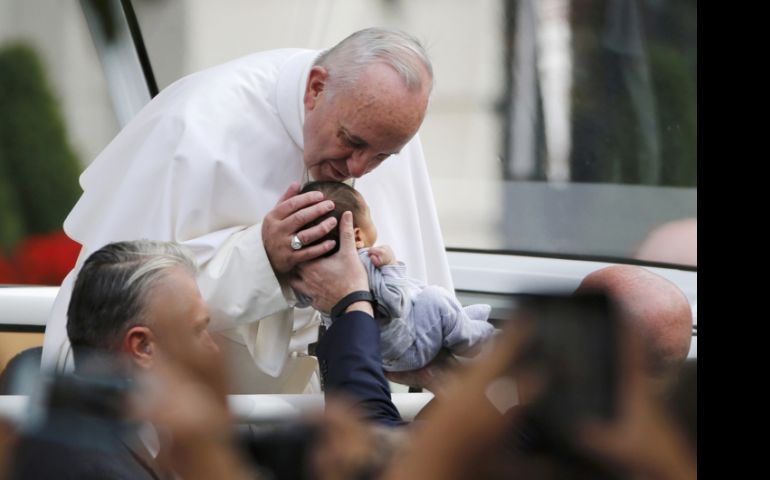 Pope Francis stops to kiss a child as he makes his way in the popemobile to Independence Hall in Philadelphia Sept. 26. (CNS/Jim Bourg, Reuters)
This article appears in the Francis in the United States feature series. View the full series.

Pope Francis has gone home. But when he was here it was a great week to be a Catholic in America. He made us feel proud of our church again.

On display for the whole world was the beauty of our liturgies, the inspiration of our prayers, and the magnificence of our music. The faces of our people showed us to be like the throng described in the book of Revelation: every race and nation, people and tongue.

Also on display were our good works. When the pope visited soup kitchens, schools and Catholic Charities, the whole nation was reminded of the importance of the corporal works of mercy done by our church in the name of Christ.

It was extraordinary that for practically a whole week, the church's teaching was talked about in a serious way on national television. Bishop Robert Barron explained the Eucharist. George Weigel explained vespers and papal encyclicals. Fr. James Martin talked about the Jesuits. Fr. John Enzler, the director of Catholic Charities in Washington, talked about the good works of the church for the poor. Sr. Simone Campbell talked about Catholic social teaching.  Even TV personalities, like Chris Matthews and Brian Williams, got a chance to show their pride in their church and their knowledge of the faith.

The pope made some great speeches. His talk to Congress was masterful in avoiding partisanship and inviting dialogue. He called us to our highest ideas as a nation.

I was thrilled that three of the four people he mentioned in the speech to Congress, are in our parish stained-glass windows: Dorothy Day, Thomas Merton, and Martin Luther King. I was thrilled again on Sept. 26 when he talked about Katherine Drexel, who is also in our windows. Some people asked me if I wrote his talks.

The pope moved us to tears in a good way. Like John Boehner I blubbered through much of the talk to Congress. Lots of people told me that they were crying all week. One lady, a native of Puerto Rico, told me "I have been crying all week." The people at our Spanish mass said they couldn't turn the TV off all week. For the first time, they said, they felt like their voices were being heard.

This pope is a master of the symbolic gesture.

When he stopped the motorcade in Philadelphia to embrace a child with cerebral palsy he symbolically noticed all the hidden sick. When he let a little girl come to him with a note on behalf of her undocumented immigrant parents, the plight of millions of immigrants was on display. When he embraced prisoners in Philadelphia, people behind bars had their lives recognized.  When two day laborers in New York City presented the pope with a tool belt and a hard hat, the lives of people who do hard physical labor were recognized as good and noble. The forgotten were noticed. That's what Jesus did. Isn't that what we all want?

Even his visit to the Little Sisters of the Poor was an important symbolic gesture. It said more than a speech could that he supports not only their good work, but their efforts to protect religious liberty. It was the right way to enter that debate; subtle but clear.

Being part of the Archdiocese of Washington our parish benefited from proximity. We took a busload of 50 pilgrims to the canonization mass at the Catholic University of America. Seven of our CCD kids and their chaperones got up at 3 a.m. to stand on the lawn of the Papal Nunciature (embassy) to greet the pope as he came out one morning. Some of them got to shake his hand. One had his head rubbed by the pope. Several took selfies with him. Two of our young adults bid farewell to the pope on the tarmac at Joint Base Andrews.  Three of our deacons distributed communion at the papal mass at Catholic University. Practically everyone in our parish had their own pope sighting story.

Some people in our parish were not happy to see the pope. Some conservatives were biting their tongues all week.

The Sunday before the pope arrived, one man asked me to stand next to the life-sized cardboard cut-out image of Pope Francis in our lobby. (Every parish in the Archdiocese received one.) "Stand over their by the pope," he said, "So I can get a picture of my two favorite Communists together." I shot back, "Now we see just how many cafeteria Catholics there are."

Victims of clerical child abuse were also not very happy with the pope. One told me that Pope Francis should have met with more victims of clerical abuse, like Pope Benedict did. Another was upset by Pope Francis' talk to the bishops at St. Matthew's Cathedral in Washington, when he expressed sympathy for bishops who had endured trials in dealing with pedophilia (I was rather shocked myself). The pope's meeting with a tiny group of victims of abuse on the last day in Philly was too little and too late.

Overall, it was a great week and a fantastic visit.

The only cloud on the horizon was his health. At CUA I could clearly see that he was limping, perhaps because of his sciatica. He seemed tired throughout the canonization mass. Sometimes his voice was weak, perhaps because he has only one lung. At times in the visit his voice muffled, reminiscent of John Paul II's voice toward the end.

I want this pope to stay healthy. We need him. I need him.

He makes the church feel young again. He helps us to recover our strength and draws people to the faith. (We were crowded at church on the Sunday after).

He reminds us why we are proud to be Catholics.