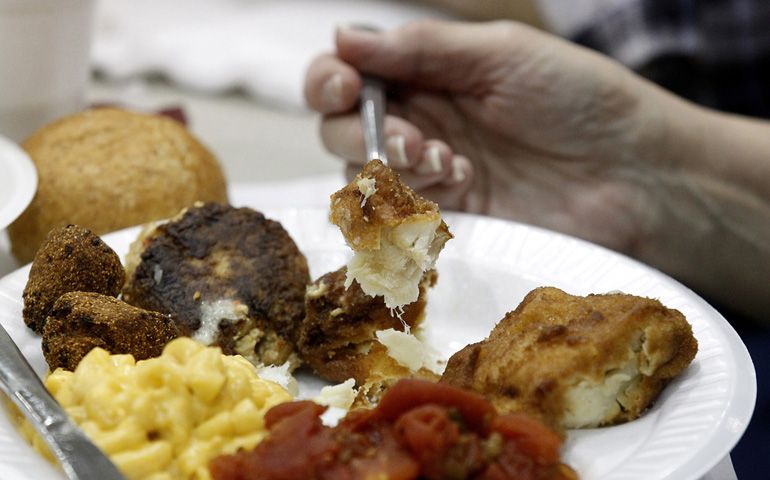 After the Lenten fish fry ends, what do you do with all that leftover cooking oil?

Several parishes in the Pittsburgh diocese have turned to alternative energy as a solution to the not easily disposable byproduct of frying pounds and pounds of cod and catfish.

During the 2010 Lenten season, Zero Fossil began looking for a way to fuel the diesel engine of its recently purchased 1970s Mercedes Benz box truck. The company, which sells alternative energy generators, all fabricated from solar panels and wind turbines, saw a contradiction in running its trucks off gasoline to deliver its products to concerts, festivals and other outdoor events.

"We realized that the trifecta was really to then be able to deliver those systems ... using something other than a fossil fuel," said Steven Kovacik, founder and president of Zero Fossil.

With the diesel engine originally built to run on peanut oil, Zero Fossil converted the engine to run off waste vegetable oil. The next step was locating a reliable provider of the new fuel.

Kovacik ultimately found his answer in the church, realizing the numerous parishes in the area that must use large quantities of vegetable oil during fish fries. Many were all too happy to offer their excess.

"If the church is able to help somebody with something, that's kind of like what we feel we should be doing," said Fr. Daniel Sweeney, pastor at St. Maximilian Kolbe Parish in Homestead, Pa.

St. Maximilian has donated its oil to Zero Fossil since 2013. Holding fish fries every Friday from September through May -- serving as many as 700 people weekly during Lent -- Sweeney estimated the parish fills its 100-gallon storage bin three times a year.

St. Rosalia Church in Pittsburgh began donating this year as a way to cut back on waste, said Amy Goetzman, one of the parish's fundraiser organizers.

Altogether, Zero Fossil estimates it receives 500-1,000 gallons of oil per week during Lent, largely from the roughly two dozen parishes it collects from on Sundays and Mondays. Its warehouse currently houses as much as 15,000 gallons ready for processing -- mammoth amounts the company's fleet of five trucks comes nowhere near using.

Last year, the company began sharing their warehouse space and the excess oil within it with Fossil Free Fuel, which converts it into different biofuel blends.

"So nothing goes to waste, it's all completely reused, recycled," Kovacik said.

After processing, the vegetable oil mimics diesel fuel, but burns 95 percent cleaner, in part due to Food and Drug Administration regulations. And unlike oils from restaurants and bars -- where it is used over and over again -- parishes typically use the oil only once a week, meaning it is less abused and requires minimal processing.

"We get all of the same horsepower out of it, same miles per gallon, and when we're driving down the road, it smells like chicken wings or jalapeno poppers, or this time of year, it would be fish fries," Kovacik said.