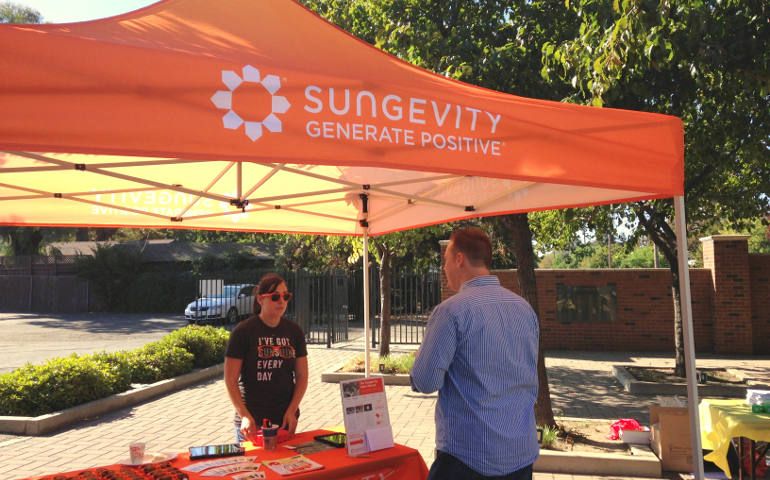 Tom Hollcraft, right, speaks to a Sungevity sales rep Aug. 16 at the launch event for the Stockton, Calif., diocese's new solar panel program. Sungevity, an Oakland-based company, is one of four partners in the program. (Photo courtesy Katelyn Roedner Sutter)

On Saturday, the Stockton diocese officially launched a new project aimed at spreading solar energy in the community, while at the same time reducing electricity bills and raising funds for the local church.

The project is a partnership of the diocese, Catholic Charities of Stockton, the Washington-based Catholic Climate Covenant and Sungevity, an Oakland-based solar company. It allows area Catholics who install solar panels through Sungevity to slash $750 off their costs, and earn an additional $750 referral fee for one of three participating parishes: the Cathedral of the Annunciation, in Stockton; St. Anthony of Padua, in Manteca; and Sacred Heart, in Patterson.

Half of each fee ($375) will go to the parish, while a quarter each is allotted to Catholic Charities and the Catholic Climate Covenant, which will use the funds to expand the program in other dioceses.

“But this is so much more than about raising money. It is about doing the right thing by our faith,” said Stockton Bishop Stephen Blaire Saturday during the launch.

“With each solar installation, we are saying to our Creator: we are personally committing to being better stewards of creation by harnessing the power of Brother Sun, as St. Francis [of Assisi] would say,” Blaire said.

“I am enormously proud of this new venture because it says that the Catholic community understands that we are in a new age: an age where care for creation and care for the poor are top priorities in a world threatened by environmental harm,” he said.

Dan Misleh, executive director of the Catholic Climate Covenant, told NCR he had been looking for a diocese to test pilot a solar program. Stockton became a logical starting point not only for its near-yearlong supply of sunny days but also because of its established commitment to the environment.

In 2006 the diocese established an environmental justice program -- housed in Catholic Charities and currently directed by Katelyn Roedner Sutter -- whose early work included advocating for the California Global Warming Solutions Act of 2006, which requires the state to lower greenhouse emissions to 1990 levels by 2020. Other efforts have had them working with statewide coalitions for cleaner air and water and more sustainable communities.

In addition, Blaire has been one of the more outspoken bishops on environmental issues, particularly during his tenure as chair of the Committee on Domestic Justice and Human Development of the U.S. Conference of Catholic Bishops.

Sutter told NCR one of the appeals of launching a solar program was it provided a tangible way for Catholics to care for creation on a daily basis. The diocese and Catholic Climate Covenant partnered in 2013 and examined bids from seven solar companies, seeking an affordable option for homeowners but also one with the ability to support outreach and promotion.

They ultimately selected Sungevity, in part because of its track record of similar partnerships with nearly 100 non-profit organizations, such as the Sierra Club and New York Interfaith Power and Light. In July the company hit the $1.5 million mark in funds provided to non-profits since its partnership program began in 2011. So far, 2,100 homes have gone solar through the program, offsetting 320,000 tons of emissions, said Dermot Hikisch, director of new partnerships for Sungevity. That equates to 7.7 million trees planted or 757 million miles not driven.

About 50 people attended the Stockton diocese's launch Saturday. About a dozen signed up for quotes, and so far one person has already installed a system.

For those considering solar panels, Hikisch said Sungevity uses remote solar design to virtually create a system so homeowners can see what the panels will look like, how much power they’ll generate and what savings can be expected before signing a contract.

Systems can be purchased or leased at little to no upfront cost. Hikisch told Catholic News Service that monthly costs on a 20-year lease range from $20 to $100, while purchased systems take seven to 12 years to achieve payback.

In a solar contract, a customer generally locks in a flat rate that can escalate slightly each year but more stable than fossil fuel-based rates. On its website Sungevity estimates savings can reach $10,000 over 15 years on an energy bill; the company includes a performance guarantee in contracts and promises to pay the difference if a system generates less energy than projected.

For now, the Stockton solar program will limit itself to the three parishes, but Sutter said they’ve already received requests from others interested in joining. Misleh said they will evaluate the program every three months and if it proves successful, could expand into other dioceses in the state or across the country.

“That’s the goal, is to try to make this available for everybody,” he said.

“If we can ask the facilities managers of each of those buildings to lower their energy use by just 10 percent -- which is very doable with simple technology -- that would be quite a powerful example to their communities and to the country,” he said.

In Stockton, the next steps will look at extending the program to additional parishes and the feasibility of placing panels on parish and diocesan buildings. In the meantime, attention will focus on creating awareness of the program and helping homeowners install panels.

Getting people to adopt solar technology has its hurdles. One of them is understanding how it works; others range from maintenance (which Sungevity covers), to skepticism of new technology itself, to aesthetics or neighborhood regulations. Misleh hopes they have alleviated concerns by doing the homework of vetting various companies electing to partner with Sungevity.

“Essentially the diocese and Catholic Charities is saying we guarantee this product: It’s a good company, they will do good work, they met all of our criteria,” he said.

Sutter hopes the message the solar program emits to area Catholics is that creation care is a part of who they are as a people of faith.

“I think it sends to the larger community a similar message that Catholics really care about the world around us. Not only the people around us but also the natural world that all of these people live in, that we are, we take a very holistic view of what it means to respect life,” she said.

[Brian Roewe is an NCR staff writer. Follow him on Twitter: @BrianRoewe. Catholic News Service contributed to this report.]