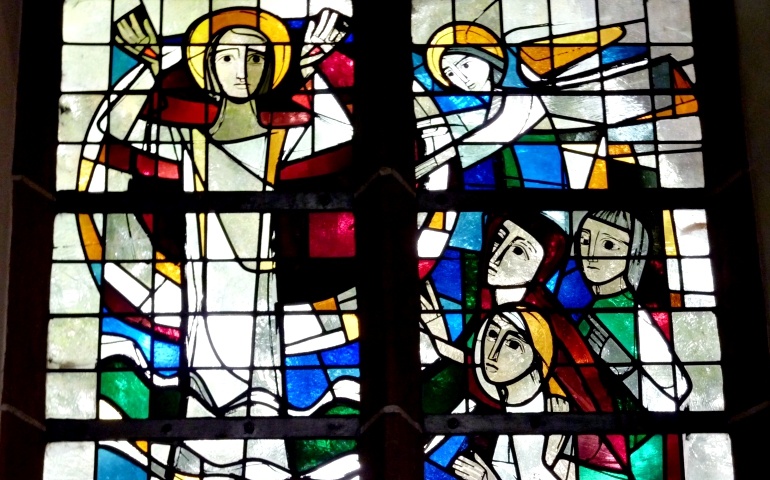 Perhaps you have heard before, but today it's important to remind ourselves that the Gospels are not a biography of Jesus; they're not really a history of Jesus and his life. They are theological documents telling us about Jesus, who he is, why he came, what he asks of us, and so on. It's important to remind ourselves of that because the picture that St. Luke gives us in the first lesson today from the Acts of the Apostles is such a vivid picture that I'm sure every one of us remembers it from the time we were very young and first heard this description.

Jesus calls his disciples together, they go to the Mount of Olives. He speaks with them for a brief time, and then he begins to ascend up into heaven. They stand there looking and wondering, and the angels come and say, "Why are you looking upward? He's gone."

But that didn't happen. That image that we have was the way that St. Luke constructed his Gospel and the Acts of the Apostles, according to a format that he had designed that would bring out the meaning of Jesus — why Jesus came, who he was, and what he was about. He wasn't trying to give us historical facts.

So it's important today as we celebrate this feast and we listen to these lessons that we take to heart the message that is given to us. Probably the first thing we should reflect on is what is the meaning of the Ascension?

Luke describes it in that format that I mentioned and he sets it according to a pattern. He has designed his work so that 50 days after Easter would come the feast of Pentecost that the Jewish people celebrated. But now he joined with our Pentecost — the 40 days that Jesus supposedly was on the earth coming back and forth to the disciples.

Matthew puts the 40 days in the desert; there's the 40 years in the wilderness, and so on. Luke uses this pattern to set up what he wants to teach us.

Probably the most important thing that he teaches us and the first thing that I want us to reflect on is: What do we mean by this exaltation of Jesus?

In our second lesson today, St. Paul, in writing to the church at Ephesus, describes how God revealed God's power in Christ when God raised Jesus from the dead and had him sit at his right hand in heaven far above all rule, power, authority, dominion or any other supernatural force that could be named, not only in this world, but in the world to come as well.

What Paul is describing is the reverse of what Paul has in the letter to the church at Philippi. Paul describes how Jesus, who though he was God, emptied himself, took on human flesh, became fully human, gave himself over to death, even death on the cross, and therefore God raised him up, set him above all creation, and every knee on the earth, under the earth, above the earth falls in adoration.

What Luke is describing is how God has reversed what happened when Jesus emptied himself.

Though he was God, he did not think his divinity was something to be clung to, but emptied himself, became one of us, fully human with all the human deficiencies that we have in our human race. Jesus was one of us, like us in every way except sin, even though at the same time he was fully Son of God.

This feast day that we celebrate, as Paul describes it here, shows us how God reverses that emptying that Jesus underwent to become one of us. Now at the time Paul was writing, the religious culture in which he wrote had all different levels of gods and super gods and lower gods and so on.

Paul is saying Jesus is above all of that. He is Son of God, fully God, but also still one like us in every way. It's a tremendous revelation and a mystery, but it shows us who Jesus is and shows us what Jesus has done in exalting us as his brothers and sisters.

The other important thing to reflect on today is the message that Jesus gives to his disciples where, in the Acts of the Apostles, Luke says that Jesus said to them, "You will be my witnesses in Jerusalem, throughout Judea and Samaria, and even to the ends of the earth."

Why? Because, as Jesus says in the Gospel, "you are to go out into the world and spread the good news, make disciples of every person, teach what I have taught, help people to understand who I am, what I stand for, make disciples, people who are ready to follow me, Jesus."

For 2,000 years, we've been trying to carry out that command, down through history. Today, it's our responsibility to be witnesses to Jesus. It's important then to ask ourselves, "How should I witness?"

One of the things that we really have been blessed with in the last couple of years is the way that Pope Francis witnesses. Jesus said, "Go to the ends of the earth," and that's what he wants — his message to go everywhere.

What has Pope Francis done within the last 10 days? He's named five new cardinals. That might not seem all that important and yet, he continues as he has in the other times he named cardinals (these are leaders in our church, those who show us the way to be witness like the pope does); he's going to the ends of the earth.

We have allowed our church to become so Eurocentric and so focused on the West that we failed to reach out to the ends of the earth. Francis is showing us.

I'm sure there are some people in Europe, in the United States, who thought, "Maybe I will be a cardinal." No, I don't mean me; I'm quoting the bishops of some of the big archdioceses who thought they would be named cardinals as they had been in the past. Francis skips them and goes to the outer boundaries of where the church has failed to reach.

He's showing us how to go to the ends of the earth. But then it's even more important: What does he witness to? One of the things that the first disciples in the Acts of the Apostles still don't get is what Jesus has been trying to show them. Now, here it is in Luke's version, the very end of the time that Jesus is going to be with them, and some of them are still saying, "Is it now that you're going to restore the kingdom of Israel?"

They're still looking for a warrior leader to throw out the Roman Empire, overthrow the Romans and re-establish the Jewish nation as it was. They're looking for a warrior ruler, even at that very end of the time that Jesus was with them. They want a warrior, somebody who is going to use violence and force to overcome their enemies.

That was not Jesus. Nowhere does he ever allow his disciples to use violence, even to protect him when they were coming to arrest him, to persecute him, to execute him. "Put away the sword," Jesus tells Peter when Peter tries to use violence.

Just this past January at the World Day of Prayer for Peace, Pope Francis issued a beautiful document in which he emphasizes and reminds us that from the very beginning the church, because it was following Jesus, rejected violence and war and killing. Francis is trying to call us back to that. That's how we need to witness instead of trying to be the most dominant nation in the world with the most powerful nuclear weapons, the greatest number that anyone could have. We should be trying to seek peace through reconciliation as Francis has done.

He's gone into the Central African Republic where a civil war is going on between Muslims and Christians. He goes armed and carries a message of peace and reconciliation and begins to change the situation.

He went to Egypt, where now twice Christians have been massacred, and he goes there to bring a message of forgiveness and reconciliation. That's how we need to witness.

This week, at the request of President Trump, Francis met with him. One of the things that he gave the president was his encyclical on the care of the Earth. God gave us this world, not to exploit it, but to nurture it, to make the world as full of life and as beautiful as it can be, and we have been destroying it. Francis has a different message and he passed that message on to President Trump.

Whether he'll accept it or not we don't know, but we should accept it and try to be witnesses to the care of the Earth, that we love our planet and all that God has given to us in this planet, even as Jesus did.

Do you remember in the Sermon on the Mount where he talks about the birds of the air, the flowers of the field? He loved the world around us and he wants us to do the same. Again, Pope Francis has been showing us how to witness.

If we follow Jesus and bear witness to his way, all of this will happen for each one of us and for our world, too.

[Homily given at St. Philomena Parish in Detroit May 28. The transcripts of Bishop Thomas Gumbleton's homilies are posted weekly to NCRonline.org. Sign up here to receive an email alert when the latest homily is posted.]