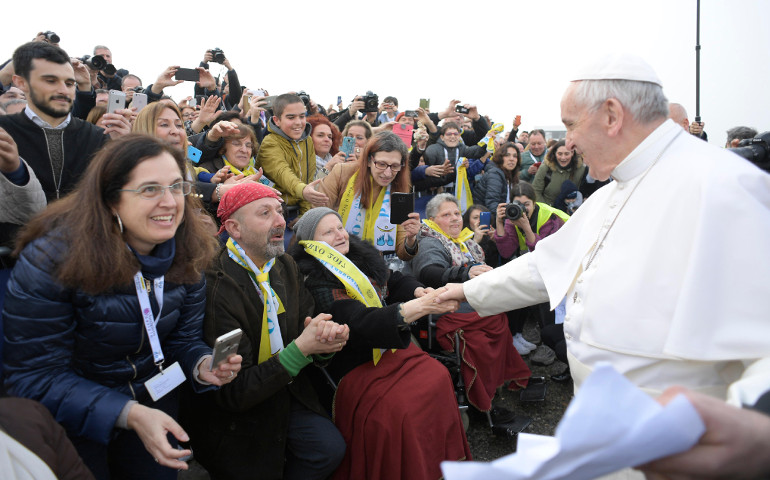 Pope Francis greets people as he visits the "White Houses," a housing development for the poor, on the outskirts of Milan March 25. (CNS/L'Osservatore Romano)

I know it seems strange that after you’ve gone through all this preparation for confirmation and … the parish family assured me of your readiness, I still ask you if you feel you’re ready and whether you want to be confirmed. It’s important that you say that and speak it out loud, “Yes, I want to be confirmed,” because then you begin to do a very important part of what this sacrament is about —you’re giving witness to your faith.

You’re assuring all of us by saying “Yes, I want to be confirmed,” that you do believe, that you know Jesus, that you want to follow Jesus, you want to be confirmed in the life of Jesus, so you’re giving witness to that faith. We’re grateful for that. But now as we go on, it’s important for the candidates, but also for the rest of us to reflect a little bit on the scriptures today to help us get a deeper understanding of this sacrament and what it means for us, what it calls upon us to do.

We learn that, I think, especially from the first lesson today from the Acts of the Apostles and from the Gospel lesson. Perhaps it’s helpful if I put it in a little bit of a context. You may remember a couple of weeks ago in our Sunday liturgy, St. Luke in the Acts of the Apostles described how there was division in the community, in Jerusalem because some of the members were being overlooked in the service to the poor.

It was a split among ethnic lines, actually, Greek-speaking vs. Jewish-speaking in the community of Jerusalem. The leaders of the community came together and decided they would ordain qualified people to act as ministers within that Greek-speaking community, so they ordained seven deacons. Those deacons began to preach and to teach and to minister to the people. But they went beyond the community in Jerusalem, as you heard today.

One of them went to Samaria to preach there and was making extraordinary progress in bringing people into the community, proclaiming the name of Jesus, and calling people to follow Jesus. They were doing it in great numbers. The disciples in Jerusalem, the leading disciples, Peter and John, felt that it was important to go and to affirm what was happening there. Also, by doing that they were making those people in Samaria aware that they were part of a larger community.

It wasn’t just people in Samaria now following Jesus; they were joined with the church in Jerusalem. The church in this way was beginning to spread throughout the world. As Jesus said, “You will be my witnesses in Jerusalem and Samaria and to the ends of the earth.” Peter and John came, laid their hands on the newly baptized converts, and brought them this special outpouring of the Holy Spirit so that they could do the work as part of this larger community.

The same thing is happening today. All of you candidates wrote a letter to me about why you wanted to be confirmed. They were very rich and beautiful letters. Many of you mentioned how important your parish community is to you. Some of you said that this is the only community you’ve known in your life. You’ve been coming here since you were very young, as members of this community, and it’s important to you.

But we’re being reminded today by that first lesson that your community doesn’t end here. We’re part of a bigger community, the Archdiocese of Detroit, the church of the United States, but the church of the world under Pope Francis. All of us are part of that community of disciples of Jesus that has now gone from Jerusalem to Samaria to the ends of the earth. It’s important that we be reminded of that. Pope Francis is giving us powerful, beautiful leadership.

It’s important that all of us remember that as Peter and John came to that community to remind them they were part of a larger community of disciples, so we, too, are members of this worldwide community of disciples of Jesus. It’s important that we follow the lead of Pope Francis, Bishop of Rome, successor to St. Peter, in a sense, here today, through me as a bishop reminding you by a laying on of hands, calling forth the Holy Spirit that you belong to this worldwide church that has a mission to transform the world into the reign of God.

That’s what our church throughout the world has to do. Pope Francis shows us so clearly by the way he goes anywhere, it seems, and everywhere, some of the most dangerous places. He goes to bring that good news. A little while ago, he went to the Central African Republic where there was a terrible conflict between Muslims and Christians. He helped to bring about a negotiated resolution of peace. He went a couple of weeks ago where there had been a terrible killing of Christians and he helped to resolve that place of conflict.

He continues to do that by reaching out to the poor, to those who are suffering, showing us that the mission of Jesus is a worldwide mission. Now we are all part of that. The second thing that the Sacrament of Confirmation reminds us of and it happens at our baptism, but it’s deepened and strengthened in this sacrament is what Jesus tells us in the Gospel lesson today. That’s a very beautiful Gospel. It’s part of the long conversation Jesus had with his disciples at the Last Supper; a time when there must have been kind of an overwhelming sense of sorrow in that upper room because they knew Jesus was about to be arrested and persecuted, tortured, and executed, and Jesus knew it.

Yet, he spoke to his disciples in a very loving, compassionate way, helping them to accept what was happening, to be at peace with it just as he was. That’s what he tells them, “I will not leave you orphans.” He’s going to be gone; he’ll be executed the next day. “I am coming to you. In a little while, the world will see me no more, but you will see me because I live and you also will live.” He’s talking about his Resurrection, of course; he continues to live on.

But here’s the most important part: He says, “On that day you will know that I’m in God, and you’re in me, and I’m in you.” He’s assuring us that in a very deep and special way through the Holy Spirit, whom he’s sending to us, we will live in him, he lives in God, he will live in us, and we will live in God. What greater gift could Jesus give to us than the assurance that we share the very life of God, the very love of God that Jesus through his spirit lives within us?

That’s the most precious gift that we could ever have. But then also, and finally, this brings to us responsibility. In our opening prayer, we ask that God would send his Holy Spirit upon us to make us witnesses before the world to the good news proclaimed by Jesus that it’s our task to show that God loves us, God lives within us, but God loves all people. God loves this planet, wants it to be cherished and to be nurtured. God loves all of us; God wants us to give witness to that.

Once more, I find it so marvelous and just such a great blessing that Pope Francis himself is such a beautiful witness to what Jesus teaches. I’ll just give you a couple of examples. It was five or six weeks ago thereabouts, where of all things, one of our national newspapers wrote a beautiful editorial in The New York Times about Pope Francis. It caught the attention of the world as expressed through this national paper of ours.

The editorial was an editorial describing and praising Pope Francis for his outreach to the poor. You know how all of us are confronted every day by poor people on our street corners begging, people that simply don’t have what they need for a full human life. That’s only a small segment of the poor throughout the world. But Pope Francis was teaching us, and The New York Times praised this, that it’s more than just writing a check and sending it to a charity. It should be very personal, interpersonal.

He even takes up the question that maybe they don’t deserve it. Maybe they’re going to go use the money and buy a drink. Pope Francis says maybe that’s what they need at the time. Why should we judge? It’s true. But also, he says there has to be interaction. He wants us to look into the eyes of the person, take their hand, show them you respect them as a human being made in the image and likeness of God. That isn’t our attitude very often; we look down on people like that.

Pope Francis is saying no, if you’re going to witness to Jesus Christ, you must reach out in love to these people, give them the dignity that they have as a child of God, respect them, and love them as you provide some help for them. What a marvelous example. It’s so easy if we really wanted to try to do it. But then even more recently, it was the custom, even here in the Archdiocese of Detroit when I was first ordained, which was over six decades ago (a while back), during Easter season, parish priests would go out into the homes of people of the parish family and bless their homes and bless the people.

Pope Francis, a week or two ago, arranged that he would make that kind of pastoral visitation. So, he called the parish priest in the town of Ostia and he told him, “I want to come and go with you to visit your parish families.” They went into public housing. Francis goes from one apartment to another in this public housing, enters the homes, chats with the people, and blesses them. What a marvelous example of reaching out in love.

Pope Francis shows us what it means to be a witness to Jesus. Today, as we celebrate the Sacrament of Confirmation, and you young people especially receive this renewal of the Holy Spirit that began in you at baptism, but the rest of us also who have been baptized and confirmed, I hope we all commit ourselves to be that kind of witness that we’re called to be, to spread the good news of Jesus wherever we go. We do that by loving one another as Jesus loved us.

[Homily given at Nativity of Our Lord Parish, Detroit, Michigan, May 21, 2017. The transcripts of Bishop Thomas Gumbleton's homilies are posted weekly to NCRonline.org. Sign up here to receive an email alert when the latest homily is posted.]