Don't shove away those in need 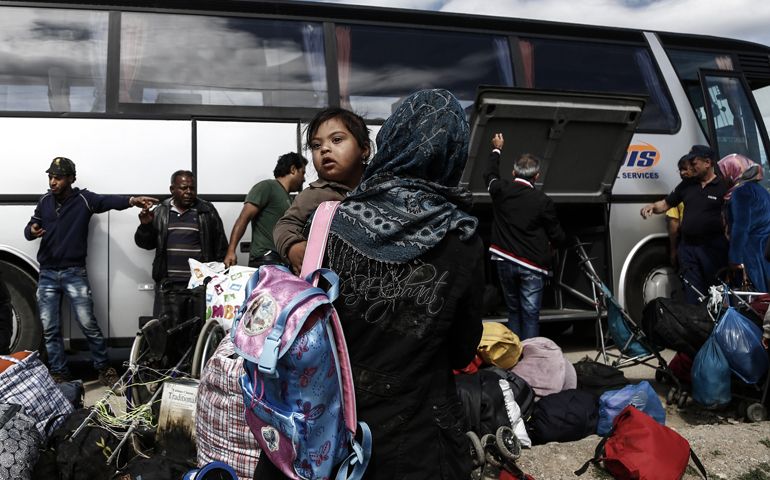 Syrian refugees stand outside a bus at a refugee camp near Idomeni, Greece, May 25. (CNS/Yannis Kolesidis, EPA)

I hope you noticed at the beginning of today's Gospel, how Luke tells us that when Jesus went into this home for a meal, he was being carefully watched. Why was that and who was watching him? What were they looking for? If you remember a few weeks ago in our Gospel lesson, Jesus said, "I have come not to bring peace, but to bring a sword, the sword of division." What he meant by that was that he was going to be preaching a challenging message.

That message would actually cause division; some people wouldn't like it. He would be challenging people to give up their selfishness, their pride --whatever fault, failure they had and to become more loving, more forgiving, more generous, especially the leaders, as we hear today -- the scribes, the Pharisees -- these are the ones who are watching Jesus. They were angry at what he was doing.

He was threatening them in their place of honor and power and wealth, so they wanted to catch him. Yet when he challenges them, as you notice, there's this person suffering with some kind of a dramatic disease and Jesus asks a simple question, "Is it okay to heal on the Sabbath day?" There were pretty strict rules about the Sabbath day, and they had arguments among the priests and the Pharisees -- the leaders, the teachers of the law -- whether you could or couldn't.

Jesus quickly answers the question when none of them would speak up; he healed the person. Yes, of course, the law of love overcomes any other rule or regulation. If a person were in need, especially in need of love and healing, of course you would reach out and do that if you follow Jesus. So Jesus really was providing a challenge to the people and to us. As he goes on in today's lesson and speaks about drawing people in, inviting people in, he said, "Go out into the highways, the byways where those who have the least, who are pushed aside actually by society or who are suffering in some terrible situation of violence, of war, and invite them in."

There's a lesson that we probably find difficult to hear and to follow. All of us, I think, must be aware of that terrible war going on in the Middle East, in Syria, for five years now, over 200,000 people killed, many others fleeing the country. Did you see the picture a week or so ago of the little boy that had been found in the rubble after a bombing? He was sitting there traumatized; you could see the blank stare in his eyes. He was reaching out, feeling his head, and discovering the blood.

We have, through our president, promised to take in 10,000 refugees from Syria. That would be one-fifth of 1% of those who have had to flee -- almost nothing. Where's our generosity as a people? Are we really going to build a wall and keep people out? Or are we going to be like Jesus, reaching out and drawing in those who are the least capable to take care of themselves because they suffer from extreme poverty or from violence and war?

Don't we have an obligation and love if they really are our brothers and sisters, as Jesus says, part of our human family? Are we not to do what he says, "Go out to the highways and byways and draw them in"? Jesus has been guiding us over the last few weeks as he is on this final trip to Jerusalem, teaching us, guiding us, giving us an example, and asking us to follow him. If we do respond to what Jesus asks of us, gradually, we will be building up the reign of God, which is described for us in that second lesson today, "You have come near to Mount Zion, to the city of the living God, to the heavenly Jerusalem with its innumerable saints. You have come to the solemn feast, the assembly of the firstborn of God, whose names are written in heaven. There is God with all the spirits of the upright brought to perfection, and there is Jesus, our mediator of the new covenant."

This is what we are called to do -- to spread the word of Jesus, his message of love, of forgiveness, of reconciliation, of sharing, of drawing all people into the one human family where there can be peace and joy and love, to build up the reign of God. This is what we're called to do, and as we try to do it, there will be those who will say, "No, we take care of ourselves first, take care of our own needs. We don't have to reach out any further."

There will be those who say, "Keep them out. Don't draw in those suffering, those who are terrified, horrified by war." There could be a split -- just as those leaders watched Jesus to accuse him because he was challenging them, if we follow Jesus and try to challenge ourselves and others within our community to always reach out in love. Don't make a human law like the law of the Sabbath greater than the law of love.

Don't ever shove people away who are in need. Rather, draw them in, become the one human family, living in peace and goodness and love that Jesus calls us to be. That's the challenge that we hear today from our Scripture lessons. As we go through this week, I hope each day we pray that each of us can live up to that challenge and follow Jesus and his way of love.

Parish | Don't shove away those in need

The Advent posada is an act of resistance

Greek Council for Refugees speaks with NCR about migrant crisis